Footsteps in the Snow

This happened to me when I was twelve, when I met a spirit. My grandmother lives near the Rockies, almost on the border of Arapaho National Park. I was visiting her for Christmas, and stayed in her cabin along with my two cousins and my cat, Sophie.

The first strange thing happened to me on the second day of visiting. I was still unpacking with my back turned to the door of the guestroom. I had the door closed, but when I turned around, it was wide open. I got spooked and nearly fell over. I peeked into the hall and saw nothing. I asked my grandmother why it happened and she explained that her house was built near an Indian burial ground, and that peculiar things regularly happened. She thought that a certain ghost was haunting her house.

She said that the last person who owned it was a young man of about 35. She said that on a dark winter night, he was driving home when the car slipped off the road and crashed. He was in the hospital, but didn't make it. She thought he came back because he missed his home. I didn't believe her, thinking she was pulling my leg, but was I wrong.

One night, it was particularly cold and my cat was sleeping with me. It was around 1:00 AM and I woke up to find my cat staring out the window. I got up to see what she was staring at, and was shocked to see a man standing in the snow, looking up at the window. He waved at me and walked back into the forest. I grabbed my jacket and went after him. When I was outside, he already disappeared. I had a feeling my grandmother wasn't pulling my leg, but that wasn't all.

Me and my cousins were going on a hike through the forest and it was still snowing. Halfway through the trail, I wandered away toward the burial ground. When I got there, I only saw a clearing covered in snow. I turned around to find my cousins when I heard footsteps from behind me, walking slowly through the snow. I turned around and saw something rustling in the bushes. A man emerged, looking pale and with a smile on his face. We stared at each other for a few moments until he politely asked, "Hey, could you help me?" He looked okay and he led me to the road, where a car was smoking fumes. It looked like it ran into a tree.

"Is there anyone you know around here who could help me?" he asked.

"I'm not sure. Follow me, maybe my cousins can help you." I led him back into the forest, the air still and silent.

After about 15 minutes, we finally found the trail. My cousins were waiting for me, angry that I wandered off. "Well, this guy needs help," I said. I turned to show him to them, but he was gone. I looked in disbelief. "Yeah right," my cousins said. I went back, but only found my footprints, and nothing else. But I could still hear him walking behind me when I found the trail. He just disappeared from sight, just like that. 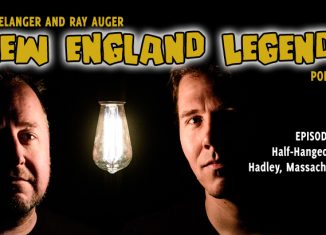