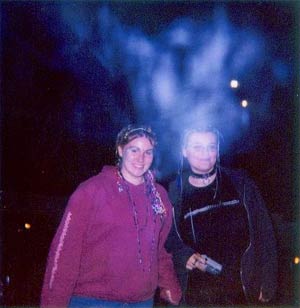 The picture was taken in Auburn, Massachusetts on Halloween night around 10 p.m. My friends and I were hanging out and I decided to take some pictures. Out of the ten pictures I took this is the only one which had anything strange on it. As far as I know there is no strange story that goes with this place, believe it or not it was at a Pub 99. But being Halloween night you never know.

Whether or not this is something supernatural, it still freaked us out. The picture was taken with a Kodak Polaroid camera. It is of me and a friend of mine, but there appears to be something else in the picture. What I originally thought to be a blur in the film caused by the developing process appears to be possibly something more than that. I have shown this picture to a few of my friends and they have mixed reactions, some believe that it is an angel, while others believe it is a ghost, but all see a human form.