In regards to these basement photos, the following is what happened: The exact date escapes me, but I know the photo was taken sometime this past January, 2002. The house located on the outskirts of both Hilton and North Greece N.Y. and was built in 1968. My parents and I moved into the house when it was brand new. Almost immediately strange things started occurring. My Uncle visiting from Ohio scared me to death one day after school, I did not know he was coming to visit nor did I know that when I got into the house he was there, until he peeked around the corner and when I screamed so did he. It seemed that about an hour earlier, he was resting when he heard running footsteps up and down the stairs and in other portions of the house. As he investigated the house and found no one there he locked himself in the bedroom... at least until I showed up. Then he told me what had happened to him. He was very shaken and his color was very ashen. That happened in 1968.

Since that time to present various strange occurrences have become normal. This incident in the basement though really scared me. Just my mother and I were in the house and I went to the basement to get rid of cobwebs. Using an old light weight vacuum cleaner I started to clean the ceiling. It was warm down there and the furnace was running on and off a lot. I must have finished half of the basement when I started seeing my breath. I turned off the vacuum and I heard the furnace running. All of a sudden this bone chilling cold went through me. I went over to the furnace and felt the heat coming out of the vent. Right next to the furnace was the entrance to the half cellar in which these two pictures were taken. I was somehow drawn to look in there. Not seeing anything, and the cold by now was almost disabling me, I ran upstairs and grabbed my camera. It was very warm upstairs. I ran back down in the basement and poked the digital camera through the entrance and fired off two pictures. I had to wait until I got home to access my computer, and when I did I found these orbs and a huge whatever towards the back of the space. 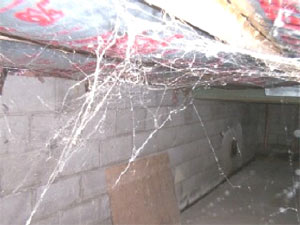 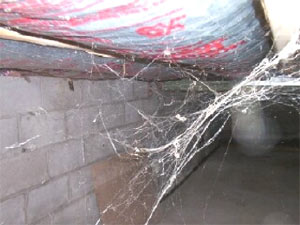 Another strange thing also happened when I was taking these pictures. Although the rechargeable batteries were almost new and fully charged (I can get approximately 50 pictures per charge), after the last of the two pictures were taken the camera went dead. I stayed at the house for about an hour afterwards (upstairs), in which time I tried to turn the camera on... nothing. On my way home I tried a couple more times and still got nothing. Then, almost home, I tried again and the camera fired up.

Later on I counted the number of pictures I wasted with flash. I took 47 shots, which means the batteries were fully charged and stayed that way until I wasted the energy. Attempts to take pictures in the basement after that with my daughter proved futile also.

What I would like to do is spend a wakeful night with cameras, video, and other equipment with live people. My mother now locks herself in her bedroom at night and leaves the TV on because she hears something walking the halls and some low talking sounds outside the door and walls of her room. Personally, besides that one time in the basement, I witnessed a vortex with my daughter. We were both walking the upstairs hall when we saw this huge dust like vortex come out of the bathroom, down the hall, down the stairs, and turn right into the kitchen. After we recovered from shock we ran to the kitchen and asked my mother and my wife if they were alright and if they had seen anything. They were alright and they had not seen anything, however it was a hot day and suddenly and for a brief moment they felt an ice cold breeze go by them.

One more thing regarding the basement: Along the left side of the photo is the fireplace cleanout door. Something there looks like a golden cross. I can't take a good picture of it and everyone is afraid to enter into the half cellar -- including myself.