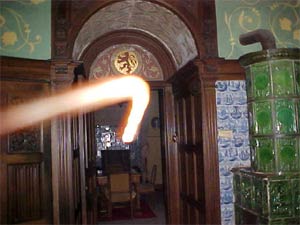 My mother was here in Germany visiting me and we went on a tour of the Castle in Cochem. I have believed in spirits for a long time as I have seen a Shadow person and also physically felt them. This is the fist time I have ever seen a picture! We were following behind the main group as we like to look closer at things. My mother was in the room behind me and I was watching her and waiting for her to catch up. She took this picture and then called me over thinking she had messed up the camera some how and wanted me to fix it. I told her it was a ghost (which she really didn't want to believe) and to take another picture. The second picture has nothing on it. She now has a stronger belief in spirits. We felt and saw nothing while taking this picture. It is a digital Sony camera. The lights were off in the room.