I just moved into my house one month ago. The night we moved in, I was excited and could not sleep -- I was laying in bed with my husband and he was asleep. At around 11 PM I heard scratching on the wall behind me. I laid there still, and scared, but figured it was a tree branch or something. I must have dozed off a while, at 4:45 exactly, my garage door opened completely and then closed. I thought I had imagined or dreamed it somehow, but in the dark not even realizing he was awake, my husband's voice asked "was that the garage" (that alone scared me) I said "Yes, did you lock it?" He said, "Yes." (We do not have an electric door opener yet.) He got up and nothing was different or missing -- like if we had been robbed. There wasn't enough time to have robbed us anyway, it happened fast. Everything was as we left it. We tried to sleep that night.

A few days passed and my husband asked me why I put all the boxes up against one wall of the garage (we had them organized by room to move them easier). I went out there and every box was stacked to the ceiling in perfect rows. My husband and I have three children, all of which are under five years of age, so we know they didn't do it, and we had no visitors.

My two year old son barely speaks yet, but about two weeks ago he started talking to no one. Just looking strait into a wall and said, "Hi," paused and then said "Ashton," (which is his name). I asked him who he was talking to, he just said him and pointed. No one there. I figure he said "Hi" and some unseen person asked what his name was. He just looked so sure he was looking at someone.

The entire month I've been here I always feel like there is someone looking at me -- like I'm being watched. My dog barks at the walls and scratches the floors for no reason. Also I constantly have the feeling of "Did I lock the doors and windows tight enough?" We are in a much nicer part of town so that shouldn't be such a worry. I catch movement out of the corner of my eye and nothing is there when I turn to look. I just don't feel comfortable or "at home" yet. (Which could be just a normal thing after a move but it's different and hard to explain how.) I also see a ripple, like from a pool, run across my mirrors when I'm putting on make-up and stuff, it happens in a part of the mirror I'm not directly looking at.

Finally two things happened yesterday (which drew me to look for ghost sites for info). I was in the shower and my husband and children had gone to the park, so I was alone. I heard a knock in the bathroom and I thought the family was back so I said, "come in." The door was already open a crack but then it slowly opened all the way. The bathroom got very cold, even with the hot water from my shower, which had fogged up my glass shower doors. I felt scared and quickly finished up my shower and got out. When I was drying off, I looked at the shower door and in the steam it said "Ashton not home". I was so freaked out I ran over to the park in just my rob and made my husband and family run back home. I raced into the bathroom and the steam was gone, but you could still barely make out the name on it. I pleaded with my husband to say if he had done it, but he swears he didn't.

Later that night I was making dinner, and the room got cold -- like a chill or draft, and I could smell perfume. I felt threatened. A different feeling then before, like I was in someone's space. I was so frozen by fear that I stopped cooking and we went out.

I hear children see purely and are able to see things due to an innocent, open mind that we adults don't have; that they can see things and believe things adults have been trained to not see over time. This just proves it to me. Both my kids have been caught talking to "no one" when they are supposed to be sleeping.

I'm ready to move now. My husband thinks I'm going nuts, "All these things can be explained," but no one can explain the feeling I have. Until I can find an explanation I'm going to continue believing we have a couple of house guest... or are we the guests?

I wanted to show you the picture I got back on a roll of film. No other picture had this weird fog, even pictures that were taken seconds before or after. 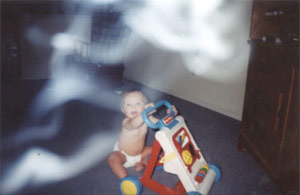