Family Spirits at a Birthday Party 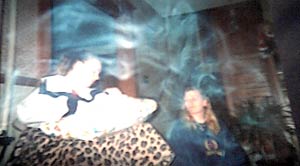 I have had this picture for a few years now but I have not really shared it with any one. I do believe this is the best picture I have ever taken. I need some feedback on what to do with it.

It was about two years ago my husband and I were driving big rigs here on the mainland U.S., but we were living in Hawaii at the time. We were going home for a vacation for a month or two and we were staying with a friend until our travel dates arrived. In those couple of days her 18 year-old daughter was celebrating a birthday and I had snapped a few of these pictures. I do have others on that day but this is the only one that came out like this. I didn't developed these until I got back home in Hawaii and I took my time getting them developed over there. But when I did, and I saw what I caught -- I had to tell my friend back in the mainland.

It was about four months when we finally got back to her house and I showed the picture to her -- she was really freaked out. She started to cry and she told me about her husband that had killed himself almost seven years back -- he had lupus and was in a great deal of pain. She or her kids have never really healed yet, but when I showed her the picture, she said that she always feels him and her grandma who she believes is watching over her. I made doubles when I had the pictures developed so I could give them to her. She and I are the only ones to ever see these pictures. Please tell me what you think. If you look even not so hard you can make out two sprits over them.