The following is an account of our visits to the mausoleum located at Capital Memorial Parks cemetery, 14501 North IH 35 in Pflugerville, Texas. Although the clock time may not be exact, the events, month, day and year are accurate.

I am convinced that this entity is trapped between two planes -- the living and the hereafter. I am also convinced that the entity is entombed within, or perhaps the keeper of the mausoleum. Also, most of the activity that occurs within this structure is centered on a family room with the name Dickinson above the door. The entity may be connected to this room as well. This room is located on the longest corridor of the mausoleum. It is also on this corridor where the entity’s presence in the form of the tea aroma, is sensed the most.

I chose to record my information, as it occurred, in a journal-like fashion. I will leave it to the reader to determine whether the information proves to be believable or unbelievable.

*Note - An aerial view of this mausoleum, shows the structure of the building to be in the shape of a large cross.

July 11, 2002 - Thursday - Arrived 12:45 PM and stayed until 2:00 PM. We took pictures and used a recorder. The ‘Tea’ odor present and noises are heard. When Regina listened to her recorded data later, a sound is heard that resembles the sound of a gun being fired. Regina heard the sound while we were inside the mausoleum, and she looked to see if I had noticed it as well, but I did not turn my head in the direction of the sound.

July 13, 2002 - Saturday - I visited alone between the hours of 8:45 AM and 9:15 AM. I took the camera and the recorder. The recorder failed to work properly after four attempts. I pushed play, but the recorder just stopped. I took a picture of a door to one of the family rooms. The door had fingerprints on it, but the fingerprints could not be removed, either from the inside of the room or on the outside. Immediately after I snapped the picture, the tea odor was in front of me, and then I heard noises that resembled the gentle closing of doors. (In the direction of north, south, east, and west.) At this point I decide to exit the building. I took two pictures outside the front entrance to the building. I was standing in such a way that I shot the picture through the front door with the back door and outside the back door in view. When I later developed the pictures, what looked like a shadowy figure was standing just outside the back door. The entire time I was at the building that morning, I sensed that I was being observed.

The morning was a cloudy, sullen one. 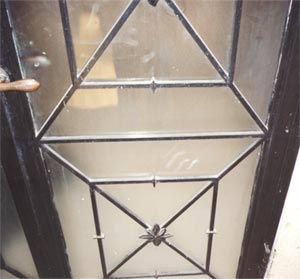 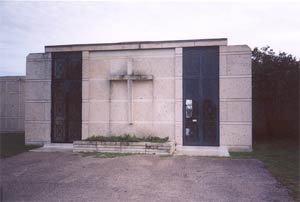 July 16, 2002 - Tuesday - We arrived at 11:00 AM on a rainy day. No activity, tea odor or musty odor sensed. The area had apparently been cleaned between Saturday afternoon, July 13th and today.

July 19, 2002 - Friday - Visited between the hours of 12:45 PM and 2:00 PM. Sunny day. No activity sensed, but very faint tea odor apparent. Many wasps were flying about that day; aggressive. I took pictures this day. As I take the pictures I see nothing noteworthy through the lens. I picked up the pictures on July 25th. In one of the photos of the family room (Dickinson room) with the fingerprints on the door, there sits inside the room an object that resembles a chair covered with a sheet. This image was not present when I took the picture. From a scientific and architectural viewpoint, this image cannot be explained.

The day was sunny, hot and humid. Bees were present and flew very close. A couple of the ‘family rooms’ reeked of a very strong musty smell.

At 1:32 the tea odor was present briefly, then suddenly the odor passed through Regina and I like a wave, expanding some 12 to 15 feet in width, passing by us moving towards the entrance to the mausoleum.

I opened the door to a ‘family room’ looked in then closed the door. At this point another door is heard opening, (as though someone is exiting a room). I reenter the family room, holding the recorder for approximately two minutes, hearing nothing. Later, after leaving the mausoleum, we listened to the recorder and hear a static sound or a sound that is similar to the sound a television makes when it is experiencing transmission problems. This sound goes on for two minutes, the amount of time I spent in the family room. Note: the sound was not audible while I was in the mausoleum holding the recorder.

At approximately 1:50 PM Regina hears footsteps, shortly after that we exit the mausoleum for the day.

Afterward, Regina and I feel extremely drained. Later, I find out that Regina feels weighted, heavy, almost unable to lift her hands, like her energy and been exhumed from her.

I am convinced that this family room, the Dickinson room, with the fingerprints on the door, the appearance of an image inside, as seen in a developed photo, and the sound that was recorded while standing inside it, is a portal of some kind. Most of the activities we have experienced have involved this room. It is also my opinion that there may be a certain degree of evil associated with this area.

August 18, 2002 - Sunday - Sunny day with few clouds in the sky. We entered the mausoleum approximately 1:15 PM. It is very still inside. A flower odor is sensed as well as a whiskey odor. Noises that appear to be coming from the roof are heard, as one of the doors to a family room is opened. These noises resemble that of tiny feet running on the roof. A mud dobber flies toward me at one point when I open this same door. Once the door is shut, the noises cease. At approximately 1:30, as we open the door to the ‘Dickinson’ family room, the tea odor is sensed.

Other odd noises are heard.

The tape recorder picks up what sounds like a bird cawing. This sound is not heard as we walk through the mausoleum with the recorder taping. We leave the tape recorder running for the last few minutes, and we exit the building. There are no significant sounds picked up by the recorder today. Today is a Sabbath day; day of worship. Perhaps, spirits are not as likely to show themselves on Sunday.

November 14, 2002 - Thursday - 6:15 PM and very dark outside. We entered the mausoleum, surrounded in total darkness where nothing appears to be out of the ordinary. We walked toward the center of the mausoleum, past the pews at the front of the building. Then all of a sudden the temperature drops drastically and there is a spine-tingling chill in the air. We continued to walk further, realizing that the bitter cold air is following us. We quickly exit the mausoleum after spending an approximate time of five minutes inside.

The tape recorder is on play the entire time we are inside the mausoleum. We leave the cemetery at approximately 6:30 PM.

I receive a call from Regina at home later in the evening. A voice has been detected on the tape recording. The voice appears to be saying; “I don’t see it.” The voice sounds almost as though it has been electronically altered; very deep in tone and spoken in a slow manner.

November 15, 2002 - Friday - 5:30 PM. Pre-dusk. We entered the mausoleum. There is a bit of a chill in some areas of the structure. We walked throughout the entire mausoleum. Noises are heard, noises that resemble a door opening and closing. We stay in for approximately 20 minutes, and then step outside to hear the taped recording. Nothing unusual is noticed. We go back in, I walk with the recorder toward the back of the mausoleum, Regina calls out to me twice, we head toward the door, then a loud sound is heard at the front door (opening or closing) we immediately exit.

It appears as though the recorder picks up what we did not hear and does not pick up what we heard while in the mausoleum. The recorder does record the last sound we hear as we are exiting the building.

February 9, 2003 - Sunday - Approximately 3:45 PM we arrived at the mausoleum, and although it is a clear day with blue skies and a temperature in the low to mid sixties, we are greeted with a bone chilling cold and the sound of silence as we enter the mausoleum. We walked down each of the three corridors, opening doors to the family rooms and repeating the ritual as we have done in each of our prior visits. Not a sound is heard at first, only the strong musty smell of decay is sensed in the small rooms that forever imprison family members. Then, faint sounds are heard after five minutes are so, faint sounds are heard coming from the corridors that run east and west.

At this point, we decide to leave.