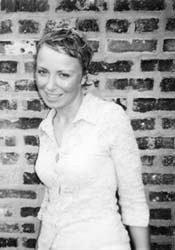 Ursula Bielski is an historian, author, parapsychology enthusiast, and the founder of Chicago Hauntings ghost tours. She’s been writing and lecturing about Chicago’s supernatural folklore and the Windy City’s paranormal side for nearly 20 years. She’s the leading authority on all things haunted in Chicago. Her books include: Chicago Haunts, More Chicago Haunts, Graveyards of Chicago, and Creepy Chicago.

Though her home base is Chicago, Ursula has investigated haunted locales all over the United States including: the Bell Witch Cave in Tennessee; the Oshkosh, Wisconsin Opera House; New Orleans’ House of the Rising Sun; the City Cemetery in Key West, Florida; and the Civil War Battlefield at Gettysburg, Pennsylvania.

A graduate of St. Benedict High School in Chicago, Ursula holds a B.A. degree in history from Benedictine University and an M.A. in American cultural and intellectual history from Northeastern Illinois University.

Ghostvillage.com caught up with Ursula to ask her about women in the paranormal and how she’s seen the field evolve.

I grew up in a haunted house near Wrigley Field in Chicago, where we’d be awakened by footsteps on the stairs in the wee hours of each morning. This was something that was constantly there, so I began searching early on for others with similar experiences in their lives. However, I began officially investigating the paranormal as an undergraduate history major, tagging along to help out with the field work of a friend who was working on a psychology degree, concentrating his studies on parapsychology.

Plus, my dad was a Chicago police officer, who introduced me to the ghosts at Graceland Cemetery, Montrose Point and the old lockup at the storied Maxwell Street Police Station. Since that time I’ve been involved in countless investigations of haunted sites in and around Chicago, including such notorious locales as Wrigley Field, the Congress Hotel, the Indiana Dunes, the Red Lion Pub, Hull House, Bachelors Grove Cemetery, Rose Hill Cemetery, haunted Archer Avenue, Chinatown, the Eastland disaster site, Death Alley, Dillinger’s Alley and the St. Valentine’s Day Massacre site.

As a woman, I’ve encountered some of the same difficulties that women encounter in any field: difficulty being taken seriously being the number one. Specific problems with paranormal investigation? Always being assumed to be the male investigators’ “sidekick” or assistant; being afraid to venture into certain places alone — such as abandoned buildings — as men might feel fine with; and of course, having very serious ideas about the investigative site when male colleagues sometimes have only one thing on their minds!

Overall, the most difficult problem is one that so many women find frustrating: the severe, severe limitation of our work due to the needs of our children and families. Whereas before marriage I could spend all my time investigating, doing overnights, weekend after weekend, and working on book after book every evening of the year, that’s far from true today. With two little girls, I had to make the hard choice to care for them first and foremost, despite the pull of the paranormal. And that’s meant falling behind the other hardcore investigators and writers that put their paranormal pursuits first, but I try to just focus on what I’m doing and be patient enough to do it well, even if it takes a long time in small snippets .

I think that the “men’s world” of tech research always goes before us these days, because of shows like Ghost Hunters. It’s very challenging to convince people that there are more subtle, sensitive — I guess you might say “feminine” — way of coming at the phenomena.

Women are in general more aware of the nuances of family and other personal situations, and many researchers have discovered that this is so important. I find that men tend to go into an investigation saying to the family: “Okay, thanks for the lead, now leave so we can figure out what’s going on.” Women are, I think, more aware that the relationships in place at the site have everything to do with the phenomena.

That we’re all sensitives. I have no paranormal sensitivity at all as far as I can tell, but my female sensitivity to the emotions and experiences of others — as a mother and just as a woman in general — is real and invaluable.

As the Queen of all things haunted in Chicago, and a chronicler of many ghost encounters, do you feel you have a different approach to paranormal research compared with your male counterparts?

Oh, absolutely. See the above, of course: I am much more interested in studying the relationships among the alleged phenomena and the experiencers than with proving or disproving the phenomena.

Of course, women are doing their thing more and more everywhere, but it comes down to the same thing I mentioned earlier: paranormal investigation is an avocation for almost everyone, men and women. Even for me, our Chicago Hauntings tours are what I have to spend time on each day, as they put the food on the table: that’s my job. The investigations, the research, the books: this is what I do when I have spare time. But as a wife and mother, that spare time almost always goes to my family. Many men have a much easier time justifying spending time on their paranormal pursuits, reasoning that it’s important work that must be done. So if an investigation opportunity comes up, a man is more likely to be able to say: I have to go, and my wife will make breakfast, lunch, and dinner, do the laundry, and get the kids’ homework done!