Paranormal investigators have strayed from the term ‘ghost hunter’ as they fear it implies the hobby parts of the paranormal field and that their time spent would be for fun only. The term ‘investigator’ or ‘researcher’ is now used for those dedicating their time and energy to follow the scientific method and make strides within the paranormal field by using whatever tools might assist; any tool that might communicate with the dead. One of these controversial tools is the Frank’s Box; a tool that seems to only work when broken. Not broken exactly, but modified to be a radio receiver that facilitates real-time communication to the other side. The Frank’s Box is not terribly unique, aside from its creator and his sources, and is only one of many I.T.C. devices. Instrumental Transdimentional Communication (ITC) devices can be any electronic device that is used to attempt contact with nonhuman entities. Fax machines, tape recorders, computers and television sets are all examples of I.T.C. but perhaps the Frank’s Box stands alone among them because of its history, reputation, and controversy. Originally built after inspiration and possible spirit communication, Mr. Frank Sumption created the Frank’s Box to further his own passion within electronic voice phenomenon (E.V.P.) and bridge a gap for communication with nonhuman entities. Each box is unique in Frank’s design and individual construction, but is based on the same principle: disabling the scan-lock mechanism and keeping the machine ‘sweeping’ through the frequencies at a predetermined rate. 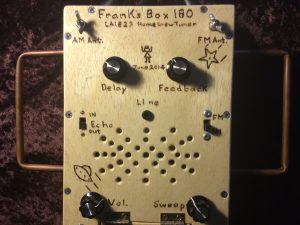 I myself am no engineer, however Frank Sumption has published his Frank’s Box instructions for all to follow and share, so I did just that; it wasn’t too terribly difficult. Having used this device once before in 2008, it was unique to simply break open a simple radio and begin to hack its parts to fit my needs as an investigator. Low and behold, after making a modern day “Shack Hack,” “Ghost Box,” “Spiricom,” or what I dubbed the Paranormal Sarah “Boo Box,” the radio started hissing at me. Is the scrambling noise simply loud bustling mixtures of the radio stations, jargon, or indeed a form of transcendental communication to the dead? I first considered the power of suggestion honestly and realized those that hold the spear of criticism illustrated with the theory that listeners are simply hearing what they want to hear may indeed be onto something. The power of the mind is grand. Is the hissing jargon simply pareidolioa and/or apophenia causing me to hear what I want?

Perhaps this is the opening to just some of the many controversies around this device; that it’s broken to begin with and is no more than a busted radio providing me with answers I want. As many paranormal investigators will attest however, including Mr. Sumption, that spirits and other entities seem to communicate more easily when raw audio is supplied, regardless of the form or source and will answer you directly. With having had loads of criticism that range from automatic level controls increasing ‘gain’ to distort your messages, ducting of signals that may be interfering, or that the device is nothing more than an AM/FM receiver with hacked modifications and people are only hearing what they want; regardless, the experiences and testimony is what keeps the hope of the Frank’s Box alive. It is when you experience something that rationally and logically you believe that this ‘something’ becomes real, even if it’s E.V.P.

Most any paranormal investigators will tell you that there are many types of evidence one can experience as some form of proof that there is a possible ‘other side’ wanting and willing to communicate with the living. The Frank’s Box, however it manages to do so, does seem to provide unique experiences from paranormal investigators all over the world that they simply cannot ignore, despite their efforts to recreate the experience to others. The scientific method is often distorted and used as a tool for criticism of the Frank’s Box, forcing the belief that a researcher be able to observe, record and repeat his/her findings and the Frank’s Box cannot always do that. However, the scientific method is more about questioning, hypothesizing, researching and then finding a conclusion; is that not what we are already doing? Believers of this box state that trying to measure a tool with a set of specific scientific standards that will not apply will never work and that perhaps experience and belief should be enough. As Frank Sumption said himself in defense of his machine once, any results are private messages intended for the listener only and that subjectivity is the strength of the Frank’s Box. Indeed parapsychology and paranormal researchers are tackling perception, subjectivity, reality and objective science every moment and trying to determine if objectivity is demanded of something to prove its validity.

No two people ‘hear’ the same, process stimuli the same (in regards to individualized meaning), and every piece of anything in this world will indeed be biased to the person perceiving it; this does not differ from paranormal evidence. Understanding simple neuropsychology and even Gestalt psychology illustrates how the brain typically organizes information but that is not always guaranteed. Not only can we misinterpret a message from the Frank’s Box via these processes but perhaps also the facts that we so depend upon to be solid, scientific standards. So how does one explain this box, how it works and what is going on? Well, perhaps spirits are using the ‘electromagnetic theory’ and communicating with voice modulated EM waves via the radio frequencies. Suggesting the spirits are intelligently using EM waves and speaking to us, thus the reason we need a device to interpret the frequencies. Perhaps you accept the more common belief that the entities are talking by way of semi-manifesting their own sound by manipulating and altering the existing radio sounds and white noise. I tend to imagine someone using an electronic larynx or communicating like Stephen Hawkins when I contemplate this theory. Lastly, perhaps you best adopt a theory that suggests the power lies with the listener… you. Perhaps you the listener are projecting thought, altering energy or influencing the outcome via telekinesis? The Global Consciousness Project has done work with EVP technology and suggests that experimenters may have actually affected the results of their studies via psychokinesis! If you believe in manifestation, power of thought, ‘thoughts become things’ or that all those Buddhist monks were onto something, this theory most likely sets well with you. Giving you the power to perceive, interpret, measure, experience and share; you as an observer are directly changing the universe. Slit theory and quantum mechanics here we come!

Regardless of where you come from or where you’re going with your paranormal research, we can only expect to learn from our past and grow forth to a brighter future; and that can only be done with an open mind. A fellow researcher, Dave Jacobs of Jacobs Paranormal Investigations, has experienced first-hand the ‘class A’ type evidence that answers intelligently to his questions and even called out a peers name with the Frank’s Box. He states, “This type of device feeds our human need for instant gratification” and thus in its simplest forms is the reason the Frank’s Box will continue to remain controversial. Whatever your conclusion, I challenge you to experience the I.T.C. world yourself and be a part of your own experiment. Since rumors and legends seem to think the Frank’s Box possibly started with concepts from the brilliant Thomas Edison, I’ll leave you with a comment from the man himself, “If we can evolve an instrument so delicate as to be affected by our personality as it survives in the next life, such an instrument, when made available, ought to record something.”