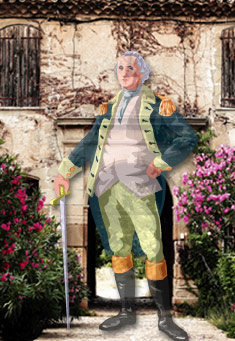 Throughout Virginia, Maryland, Delaware, and the Greater Washington, DC area, there are a myriad of quaint and historic Bed and Breakfast inns that boast a sign reading, “George Washington Slept Here.” Some of these old inns also happen to have a ghostly legend attached to them, and, invariably, someone is going to make the connection and give the “George Washington” moniker to those disembodied footfalls, strange knocks, and dark shadows.

So George Washington slept here one night in 1775 and now haunts the place forever, huh?

The B&B is another victim of what I call Most Famous Phenomenon. The good news is there is a cure for MFP. But before we learn the cure, we need to recognize the symptoms and understand why MFP exists in the first place.

As humans, we have a basic, egocentric need to understand the world around us. We want to know how things work, to control our environment (if possible), and sit securely at the top of the food chain wiggling our opposable thumbs for all the animal kingdom to see. We naturally get uncomfortable when presented with situations and environments foreign to us. An example: as anyone who has ever traveled to a foreign country where they don’t speak a word of the local language will tell you, it’s stressful. If you don’t have a guide who can communicate for you, you feel helpless. You know you’re going to have trouble meeting your basic human needs of eating, sleeping, etc., because you can’t easily express those needs to people around you. As psychologist Abraham Maslow would have told you, if you can’t meet the basic needs, everything else (security, love, esteem, and learning) ain’t gonna happen.

In a situation where someone believes they are dealing with a haunting, they may feel life is out of control. They may be afraid because they can’t understand what is happening around them, and that the world is no longer operating they way they were taught that it should. If we can put a name on the unexplained knocks, bumps, and murmuring voices, we can start to compartmentalize the experience and regain a sense of control (even if it’s a false sense of control, it’s still a sense of control).

George Washington would never hurt us, right? Plus, what could be a bigger draw than the first President of the United States forever walking the hallways of your B&B? Washington was the most well-known person to ever grace the building, so he must be the ghost!

In other haunts, it’s even easier to fall into the MFP trap. What about the Lizzie Borden house in Fall River, Massachusetts? Most of us know about the brutal double murder that took place there back on August 4, 1892. Both Lizzie’s father, Andrew, and her stepmother, Abby, were brutally hacked to death with an axe. All of the circumstantial evidence pointed to Lizzie, but she was acquitted of the murder. The crime went unpunished. Today there is paranormal phenomena reported at the Borden house, and some people jump to the supernatural conclusion that the ghost must be Andrew or Abby searching for eternal justice. Or perhaps the ghost is that of Lizzie who is doomed to remain bound to 92 Second Street in Fall River because of her alleged heinous crime.

The Borden House was built in 1845. Andrew Borden bought the building in 1872 from the original owner and lived there right up until August 4, 1892. Considering the house is over 160 years old, and the Bordens only occupied the building for 20 of those years, we can’t assume that any of the unexplained activity has anything to do with the most famous residents and the most infamous event that took place under that roof. Don’t get me wrong, the phenomena may be related, but we shouldn’t jump to that conclusion.

At the Borden house, there are many accounts of children’s footsteps, murmuring voices of young people, and child-like behavior related to some of the phenomena, such as toys in an upstairs toy chest being taken out and set on the carpet. Would the ghost of Lizzie, Andrew, or Abby Borden do this? If one digs a little deeper into history, we learn that there was a murder in the vicinity years before Andrew and Abby. According to the August 5, 1892 Fall River Daily Globe, “Another horrible tragedy had been enacted in the vicinity of the Borden residence. In the yard of the house occupied now by Dr. Kelly… Between [18]39 or [18]40… a woman named Borden had thrown her three young children into a cistern to drown and afterward jumped in and died with them.”

Investigators must avoid jumping to conclusions for the sake of our own egos. Witnesses, on the other hand, will often jump to conclusions for the sake of their own mental health. “It must be the ghost of my grandmother who died here last year,” a witness may proclaim. After all, grandma wouldn’t hurt anyone. We must tread carefully when working with families living in active homes. Holding on to a potential delusion may be helping a family deal in the short term. Don’t jump to conclusions before you’re ready to look at all of the evidence and present your findings. We should always seek the truth (even if the truth turns out to be a rodent loose in the attic), but we should always be considerate of the mental state of witnesses who have to live with the unexplained phenomenon. We’re here to help the living, too!