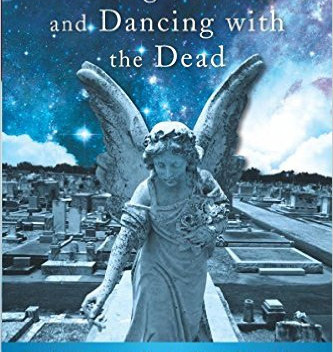 Ghostvillage.com’s Jeff Belanger recently asked Bloody Mary about her new book, the Voodoo life, and the ghosts of the Big Easy.

What is it about New Orleans that makes it such a hotspot for paranormal activity?

Geographically and energetically New Orleans is a port town and is also a portal. People keep coming and going here in life, and they still do so in the afterlife. For the living or dead, New Orleans is a big tourist destination.

And our city is below sea level, which keeps us down deep where life begins, pulsing with the ebb and flow of creation/destruction. The raw energy here within our swamp underbelly and our deeper direct ley lines, or dragon lines with Cairo, Egypt, Tibet, and others.

We also had held the highest mortality rate in North America for nearly two centuries.  Lots of death and many of them very close at hand, many cemeteries built over without moving the bodies, other bodies popping up when renovating courtyards and such.

I really believe it is more the living energy here providing that electromagnetism pull for the spirit activity here more than the death energy.

On the other hand, maybe it is plain and simple — its just Bourbon Street an the darn drinking that keeps the spirits active here!

But remember there really is never one simple reason for anything, including why is New Orleans so haunted.

How did you choose the name “Bloody Mary”?

There are so many things that just made that name click! The first reason is that my birth name is Mary. I also teach about the blood mysteries, I tell some of the bloody history here in New Orleans like our own mistress of blood, Madame Lalaurie, as well as all of the bloody horror stories of New Orleans are part of my storytelling repertoire. Bloody Mary worked in that respect.

The Bloody Mary Mirror part is definitely appropriate for me since the mirror is considered a portal to the other side.

My business name became a pen name and a priestess name too. In fact, it is federally registered and trademarked to me. So I really <i>am</i> Bloody Mary. I’m also related to Mary I, Queen of England who was known as Bloody Mary. There are so many reasons for Bloody Mary, but not because I drink blood, not because I do blood sacrifices, and not even because I partake in the cocktail Bloody Mary. None of these are my reasons, but all have been rumored so. Again, there is never one reason.

Have you ever said your name three times in the mirror while holding a candle?

But, of course! When I was young I went scrying in the mirror and chanted my name by the flickering flame. And I saw…

But then it was not the bloodied hellcat Bloody Mary. This yesteryear adolescent rite of passage led you though the mirror to see your future husband or showed you who you were in a past life. The bloody, hurtful, and horrific Bloody Mary evolved later. I write a bit about that on my new blog. Now, in an interesting twist, it is I that am haunted. You see it’s me that adolescents now look to on the other side of that mirror. I get hundreds of calls over, over, and over again in middle of the night.

Seriously, I am pranked by dozens of young girls every year: inviting me to their parties or begging me not to kill them. Sometimes I play along. Other times I get angry. And, very rarely, I threaten to come and get them if they keep calling to go on a quick astral trip through the mirror to kick ass.

How do you mix your Voodoo practice with paranormal investigation?

Technically speaking the African Fin language group, the word “voodoo” translates to mean spirit. So I could just say that is why, but that is not the only reason.

There is that old Voodoo philosophy of opening and closing the gates to the spirit world. The ritual ceremonial structure is an important part of any form of communication with the other side. There is also the Voodoo concept of feeding the dead, which I did long before I knew it was a Voodoo practice. The dead are hungry, and New Orleans is the place to be if you want good food.

Sometimes, I use dancing and/or drumming to feed the spirits, for Voodoo is a musical religion and a danced one. Where some people might use some form of EMF pump considered a sort of smorgasbord of battery food that modern paranormal investigators like to use, I prefer to just cook a good cupa’ gumbo and drum a little bit in order to connect.

People that can run around throwing curses and those trying to control spirits to do their bidding: people that misuse magic. People that think that they have to step on others in order to get some attention for themselves instead of connecting to the source. It’s people who scare me more than spirits. But “scared” is not the right word. I am annoyed, not scared, angered perhaps.

There have been individual healings where a clients or family member’s darkness has rubbed off on me. There was a nasty curse I dealt with where someone had sent a bad spirit to get me, which hurt and slowed me down until I conquered it and got my warrior’s reward, but I don’t really say that those were scary. Annoying, even painful, but not scary.

If you want to talk about scary monsters and demons etc… I’ve met a few. There are other dark things out there. The worst was probably after Katrina when the dark side was set free, and there were no checks and balances in play by our spirit protectors who had evacuated. I was scared for the city and the world on that one.

Do you have a favorite New Orleans haunt?

My favorite New Orleans haunts change as time moves forward. It is hard to say, but among my favorites are Laffite’s Blacksmith Shop Bar (my office and home away-from-home. I so very much love my spirits there in the French Quarter); of course my own home is a family of spirits so it is a favorite haunt, and Julie’s on Royal Street (the home of a spirit, Julie, that I am very close to), But we have to add the graveyards (far too many of those here to try and tell you a favorite). But there are spirits form each of them that may mentor me and those that I may mentor too.

Do you feel television shows like Ghost Adventures, Ghost Hunters, and thing like that help the general population understand the spirit world?

I believe it’s a double-edged sword. The shows are good because it makes the concept of spirits more main stream, and removes some of the stigma and fear surrounding that. However, some of these shows promote bad habits. Everyone who jumps on the ghost bandwagon won’t have good intentions, and other people are silly or just don’t use any common sense in their approach. You have to use common sense.

I also think that it’s important to believe that spirits are more there to help you rather than to harm you, but that doesn’t sell as many movies or shows. Hollywood does not trust that the market wants to hear about how to get along with spirits, but I hope to change that, just like you do, So with the book and my new Youtube show I will get the word out along with people like you and out there in Ghost Village that want to actually learn more.

Can anyone communicate with their loved ones or ancestors who have passed on?

Anyone can communicate with our loved ones passed. There are just different ways for every person to communicate, and there is a heavy learning curve. It’s about both the receiver and the sender’s capabilities. It also all depends on which is the best way for you to communicate.

Unfortunately, humans do not come with a manual of their own abilities; we have to search and study to perfect any of our gifts. You may have to use the old trial and error method to find yours. There are many methods of spirit communication out there: you must find what is right for you.

The most common way is, perhaps, through dreams. Dreams can be signs that you have established and worked with a spirit. Patience is also an important key with this new communication: it’s a totally new relationship to build. All relationships take work, so expect to train. It won’t always be as easy as five minutes, instant contact!

Is it safe to commune and dance with the dead?

I believe it’s not only safe, I believe it is required to communicate with dead. It be through song, dance, joke, prayer, EVP, DVP or whatever. Many older religions believe that connection with and respect for the ancestors will save humankind (I hope so). Those who built the land, and the family we live with, will help us thrive as a people if we give our respect to those architects. Some may want to dance, so that might be what you have to do. Maybe they just want to see, you and help you find your own way and commune.

Apply common sense and respect, that goes a long way. Unless you go breaking into a graveyard, harming tombs or bones, and or constantly provoking and speaking ill of the dead, then there should be no long-lasting trouble. Be respectful in every way. Do your cleansings, salt baths, carry your protections, and close the door behind you. BE NICE. Remember that you don’t need to visit remains to be with their spirits, and you don’t need all of the gadgets with you either. You just need to be still, have an open mind, and give thanks. Put the humanity back into paranormal investigations. I say really that we go on supernatural or paranormal missions and they definitely could include dancing!