Is there second sight? A third eye? Fourth dimension? Sixth sense? Though almost all of us have had experiences like I describe above, most of us wouldn’t label ourselves as psychics. Why don’t we? Maybe the answer is that all of us are sensitive to varying degrees. But what about the people who do slap the psychic, medium, or clairvoyant label on themselves? Today, thousands of psychics are offering their services in magazine ads, on Web sites, on television, and in stores along our Main Streets. It’s worth examining how we got here and maybe get a glimpse into where this movement is going.

Psychics, mediums, and clairvoyants. Because these terms are often used interchangeably, and their meanings often confused, I thought we’d start with some general definitions. “Psychic” refers to the realm of mental powers such as ESP, telepathy (mind reading, for example), psychokinesis, and the ability to glean the past, present, and future; “Medium” is a person who communicates with the spirits of the deceased; and “Clairvoyant” is a person who can see beyond the normal sense of sight. Some people claim to have all three of these gifts while others may only lay claim to one or two of these abilities. Many people also use the term “Sensitive” to mean a person who has these abilities to a lesser extent—feelings more than images and voices.

Throughout history there have been those who believe they had some mental powers beyond the realm of our normal understanding of the human senses. Even in the Bible, I Corinthians 12:7-11, the passage discusses gifts God bestows on man for the greater good:

History and religious texts are full of those who claim to be able to see the future, to communicate with the dead, and who can read your mind. Ancient Greece had its Oracle at Delphi – priestesses who were consulted over subjects ranging from when to plant the crops to where and how to wage war against enemies of the state.

In the backwoods and off-the-beaten-paths there were also those who weren’t endorsed by any governments nor mainstream society, but who were consulted nonetheless. These people had many labels over the centuries, but “witch” was the most common. There have always been those who have been perceived as gifted by some supernatural force and who were sought after because of insight they may have been able to offer. But what about our modern notion of psychics and mediums? That idea got started on Friday, March 31, 1848. 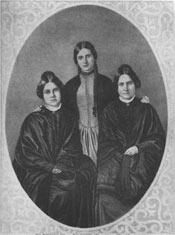 On the evening of this fateful day in Hydesville, New York—about 20 miles outside the city of Rochester in a small farmhouse that had a reputation for being haunted—the Fox family made a connection with the spirit world. John and Margaret Fox and their two daughters Kate and Margaretta had only been living in the house for four months when they first heard a strange knocking sound on the walls and disembodied footsteps throughout the home. Some of the raps were subtle; others were strong enough to shake the frames of the beds they slept in. The Fox sisters detected some kind of personality to the knocking and so they gave it a name: Mr. Splitfoot. The Fox family worked out a system where two knocks meant “yes,” and silence meant “no.” Spirit communication, according to the Foxes, was then established.

By the end of the weekend, the Fox sisters claimed they could communicate with the spirit of a dead man who conveyed that he was murdered on the property. Hundreds of people had witnessed the phenomenon in the farmhouse in the first few days. The Fox sisters went on to great notoriety and took their medium show onto stages around the northeastern United States. From those strange, early Spring raps on the wall, the sisters from Hydesville brought psychics into the mainstream, into the realm of entertainment, and in the process, started a new religion called Spiritualism that is still alive today.

Over the next few decades, the Spiritualist faction with its psychics and mediums heated up. In 1861, this movement received a significant push from the United States Civil War. Thousands were dying in the battle and grieving families weren’t getting all of the answers they needed or wanted from their traditional religions. But this growing movement of mediums offered promises of actual communication with fallen loved ones. Suddenly thousands were seeking medium services. Products like the Talking Board (better known by its modern brand name “Ouija”) were born, and practices such as spirit photography also got their start in this time period. Mediums held séances, others claimed to possess supernatural powers such as the ability to levitate or tip tables. Belief systems in the Western world were diversifying, and people were finding tangible proof of higher powers at work in the realm of psychics and mediums.

By the middle of the 1880s, the Fox sisters were struggling with the religion they may have unwittingly started. The women turned to alcohol to cope with the issues in their lives. Defenders of the faith claim the pressure of the “gift” was too much for them to bear. Detractors said the sisters’ consciences were starting to get the better of them and they drank to escape the guilt they felt for being a fraud. In 1888, Margaretta Fox made a speech denouncing their abilities saying everything was a sham. The mysterious knocks were said to come from the girls who could snap their big toe against the toe next to it inside of a boot to make an echoing response to any question asked. But even with the recant (and eventual re-recant of Margaretta), the belief system survives because enough followers were impressed with the psychic abilities of those in the faith.

The field has always had its charlatans—those who have attempted to cash in on the gullible, the foolhardy, and the grieving—but there have also been a few along the way who seemed to defy even some of the skeptics. Edgar Cayce, for example, spent over four decades placing himself into a deep, trance-like sleep where he could answer questions about topics that conscious Cayce could have no way of knowing. His assistants filled notebooks with his nuggets of wisdom and prophecies.

Others have come along and risen to a great deal of acclaim with book deals, television and radio shows, and public appearances. Many have questioned the legitimacy of these folks (and with good reason in most cases), but despite the accuracies, inaccuracies, and the words of the disbelievers, the mediums not only survive, but seem to gain ground.

I’ve interviewed many psychics over the years, some who seem very genuine, and many have echoed similar sentiments—like they have good days and bad days with their abilities; that sometimes the people their customers want to come through just don’t; and often the messages might not make sense at the time but may later. It’s imperfect, we know. But there’s something to this ability that draws in our curiosity and keeps us coming back.

Psychics aren’t just found on paranormal radio shows and in gypsy shops either. This morning I was watching faith healer, preacher, and television personality, Benny Hinn’s live television show and he interviewed author Dr. Charles D. Pierce, President of Glory of Zion International Ministries in Denton, Texas. Dr. Pierce claimed God spoke to him on a flight into Washington, DC recently and gave him very specific details about what the coming month holds. Pierce claimed that God said August 15, 2006 would be the beginning of a change in the Middle East. We know from watching the news that Israel and Lebanon are so far honoring their cease-fire. Dr. Pierce went on to claim that by September 15th there would be a coming together of God’s people for a new stand in unity. No matter how many follow-up questions Benny Hinn asked Dr. Pierce, Pierce had a reply with further details, always prefaced with “God told me…”

Dr. Pierce, of course, isn’t the only religious figure today who claims to receive messages about the future from God. Are the messages divine? Or just a hunch? Because of Dr. Pierce’s belief system, does he interpret his hunches and ideas as being from God? I don’t know. But I do know that even in our modern times with science providing so many innovations and answers, we still need our prophets, we still need magic, and we still need tangible proof of something beyond the veil of death. Certain factions of Christianity have people like Dr. Pierce. Those who are less religiously inclined have many psychics and mediums to choose from who can offer the same comfort that at least someone knows what the future holds.

Is spirit communication for real? Ask any of the billions of religious people who attend their churches, synagogues, temples, and mosques if they believe their god(s) hear them. Likely they have a hunch that something or someone divine is on the receiving end of their prayers. When we lose a loved one, someone really close, and we sense their presence nearby, or smell their perfume or cologne for some unknown reason, did we just brush the spirit of our loved one? Was it a sign just for us? I think so. Call it a hunch.

We all act on hunches. We do it in sports (I think the quarterback is going to throw wide, so I’m going to leave my man uncovered and try to sneak in for an interception), we act on business hunches (investing in some new technology you think will change the world in some way and reap its investors great financial gain), and we do it in our lives (I’m going to talk to that girl at the gym who looked over at me a few times and see if she wants to go get some coffee). All are hunches on what the future may hold—ideas pulled from our life experience, and maybe pulled a little bit from the ether. Some people listen to their good hunches and reap the rewards—we can all think of star athletes, coaches, business people, and those who simply live a very full life doing what they love. Other times we seek the advice of others because we trust their hunches. There’s something to it.

Psychics and mediums are here to stay. Religions will assimilate and incorporate them, parts of society will continue to shun them (because it never has been, nor will it ever be universally accepted), and they will always be closeby, because we just never know when we’ll need to seek their counsel.

On the most mundane of levels, psychics and mediums offer us entertainment and thrills. But there’s that part of us that wonders if maybe they really are in touch with something beyond our physical world, that hopefully someone knows what’s coming and can give us some kind of insight into our own future, and that there is indeed some connection between our world and whatever comes next.