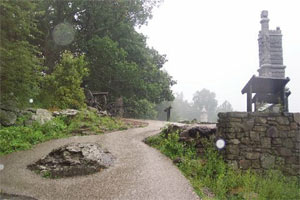 Here is a picture of Little Round Top I took early on the morning of August 25, 2005. The weather was cloudy, no wind, and temperatures were in low 80's. It was not raining nor did it rain until later in the day. I have always wondered about what appears to be a shadow behind the 2nd cannon. This is near the monument for the New York, I believe (don't quote me) 44th infantry.

My question has to do with an event which occurred at roughly the same place the night before. It was about 9:30 PM (the park closes at 10:00 PM) and my daughter and I were driving up to the Top slowly. I felt motivated to stop the minivan and get out. I was overcome by emotions which made me actually cry. I felt compelled to state out loud that all soldiers who had given their lives on this field of battle fighting for the North or the South should be proud of what they did and that they had no reason to feel bad about anything as it was a circumstance of war. I stated that they all fought valiantly and were considered heroes of their respective causes by the North as well as the South. I got back in the van and we proceeded to leave slowly when an orange orb the size of a basketball appeared alongside my driver's window. I felt no fright, only wonder as I have never seen anything paranormal and we continued rolling at about 15 mph. My daughter saw it too, and here is another strange part, she saw the orb as being white. The orb then shot forward, or for lack of a better word, seemed to stretch as "silly putty" does and moved to about 10 to 15 feet in front of the vehicle. To me it was the color of a pumpkin and the size of a basketball. It briefly seemed to form a smile and then shot up into the night sky where it rapidly disappeared. Can someone explain this one to me?