During the first week of August 2006, I happened to drive by a garage sale featuring a load of books in various conditions and on various topics. I always have to investigate such sales because something unusual oftentimes comes up. This stop was no exception. I came across an author name new to me. It was the noted psychic, Geof Gray-Cobb. His writings have been long out of print.

Looking through the books by this author, I came across these titles:

The Miracle of New Avatar Power

Secrets from Beyond the Pyramids

At ten cents a book, I bought them, along with about fifty other books dealing with the paranormal and supernatural. Since I was the only one looking at books at 8:00 AM in the morning, I felt lucky being able to take my time and not be rushed! By the time I was through browsing, the crowd started arriving.

Each title by Geof Gray-Cobb was a nonfiction work, each dealt with topics of the occult. The theme of psychic energy and its use seemed evident, and the material seemed well-researched. This individual had put a lot of time and effort into writing books containing accurate and helpful information.

What did I learn about the man himself? That was to come later through personal research on the Net to various Web sites, and a trip to the public library. Geof Gray-Cobb was born and reared in England, in an area close to Stonehenge and Glastonbury. He arrived in Canada during 1966 and is a Canadian. Much of his life was involved in science and the unexplained mysteries. Gray-Cobb’s goal was to apply psychic phenomena to people in a positive manner which would make their lives and existence more harmonious. He became a television celebrity along the way while continuing to write, conduct workshops, and lecture.

Geof Gray-Cobb’s writings make for interesting reading. You might run across your own copies of his books at a garage sale one day, and if you do, take a chance and buy them for some unusual reading experiences. For an interesting contact, Geof Gray-Cobb’s daughter has a Web site at: www.alternativeuniverse.ca 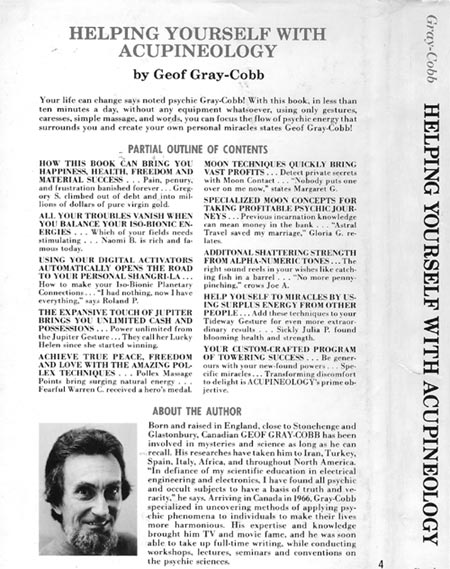