Recently a Minnesota police officer was highlighted in the KARE evening news for his heated post on social media. He had described on his Facebook account that a woman on her way to the hospital via ambulance for severe cardiac arrest, died en route due in part to the lack of respect on the road. No one yielded as the ambulance and police car blared their sirens; cars just continued onward. He described a diverse population of drivers that simply do not adhere to law, and that are also unaware of the social traditions to show respect to those in need.

In Minnesota, and in most states across the nation, there is an actual law that requires motorists to yield and pull to the right shoulder, even stopping their vehicles until the emergency services vehicle has passed completely. Yielding to a slow crawl on the shoulder rather than stopping completely is very dangerous for other drives. The drivers on the road simply do not learn the traditions of traffic etiquette.

It was after reading this article that I contemplated the old ditty’s my sister and I would sing; morbid but perhaps purposeful. 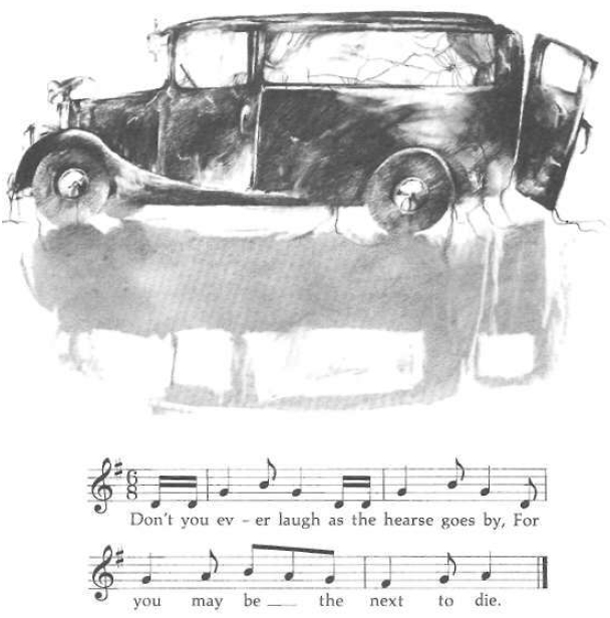 Don’t you laugh when the hearse goes by,
Or you might be the next to die.
They wrap you up in a big white sheet,
And bury you down about six feet deep.
They put you in a big black box,
And cover you up with dirt and rocks.
The worms crawl in, the worms crawl out,
The worms play Pinochle on your snout.
All goes well for about a week,
And then your coffin begins to leak.
And then you turn a slimy green,
And puss runs out like whipping cream.
You lap it up, with a piece of bread…
And that’s what you eat when you are dead!

Addictive and catchy, just spotting a hearse-like car on the road would cue the song. As morbid and strange as the old nursery rhyme might be, it also instilled some cultural tradition: don’t laugh when the hearse goes by. It implied to the listener that one should stop to show respect.

Just as hymns have served their purpose as spiritual motivation during the slave movement of early America, so have traditional songs and rhymes become a part of early American folklore. Scary stories around the campfire, songs sung aloud like the casting of a strange spell and humorous talk of death. Death was not so distant in early life, a time before technology, when each harvest or season production was reliant upon surviving. Lessons were taught through word of mouth and remembered most when utilizing fear or sing-song. Mother Goose Nursery Rhymes such as “Little Miss Muffett” teaching children to be cautious of spiders because they might be harmful. Old ditties and songs taught lessons and passed on tradition. What does the newer generation use to do this?

Has the ‘salad bowl’ of America become so diluted that culture has washed away? I know despite the nose curls and crazy stares, I will be teaching my little boys all about “laughing in the presence of a hearse” and I’m already proud to hear them singing, “Ring around the Rosie.”