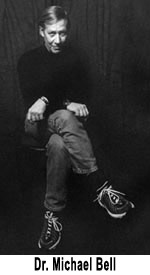 If it’s been passed around, exaggerated, or whispered about, Dr. Michael Bell wants to know about it. He is the author of Food for the Dead, the single best book available on the subject of New England vampires, and he is a regular lecturer on the subject of folklore, oral history, and the supernatural. Ghostvillage.com caught up with Dr. Bell to discuss the nature and nuances of folklore.

-Folklore is a dynamic process found in all cultures whereby the past is continually brought into the present, characteristically by people interacting together in small groups.

-Folklore is also the traditional body of knowledge, beliefs, practices, art, and literature that is passed down informally through generations by word of mouth and imitation of customary examples.

-Folklore is a form of culture or communication that is distinguishable from other forms, notably popular or mass culture (which is spread via mass media, changes rapidly, and has a short lifespan) and official or formal culture (which is sanctioned by established institutions and taught in structured contexts, such as schools and churches). Folklore, in contrast, is transmitted informally, is community based (and therefore varies from group to group), and persists over time.

You might have noticed that the descriptions above do not include some of the notions that many people may have about folklore, including that anything labeled “folklore” is untrue, uneducated, backwards, old fashioned, or dying out.

What’s the difference between folklore and an urban legend?

Folklorists have divided the forms that folklore takes into various categories or “genres.” Legend is a primary genre of folk narrative, and urban legend is one of several kinds of legend. (Others include supernatural belief legends, place legends, and heroic legends). Legends are conversational stories set in the recent past that include details, such as places and names, that give them the aura of history. Legends occupy that gray area between fact and fantasy, so telling them usually leads to debates about their facticity (or “truthiness” as Stephen Colbert might say). Urban legends are contemporary stories usually attributed to a FOAF (friend of a friend). The term “urban” is misleading since the subject matter or setting is not necessarily urban, although the stories do incorporate current themes of modern life (often city or suburban) such as crime, celebrities, technology and current events. As with all legends, urban legends need to be evaluated on a case-by-case basis to determine how much of their content, if any, is based on fact.

Several intersecting factors lead me to folklore. Growing up hearing stories — especially the personal experience stories of my grandmother and my father that were sometimes supernatural and sometimes just funny, but always worth hearing again and again — led me to appreciate storytelling and to wonder about things beyond my understanding. For example, how could my great-grandfather, who had been dead for a year, come back to save his daughter and her son (my father) from certain injury and perhaps death? After getting degrees in anthropology and archaeology, I decided that it was really the archaeology of memory that I wanted to pursue. I gravitated toward the intersection of belief and legend as my research interests began to take shape. When I’m able to choose topics to develop, I haven’t strayed too far from this area.

Considering our modern world with inexpensive and portable cameras and recording equipment, with thousands of newspapers and magazines, 24-hour news channels, blogs, and surveillance cameras in so many public buildings capturing every moment of our lives, does folklore still have a place in our modern society?

Of course it does. Informal communication of unofficial culture will never cease. The channels may change. For example, the Internet (especially e-mail) is now a significant channel for transmitting folklore. And, for that matter, even with the advent of the Internet, face-to-face interaction does not seem to be a threatened channel of communication. As long as people join other people to form small groups, folklore will continue.

What role does folklore play in the propagation of religions?

Most of the world’s religions arose in pre-literate eras, so they are based largely on oral tradition. In that sense, you might say that current religious traditions are based on folklore. Of course, that does not mean they are false. Looking at the many variations that all religions manifest seems to reinforce the notion that, in the early years, at least, they were created and then circulated via word-of-mouth.

How are legends born?

Legends take shape in conversation, when someone tells about something he heard or experienced that seems worth passing along to others. If the narrative is interesting or seems worth repeating, then others who heard it will keep telling it. As the story becomes part of oral tradition, it is altered by people (both purposefully as well as unintentionally) and the variation that is a hallmark of legends (and all folklore, for that matter) becomes evident. Legends and belief are inextricably intertwined. For example, if a story is totally believable or unbelievable, its chances of becoming a legend are very small.

Your book, Food for the Dead, explores New England vampire accounts and incidents throughout the 17th and 18th centuries. You’ve explored how people have dealt with the consumption epidemic in very non-traditional ways. What drew you to the subject of vampires?

I heard a family story about a vampire incident and it sparked by interested because it had all of the ingredients that I find attractive in folklore. Did it really happen? What beliefs underlie the vampire practice? Under what circumstances could one see these practices as reasonable? When I began to ask these kinds of questions, a fascinating world began to take shape: a New England that most historians either have ignored or were not aware of, one that was open to a magical worldview that was alien to the Puritan New England that we tend to extrapolate to the entire regions.

In Food for the Dead, it’s obvious many of the families who resorted to supernatural means in dealing with their “vampires” were in desperate situations. Considering all of the media attention the bird flu has been getting, do you think portions of our society could resort to the supernatural again should another pandemic strike?

People whose lives are in danger, and who have very few official resources available to meet that threat, will try whatever alternatives exist at the moment. In the case of life-threatening danger, people react in ways that they might normally consider irrational and superstitious. When our very existence is at stake and rational choices seems to lead to a dead end, we will look elsewhere. The fact that we still have a host of diseases that have no cure should give us some humility when we judge those who came before us. Given our own era’s failure to conquer disease, perhaps we are can appreciate the fear and uncertainty that tuberculosis embodied a century ago.

What role does folklore play in the realm of ghosts and haunting?

I think that our huge reservoir of supernatural folklore provides ways of culturally interpreting phenomena that otherwise would be inexplicable. Ghosts and hauntings are commonplace occurrences in our folk tradition, so we have a ready-made canon of interpretation when we encounter something that seems to have no rational explanation.