Extrasensory perception, or ESP — the sixth sense. Do we all have it? Is it a sixth sense or simply an as-yet unexplained extension of seeing, hearing, touching, smelling, or tasting? ESP is too big of a subject to tackle with just an article, so I wanted to touch on the “ES,” but focus on the “P” —  perception.

“Extrasensory” simply means experiencing something beyond the traditional five senses. The ghostly-inclined might immediately think of the experience of seeing a ghost — the visual sense of being able to perceive an apparition that others may not notice, also called clairvoyance. But there are many other examples of this, and the visual experience is certainly the most rare, even though it’s what we think of first. What about hearing a disembodied whisper? Or smelling cigar smoke or strange perfume even though no living person is nearby? And what about those gut feelings we get about issues in our life? 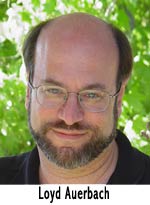 Loyd Auerbach is renowned in the field of parapsychology and is the author of books such as ESP, Hauntings and Poltergeists, and Ghost Hunting. I asked him for his definition of ESP. “First of all, it’s not extrasensory,” Auerbach said. “It’s not beyond what we normally have. It is extra beyond what we consider sensory perception. So it really covers those abilities to pull information in, whether it’s real-time, which would be clairvoyant to remote viewing, that kind of thing; precognitive from the future; or retrocognitive, from the past. It’s also the ability to pull information from objects and events. So with hauntings we’re pulling information from a place, which is very similar to pulling information from an object, which is what we call psychometry.”

ESP is gleaning information from someplace just beyond the reach of our traditional understanding of the five senses. ESP is part of most of our lives already, though we may not know it, or label it as such, but this perfectly natural ability came with your operating system and can be developed. The information or data is there — interpreting the data is the trick.

The term "ESP" was first used by French researcher Sir Richard Burton in 1870. In 1892, Dr. Paul Joire used the term to describe the ability of certain people in a trance or hypnotized state to sense external stimuli without using their traditional senses. There is evidence of the phenomena going back millennia, and the concept can be found in multiple religious texts, but in the late-nineteenth century, the phenomenon was given a name.

When discussing senses, emotions, and perception, there is little that is black, white, or red. The human experience is unique to every person on this planet. For example, why do I have an absolute weakness for peanut M&Ms? If the famous colored candies are in the house, I’ll eat them all. When I walk by them in the grocery store, my knees get a little weak, I feel the pores on my forehead open, ready to let forth the deluge of anxiety sweat, and my mouth waters in anticipation of getting my fix. For me, peanut M&Ms are my favorite treat. That’s my perception. That’s my reality.

For more help with perception, I gave my sister, Dr. Susan Belanger, a call. My sister has a Ph.D. in psychology, and if you don’t have a psychologist in your family already, I can’t recommend getting one enough. “Perception is an intensely personal experience,” Dr. Belanger said. “How I perceive the color red and how you perceive the color red could be very different.”

Okay, Sue and I were forced to share more than one crayon box growing up, and I can tell you that if you independently asked us to pick the red crayon, we both would have reached for the same one. “Right,” Dr. Belanger said. “There’s a concept of redness based on a certain wavelength of color, but how we perceive it, the richness of the color, the hues, could be different. Even a person who is color-blind can learn to identify red. They know red on a traffic light, and they’re perceiving red even though they’re not seeing red. So the perception of color is a personal experience. You might look at a certain shade of color and say it’s purple, but I would look at it and say, no that’s red. It’s the same stimulus — you’re looking at the same color crayon, but some people see it as purple and some people see it as red.”

Fair enough. But what about these gut feelings we sometimes get? I’m talking about a physiological reaction to an idea — like when you get a great idea for writing a story or a song; or when you have a terrific business idea that you know would be a hit. In the pit of your stomach you may feel something like butterflies, you may feel your entire body want to spring forward to chase this idea into reality. Is that ESP? Let’s ask the psychologist, then we’ll ask the parapsychologist.

“I’m not saying that it’s not ESP,” Dr. Belanger said, “but is that just paying attention to your past experiences and past behavior? Some people go through life with blinders on. They don’t pay attention to people, places, things, or their own feelings, so they don’t have a large database to build on. Other people do, so what you call a gut feeling I may call past experiences, or learning — learning from your mistakes and learning from your successes. If you do things enough time, you create a database of experiences so you can say, ‘Okay, I’ve done this so many times in the past…’ that you get good at anticipating what to do in the future. You can call that gut, or learning, or ESP.”

The parapsychologist: “A gut feeling can be ESP,” Auerbach said. “In fact, there’s current research going on over the last couple years by Dean Radin and others looking at what’s called presentiment. And that’s our gut — our bodies — know before something happens that something is about to happen. It doesn’t have to be conscious and it doesn’t have to be verbal or a left-brain type of thing. So our guts, which is the largest collection of nerve ganglia outside of the brain, can sometimes pick up information. It’s the translation of information that’s always the problem. ESP covers any sensation. The whole idea of perception is that we perceive things in different ways and we sometimes perceive them kinesthetically.”

When I used to work in advertising, there was a mantra that went around the office: “Perception Is Reality.” Perception is reality. If you perceive something as real, then for you, it’s real. If you have a gut feeling on an issue, or simply know something with no explanation as to why or how you know it, ESP is at work. If you act or react based on those feelings, you just used ESP to interpret that data. Conversely, we can learn to tune out these unique perceptions. If we’re told enough times that what we’re seeing or hearing can’t be real, we may start to believe that, and thus stop perceiving.

I asked Loyd Auerbach about how we can develop our ESP skills further. “There was a psychic I worked with years ago named Alex Tanous, and Alex worked at the American Society for Psychical Research in New York. He told me really good advice and it’s something I’ve heard from other psychics since then. He said you can simply learn to notice what’s already there. This is actually a memory exercise that works to the advantage of learning to be more psychic. He said pay attention to each of your senses for three to five minutes on any given day. So you focus on what you’re seeing, what you’re hearing, you consciously pay attention or tend to the input, and after a couple of weeks you notice there’s this extra stuff that your normal senses can’t account for, and once you start noticing it, you start noticing it more.”

ESP is an inward study. It’s listening to ourselves and paying attention to our environment and human experiences. And if there is a way to extend my sense of taste so I can savor those peanut M&Ms without having to open the bag and ingest all of those calories, I want to know about it. If you see me meditating on the floor of aisle six in the grocery store in front of the candy section, please try to keep quiet and don’t run into me with your cart.