I am allergic to all animals with fur, so when I was growing up, my family couldn’t have a dog or a cat — which is really a shame, because I’m definitely an animal lover. But we made do. I had some interesting pets through the years — chameleons, fish, and the most remarkable parakeet I have ever known.

Couscous was my pet parakeet for 14 years. He had the run of the house, and he would fly to your shoulder when you called him. His vocabulary was not only immense, but sometimes even crude — which got quite the reaction from houseguests. In every aspect, he was part of the family, and when he died of old age, we all cried for the loss.

I’ve spent a lot of time talking about human spirits and ghosts in this column, but what about our pets and other animals? Communicating with them while they are alive isn’t always easy, but can we communicate with them after they have passed on?

I recently got an email from Joseph Pino of Albuquerque, New Mexico, regarding an encounter he believes he had with the ghost of one of his pets.

I’ve had an experience, which for some odd reason I feel is the spirit of one of my cats (maybe an old pet that still loves me?). First let me tell you that it seems to follow me no matter where I reside. The encounter happens when I’m lying in bed, but not necessarily asleep. I will feel something jump onto the corner of my bed, then seemingly walk around in that corner (which cats and other pets tend to do), and then lie down. This doesn’t happen all of the time, but I remember one time when I was younger I called to it to come and lay on the pillow next to my head, and I felt it move, but I do not believe it came to my pillow.

To get more insight into our pets’ psyches and their afterlives, I spoke to Aileen D’Angelo, a Reiki healer and psychic based in Worcester, Massachusetts, who specializes in animals.

Reiki
Reiki is a Japanese art of healing with your hands that was developed by Mikao Usui in 1914. Usui took ancient Buddhist healing practices of working with the divine "Ki" energy and transformed it into something that would be accessible for people everywhere and not just high holy people. A few years later, Usui called his creation "Reiki," and his first healing clinic opened in 1922 in Harajuku, just outside of Tokyo, Japan. 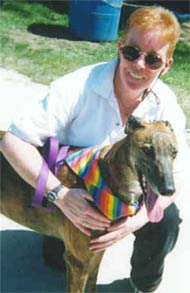 So what exactly is Reiki? As Aileen D’Angelo explains, "The most simple way to put it is that Reiki is a Japanese, hands-on healing technique that utilizes channeling and the energy that’s all around us and focuses it in order to help with the natural healing process of the body."

Originally, Reiki was meant to heal humans, but this power does apply to all living things. "With animals, I have found — I think because they have so much less [emotional] baggage than humans — that they get a real benefit from it, and they’re very open to receiving Reiki," D’Angelo said.

Aileen D’Angelo received her first Reiki treatment in 1996 from a friend of hers who was trying to help her through an inflammation of her medical condition. "I was a big naysayer. I was like, ‘You’re going to lay your hands on me, and I’m going to feel better? Yeah right,’" D’Angelo said. "What I couldn’t deny was that they put their hands on me, gave me the treatment, and I felt better."

D’Angelo then found a Reiki Master and spent the next several years learning the different levels of Reiki. She explained the three levels: "Someone who’s trained at level one can do a hands-on treatment. At level two, the only real difference is you learn the ability to send it over distances, so you don’t actually have to be physically present. And a Master Teacher is someone who really feels drawn to teach this to others."

D’Angelo’s first application of Reiki on an animal was on her greyhound dog. "He was having seizures," she said. "I started using the Reiki on him, and he’s now been seizure-free for three years." Since taking on a steady base of clients, she has performed Reiki on dogs, cats, birds, horses, llamas, sheep, an iguana, a rat, parakeets, and some wild birds — "Basically anything that crossed my path!" she quipped. "I do not condone Reiki as a substitute for either human medicine or veterinary medicine. It’s a complementary therapy that can work in conjunction with those things."

Animal Communication and Healing
The way D’Angelo communicates with animals is to literally get down to their level. She says she opens her mind and her heart and asks the animal’s permission to help them. If the animal refuses her help, she won’t push. This practice can also be sent over long distances, according to D’Angelo, who has clients across the United States as well as in some foreign countries.

So how does this healing energy work over long distances? "What I do is get an image in my mind of who it is I’m sending to," D’Angelo said. "A lot of my distance clients send me photographs of their animals so I can picture them, and if they can’t do that, then I have them verbally give me a description of the animal. I use the human to make the connection across. I envision myself doing Reiki step by step, the treatment on them — picturing putting my hands on different parts of their body."

D’Angelo claims she can sometimes get better results via long distance because the animal is calmer, since there isn’t a stranger present.

Animal Afterlife
Currently, D’Angelo has two greyhound dogs, two cats, and a yellow-naped Amazon parrot. She has had several encounters with the spirits of her former pets, and she also offers to communicate with her clients’ pets that have crossed over. She explained one of her pet encounters: "One of my dogs was a pound puppy that I had adopted, and she and my bird were best of buddies — and my bird talks. So I know she’s visiting whenever the bird gets incredibly animated and starts calling her name. I’ll be sitting in another room, and all of a sudden I’ll hear, ‘Hi Corky!’ and she gets excited and starts jabbering.

"I believe everything on the planet has some kind of spirit."

D’Angelo explains one of her recent pet communications with a dog that was ready to cross over: "I had another client contact me this week because her dog had been very ill and she was getting ready to have her put to sleep. She [the owner] wanted to make sure her dog was ready. So the dog communicated with me and told me that yes, indeed, she was ready to go. She was tired, she didn’t want to fight anymore, and she was ready. They took her to the vet and asked if I would communicate at the time that they were supposed to put her to sleep. I did, and I got a picture of a dog being greeted by another dog in the spirit world, and then suddenly the picture just got cut off. The owners phoned me about a half hour later and said they couldn’t do it.

"She said the dog started acting really happy and wagging her tail. My take on that is that she was seeing the dog that was waiting for her, and then I got cut off because they didn’t go through with it.

"So I communicated with her [the dog] again that night, and she said to help her. That she knows that it’s time to go. And when I talked to the owners, I said she’s telling me she’s ready, and they said they wanted her to give them a sign. So they called me the next morning and said the dog wouldn’t take her medication, she wouldn’t eat, and she wouldn’t follow people around the house, which wasn’t typical behavior for her. So that was their sign, and they had the dog put to sleep that day."

Our pets undoubtedly have personalities, and they dream, they love us unconditionally, and they definitely become members of our families. I would hope to be able to see Couscous again one day in some kind of afterlife. While our pets are still alive and even after they have passed on, people like Aileen D’Angelo are striving to be able to communicate with them better, and make them happier and healthier.