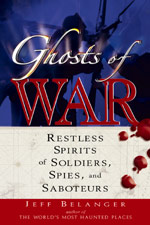 Harold “Pappy” Harmon is a United States Civil War re-enactor. He’s been dressing up as a Confederate Captain and going to battle sites since 1993. He is in charge of The 28th Georgia and 123rd New York Volunteer Infantry — a group of re-enactors based in Resaca, Georgia. “Pappy” Harmon has been to some of the most infamous Civil War battle sites, including Kennesaw Mountain and Andersonville Prison. While Harmon says he doesn’t believe in ghosts, he has had numerous unexplained experiences while at these historic locales.

Harmon and his group were visiting the Kennesaw Battlefields in Georgia on June 26, 2000 — on the anniversary of one of the United States Civil War battles that took place there.

“We were camped out very close to Cheatham Hill and back toward the Texas monument,” Harmon said. “And we decided to go haint huntin’ [‘haint’ is a southern word for ghost or haunt]. So a group of us went out around midnight—there was several of us and a young boy that was eleven or twelve years old. When we got to a certain area of the trail, about three or four of the guys ran off in the woods and just went crazy, just absolutely out of their minds and I couldn’t keep up with them. I stayed with the boy. We went back to the Illinois monument and spent some time up there and then we started back to our camp. By this time it was really dark. We were walking back and we had this big lantern, and one of them had the bright idea to put the lantern out. So we put it out and this is when the boy started seeing the ghosts. This was in an area of the trail where the actual battle of Cheatham Hill was fought.”

Harmon said the ghosts the boy saw looked burned, which coincided with the actual fighting that took place in that location. During the battle for Kennesaw, the field was very dry and the bullets and cannons were causing brush fires. Some of the fallen soldiers didn’t die from their wounds, they died from not being able to crawl away from the fires.

While staying near the Andersonville Prison site in Georgia back in 2001, “Pappy” Harmon and a friend went walking the former prison grounds at night — a site where more than 13,000 Federal soldiers lost their lives due to the harsh prison conditions in 1864 and 1865. “We went down to the creek down there and we crossed over until we were walking along the bottom land,” Harmon said. “We got up on the road and the lady with me turned and said, ‘Hey did you see him?’ And I said, ‘Did I see what?’ She said there was a guy walking with us back there. Well there wasn’t anybody back there — it was just me and her.” This was only one of several similar experiences relayed to me throughout our conversation. The ghost of Confederate Captain Henry Wirz is one of the most common sightings near the old stockade fence, but by no means is he the only restless spirit here.

While researching my book, Ghosts of War, I had the opportunity to speak with many Civil War re-enactors, and I noticed an unusually high number of them had some kind of brush with the supernatural. The witnesses I spoke with don’t consider themselves psychic in any way, they just know what they saw, heard, and felt. By placing themselves in the uniform and the location, and by understanding the details of the battle and the frame of mind of these long-dead soldiers, either consciously or subconsciously, a Civil War re-enactor is opening up to every impression left on a field of battle.

I spoke to author and lecturer Richard Senate about this theory, and he had another: “I think that the whole experience of the re-enactment tends to re-stimulate psychic energy or the leftover psychic traces. The re-enactments themselves might act as a trigger.” Maybe both the re-stimulation and frame-of-mind factors are working together to produce a higher rate of ghost sightings. No matter the cause, the effect is that war re-enactors may be the most likely group of candidates to experience the supernatural on a consistent basis.

Some of the more progressive battle museums and preservation sites have come to not only accept their ghosts, but incorporate them into the program. This is wonderful news. Young school children may show up for an educational field trip expecting to be bored with history and statistics, but they suddenly perk up when they hear that a ghost may be about. The docents and tour guides quickly learn that their ghosts offer an innovative way to teach history. In learning history, we remember and understand the past. I can think of no better way to honor and appease any restless spirits of battle.

Battle sites are hallowed grounds, and one doesn’t have to be a psychic or sensitive to stand in the middle of a battlefield such as Gettysburg, Pennsylvania and imagine what it must have been like for tens of thousands of men who fought and died trying to gain a few feet of precious ground. These were fellow human beings who gave everything they had for a cause they deemed bigger than themselves. To sense and appreciate these bygone spirits today is to simply be human.