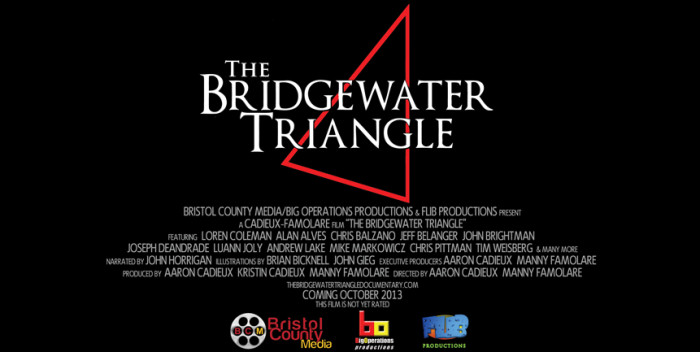 In October of 2013, The Bridgewater Triangle documentary premiered to a sell-out crowd of over 750 people at the University of Massachusetts Dartmouth. One year later, the exclusive US broadcast rights to the film were licensed to Discovery Communications’ Destination America network. The channel will air a 42-minute (broadcast hour) version of the documentary under the title, America’s Bermuda Triangle, a name which they hope will help to draw-in a broader national audience. The film will broadcast on Saturday September 5th at 10:00 PM Eastern Time. Viewers are encouraged to check with their local cable and satellite providers for availability and channel number. To celebrate the occasion, a free viewing party will be held that same night at Christopher’s Lounge at 1285 Broadway in Raynham, Massachusetts. The event is open to the public and will begin at 8:00 PM with a screening of the original 90-minute directors’ cut of The Bridgewater Triangle. At 10:00 PM, Christopher’s many televisions will be tuned in to Destination America as The Bridgewater Triangle (airing as America’s Bermuda Triangle) makes its debut on national television. A number of the film’s cast and crew members will be present at the event.

First named and defined, in 1978, by world-renown cryptozoologist and author Loren Coleman, the 200-square-mile Bridgewater Triangle sits within the Southeastern portion of Massachusetts, and includes a number of locations known for unexplained occurrences; the most prominent of which include the legendary Hockomock Swamp and the infamous Freetown-Fall River State Forest. The triangle’s traditional boarders are revealed by connecting the dots between the town of Abington to the North, the town of Freetown to the Southeast, and the town of Rehoboth to the Southwest. The area hosts an unusually high volume of reports involving strange happenings, baffling mysteries and sinister deeds. From ghostly hauntings and cryptid animal sightings, to UFO encounters and evidence of satanic ritual sacrifice, the Bridgewater Triangle serves as one of the world’s most diverse hotspots for paranormal activity. The first-ever feature-length documentary on the subject, The Bridgewater Triangle explores the history of this fascinating region. The film features a number of local residents providing first-hand accounts of unexplained occurrences. In addition, an all-star assembly of paranormal researchers, folklorists and authors provide expert analysis regarding the many mysteries of the triangle. Among the film’s on-screen personalities are Loren Coleman, and Ghost Adventures writer and author Jeff Belanger.

During its twenty-two month long run, the independently produced documentary, which was filmed entirely in Massachusetts, has been featured on the nationally-syndicated Coast to Coast AM radio show, on WCVB’s Chronicle, on Fox 25’s Zip Trips, and in a segment on WJAR in Providence. The film has also been covered in a number of publications including the nationally-distributed Rue Morgue magazine and the Boston Globe. On the festival circuit, the documentary received the Audience Award at the 2014 Terror Con Film Festival, in Providence, won Best Documentary at the Winter 2015 Macabre Faire Film Festival on Long Island, New York, and won Best Local at the 2015 Granite State Film Festival, in Manchester, New Hampshire. Reviews of the movie have been positive, including eight favorable write-ups from independent critics, and an 8.0 out of 10 stars rating on the Internet Movie Database. In late 2014, The Bridgewater Triangle became available on UltraFlix, NanoTech Entertainment’s 4k movie streaming service.

The film’s producers hope that a successful run on Destination America will lead to additional opportunities, including a chance to be shown on Discovery Communications’ flagship network the Discovery Channel, and the possibility of generating an international interest in The Bridgewater Triangle with overseas broadcast and distribution deals. The producers will also retain the film’s exclusive Blu-ray, DVD and Internet On-Demand distribution rights, and the original 90-minute feature will remain available through their web site www.bridgewatertriangle.com.