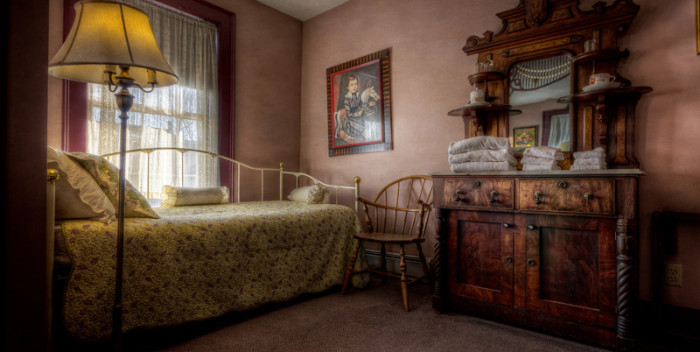 I want to start out by saying that I am NOT a superstitious person. I am an atheist. I don’t really believe in supernatural occurrences, or at least, I don’t want to. But I just can’t explain some of the things that happened in my old apartment in Meadowbrook Gardens.

I lived there for eight years, from 2006 to 2014, and experienced things on and off the whole time.

Some of the things I experienced were doors opening and closing, appliances turning on and off, strange noises, and, finally, at least one time when I actually saw something -– and so did the cat. Several times, other people were with me when these things happened. I tried very hard to rationalize everything while I was living there, and some things do seem to have rational explanations. But I can’t explain everything.

The first strange thing happened shortly after I moved in. I began having really disturbing episodes of what I decided was sleep paralysis. In the middle of the night I would wake up, but I couldn’t move. I would hear the toilet flush (keep in mind, I live alone) and then I’d hear footsteps approaching the bed, the bed would sink down, and I would feel someone stroking my hair and my back. Other times I would feel someone crawling into bed next to me. Then I would jump up and of course there would be no one there. Now granted, at the time I was on an antidepressant that can cause vivid dreams -– I was convinced that it was the antidepressant causing the sleep paralysis, which I researched. If this had been the only thing to happen, I would’ve dismissed it -– but in tandem with everything else, I think it might genuinely have been paranormal –- though I’m not entirely sure.

Also I’d like to note that yes, I was on an antidepressant, but I am not now and have never been psychotic and have never had anything approaching a hallucination in my life. I suffer from depression on and off, but I am definitely not what you would call “crazy” or schizophrenic, or have any mental illness that would explain what was going on. Also, I never experienced any of these sleep paralysis episodes anywhere else but in my apartment.

Anyway, onto the next things -– the cat would act really weird. I would be petting her and she would suddenly jump up and look really intensely at something in the room and follow with her eyes, all around the room, and I’d look and there would be nothing there. I convinced myself that she was looking at dust or a little bug or something that I couldn’t see, since cats have better senses than we do. But it’s another little piece of the puzzle. And the cat’s reaction later, when I actually really saw something in the apartment, would be really striking.

I experienced the closet door opening and closing by itself. Television and lights would occasionally go on and off. Sometimes, in the middle of the night, the toilet would suddenly flush –- while I was up reading, not sleeping, so it wasn’t a dream — this is really creepy when you know you live alone.

One time when a friend was there, there were strange knocks at the door -– I have to explain why this was strange –- my apartment had two doors, an outer door which a visitor had to pass through, then stairs, than an inner door. The knock was on the inner door. When I went to the door there was no one there, and the bottom door was locked. There is no way anyone could have come in and knocked on the top door. I mentioned something to my friend, she was really weirded out, and as soon as I sat down, the knocking started up again. It was three distinct, very loud knocks each time, and we are both really sure that it didn’t come from the walls or another apartment.

I rationalized everything. There had to be a logical explanation. I didn’t believe in ghosts, I didn’t believe there was anything happening, even though the evidence was mounting. But something happened then that I couldn’t deny. I was sitting in bed looking at the hallway when a figure passed in front of the door and walked into the bathroom. I was alone at the time, with my cat sitting next to me on the bed while I was petting her. It happened so fast I didn’t have time to feel afraid, at least not initially. But I’m absolutely certain of what I saw. Immediately, the cat jumped off the bed and ran to the bathroom after this thing that I saw, with her tail held high –- at the time I thought it seemed exactly like she was running to greet one of my friends who often came over and who she knew and liked. I sat there for a few minutes, not sure what to do, afraid to go into the bathroom –- but I lived there, I wasn’t moving out anytime soon, and I knew I would have to go in my bathroom eventually. I did go in the bathroom, and of course no one was there. The cat was sitting on the bathroom floor purring.

At this point I very seriously thought about contacting ghost hunters or paranormal investigators or the very least, trying to capture something on audio or video. But sadly, and I really regret this now that I live somewhere else, I never had the guts. Number one, I was afraid inspectors wouldn’t find anything, and they would think I was crazy, and I would think I was crazy. Or, they would find something, and I would be forced to face something I was trying so desperately to rationalize and ignore. I was just too plain scared – I really regret that now because I had a great opportunity to verify something parnormal and never did. Sadly, I just wasn’t brave enough. I didn’t want to communicate with whatever it was, I didn’t want to think about it, I didn’t want to believe it, I wanted to put it out of my mind and pretend it wasn’t happening. I really really regret that now.

I have rheumatoid arthritis, which is a progressive illness that erodes your joints, eventually the stairs got to be too much for me to handle, so I moved to a first floor apartment in the same complex. I’ve always wanted to go up to the guy who now lives in my old apartment and ask him if he was experiencing anything strange, but I thought he might think I was nuts. I guess I’m kind of a coward.

I should also say that I have a friend who claims she can sense ghosts, and she visited once, and later when I asked her she said she hadn’t felt anything strange about the apartment. But my sister, who is also very sensitive about this kind of thing (she can walk into any place and suddenly know that had a good or bad vibe, or if people said it was haunted, even before anyone told her) said she never liked my apartment and that was why she hardly ever visited me while I was living there. (Though she didn’t say that to me at the time — she didn’t want to upset me.)

Again, I really wish I had done something to try and document these things. Since then I’ve read up on EVPs and wish I had tried to catch one. I was just too scared of what was happening and didn’t want to accept it, because it threatened my whole belief system. So sadly, I guess you have to take my word for it, which I know, in and of itself, is only so convincing.

(NOTE: This Web site asked me to put a date, so I picked one, but all I really remember was that the actual thing I saw was in early June of 2011. Everything else was spread out across all the time I lived there.)