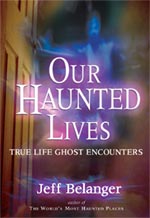 Since I began writing about the supernatural almost 10 years ago, I’ve had the pleasure of speaking with many hundreds of people about their brush with the unexplained. I’ve learned that just about everyone has a ghost story — something they’ve either witnessed personally or a ghost experience they know about that has been told to them by someone close.

I’ve been at parties where people find out what I do for a living and then laugh at me. The laughs don’t bother me anymore, though, because I know from experience that in most cases those same people who laugh will pull me aside later and say, “You know, there was this one thing that happened to me…”

With so many ghosts around, some ask if we even need the words “supernatural” or “paranormal” in our lexicon. If ghosts are as common as they appear to be from all of the recorded accounts, spirits must certainly be natural. Normal. While I understand this line of thinking, I also recognize that until 100% of the population accepts this phenomenon as reality, we need these words to describe those events that are beyond our understanding of everyday life. We should also remember that experiencing the supernatural is a very rare occurrence. The event is special, profound, life-changing. I’m leery of those who claim to see spirits all of the time.

I’ve been called a ghost hunter. I accept that term, though I go about this research a little differently than most of the investigators we see on TV with their myriad of gadgets and computer equipment. For me, my ghost hunting kit consists of four basic items I can’t function without: a notebook, a pen, a hand-held tape recorder, and breath mints (because I talk to the living a lot more often than I speak with the dead).

My tape recorder is my most prized piece of equipment because when I’m speaking with a witness of a ghostly event, I want to concentrate on what they have to say. I want people comfortable that they’re having a conversation and they’re not being judged because of what they saw, heard, or even smelled. The most compelling evidence for the existence of ghosts is when you look into the eyes of someone who experienced them. They know what they saw, and there’s conviction in their voices. When you speak with enough people, you can tell when someone is telling the truth.

Last year I embarked on a mission to document significant ghost encounters. My objective was to speak with people from many different walks of life and find out not only what supernatural phenomena they experienced, but how it has affected their lives. I wanted to present these encounters in the words of the witnesses, leaving the nuances and language of the conversations as intact as possible — because this is how people talk.

I also wanted to look closely at one of the most famous hauntings of all time: the Amityville, New York case from 1975. There have been many books and movies made based (often very loosely) on the events that happened to George Lutz and his family. Some claimed Lutz to be perpetrating a fraud. Others said the house on Ocean Avenue was home to something truly evil. To get the whole story, I spoke with George Lutz himself. We spent several hours going over everything that happened to him from the summer of 1975, right up until present day. Here’s a short excerpt from George Lutz:

There were a number of times I would think a clock radio or something went off downstairs. I heard what I can only term as a marching band tuning up, and at one time it had sounded like they had rolled up the carpet there were so many footsteps down there. So much noise. And you go running downstairs to see what it is or what caused this, and you get to the landing halfway down and there’s nothing, and the dog would be asleep. And he was a young black lab and they’re hyper — they just don’t sleep through stuff, they wake up…

In May of 2006, George Lutz passed away unexpectedly. He was 59 years old. This interview was one of the last major interviews Mr. Lutz gave on his Amityville experiences. I’m honored to be able to pass on his story in his words in Our Haunted Lives.

An accusation that often comes up in the discussion of the ghost experience is that this phenomenon is somehow against religion (particularly Christian scripture). It’s worth noting that many witnesses perceive their ghost encounter as a religious experience. Here’s a short excerpt from Rev. Father Scott E. Kingsbury:

God calls it sorcery and says divination is a sin and we shouldn’t be doing this. In my experience, I didn’t divine anything. I didn’t hold a séance, I didn’t grab a Ouija board—it just happened…. I’m not afraid of the spirit realm. St. Paul says we don’t battle against flesh and blood, we battle against spirits, principalities, and powers of the air. They’re out there. And some of them are not so benevolent, but greater is he who is in me than he who is in the world. I have no fear…

Hollywood would like us to believe that ghosts only lurk in graveyards or old, abandoned houses, but experience tells us this simply isn’t true. Ghosts can be in new homes, in open fields, in grocery stores, even in modern water facilities. I spoke with Jeff Revis who had an encounter while working the overnight shift at the local water plant.

That night that it all happened, I didn’t take my dog. I was totally alone and I was sitting there behind the desk reading a book, and I knew in my gut that something was fixin’ to happen…

One of the most significant types of ghost encounters involves seeing a recognizable person that you know to be dead. When the ghost is that of a relative, the encounter is even more powerful. For millennia people have reported being visited by the spirits of their parents, grandparents, and other kin. Imagine having the experience when you’re only five years old. That’s what happened to young Sierra Gregoire after her Uncle Jimmy died.

It was around 10:30, and I woke up out of a dead sleep. I sat straight up and Uncle Jimmy was just sitting at the end of my bed, and I got really, really scared. I just went under the covers…

Some of the people I spoke with had their ghost encounter within the last year or two. With others, their experience may have been decades in the past, but they still recall the details with amazing clarity because the event was so profound.

Our Haunted Lives is a look at dozens of these very human experiences. I’m humbled by the trust and faith that people have placed in me over the years in telling me of their experiences. In many ways, this book is a close look at my own life. These are the conversations I have regularly with people over the phone, at conferences and lectures, and even while out socially. Do I believe in ghosts? You bet! I have no doubt even though I have yet to come face-to-face with one.