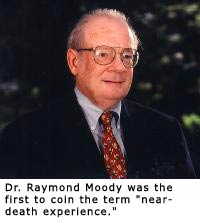 A replay of significant events from your life may pass before your eyes — the process only takes a few seconds, but time seems to slow for you during this progression. Next, you may have an out-of-body experience and see emergency workers or medical personnel working on your body. Then you may see a brilliant, warm, white light and find yourself moving through a dark tunnel toward that light. You may even be greeted by friends and family members who have passed on before you. But in a second, the whole transcendental event can end, and you wake up in a strange place, such as a hospital bed. Your near-death experience is over — your physical body survived.

For many, a near-death experience, or NDE, is a life-altering event. This incredibly personal and profound experience proves to the person who went through it that there is in fact life after death. The rest of us can only trust the person’s account of the experience. To have a similar experience, we would need to be on the brink of death — or would we?

In 1975, Dr. Raymond A. Moody, Jr., Ph.D. published his best-selling book, Life After Life. He was the first to coin the term "near-death experience." After more than 25 years of researching and writing several more books on the topic, Moody has a unique perspective on the near-death experience and the question of life after death. I spoke with Dr. Moody from his home in Alabama.

Moody begins by admitting he doesn’t have all of the answers. "I don’t have any idea whether there’s life after death or not. I’ve been a follower of science all of my life, but I also have a Ph.D. in philosophy, and it really seems to me that the question of life after death is not yet ripe for scientific enquiry because it’s not formulatable in a way that fits into the scientific method. I also think it’s the most important question. If you think of the big questions of existence, this is the biggie."

In 1996, Karen Formella had an NDE on the border of Northville and Plymouth, Michigan. Formella said, "I was in a car accident that I should never have survived. My best friend stopped for a red light. She thought that the light had turned green and proceeded into the intersection. A pickup truck with a snowplow attachment hit the door that I happened to be next to, and the car went flying 500 feet. I remember being in a hallway in the hospital looking in as the doctors were examining me — I could hear their voices. I asked my mom later if that had happened, and she told me that it was the drugs and to ignore it. To this day, no one knows if I died. Other than the hallway, the next thing that I remember is waking up and seeing my dad at the foot of the hospital bed looking really worried."

In his book Life After Life, Dr. Moody describes accounts of many different people who have had near-death experiences. These accounts range from relatively brief events, where a person may see the bright light for only a few moments before getting pulled back into their bodies, to where people report communicating with a presence on the other side. In this communication, some say they were told they had to go back, while others were given the choice of whether to stay or return. Those that chose to come back say they did so because they felt their families would need them, or because they had something important they needed to come back and do.

Dr. Moody’s research has shown him that evidence of near-death experiences go back thousands of years. Moody said, "The ancient Greeks knew all about these, and Plato wrote about them — he writes about how the guy reviews his life and so on." The experience also crosses many different cultures and geographic locations. Moody said, "As I’ve talked to people from all over the world, there does seem to be a very persistent strain — people that go through this just can’t put their experience into words, no matter how articulate they may be. People will also say ‘I have to use this or that word from my culture to characterize this,’ but they will nonetheless put it together in the form of a travel narrative, which often involves a passageway and this light. So I do think that yes, there is a cultural similarity all over the world."

When I was growing up in Newtown, Connecticut, I had a good friend with a father-in-law who was a stroke victim. He had suffered the stroke years earlier and was dead on the operating table for several minutes. I remember him telling me in his slow, southern drawl, which was slowed even further by the stroke, that "I didn’t see no bright light or nuthin’. I was just dead and they brought me back." Obviously, not everyone has these profound supernatural experiences if they temporarily die, and if one does have a profound experience, sometimes it’s not always a positive one. In Life After Life, Dr. Moody discusses a few cases where people attempted suicide and found themselves in a state of unpleasant limbo. The people who had the NDE after trying to take their own lives felt there is a penalty for "breaking the rules."

People who are religiously affiliated and go through the NDE tend to equate the white light with their religion — so a Christian may feel the white light is Christ, or a Muslim may believe it to be Allah, and some atheists do come back from the NDE and find spirituality of some kind. Moody said, "Even though people will tell you that, prior to this, they had no religious beliefs, they tend to actually come back from this saying very strongly that ‘Now I know there’s a God, and there’s a life after death.’"

So how can regular people have this experience of peering over to the "other side" without actually knocking on death’s door? For the answer, Dr. Moody turned again to the ancient Greeks. Moody said, "Many of the ancient Greek historians, travel writers, and dramatists — even Plato — allude to oracles of the dead. They talk about these places where people would go and would seem to converse with their relatives who had passed away. I found out in the 1980s that a Greek classical archaeologist had gone to the place that Herodotus, Homer, Strabo, and many others describe where this most famous oracle was — directly below modern-day Albania — and they dug it up. In their excavation, in the central apparition hallway, they found a big, bronze cauldron. I surmised that what they were doing was inducing altered states of consciousness by gazing into mirrors or clear bodies of water, or other reflective surfaces. You don’t look at the reflections; you just gaze into the depth. I know they still do this in the Middle East today as they polish silver bowls, for example. They gaze into them, and they see visions."

Dr. Moody took this ancient "mirror gazing" technique and created a psychomanteum chamber. The chamber is a very dark room — maybe ten feet by ten feet — with a mirror on one wall and a light behind a chair, providing just enough brightness in the room so one can see the mirror. The user of the chamber sits in the chair and looks up into the mirror. They will see nothing but darkness and a clear optical depth. The experience may last anywhere from 20 minutes to two or three hours. Some people experience something quickly, and others don’t see anything at all.

Jim DeCaro of Trumbull, Connecticut, used Dr. Moody’s psychomanteum chamber and had a provocative experience. DeCaro said, "Two things happened to me. First, the mirror started to go smoky and blurry. Then it started to get backlit red, and I saw rows of silhouettes of people — just heads and shoulders, but they were rows deep. Then, on my second trip into the chamber, something flew out of the mirror and came straight at my head. I’m sitting there trying to relax and trying to get into it, and something flew out of the bottom of the mirror and swooped straight at my head. It was so real that I had to jump out of the way."

Dr. Moody claims that people who have had an NDE and who also went through his device say the experience of seeing departed loved ones in the chamber was just like the visions from their own near-death experience.

Death and near-death is a very awkward subject to talk about. It makes us uncomfortable because the topic reminds us that we, too, will die one day. Seeing an apparition, having a near-death experience, or using a psychomanteum chamber to mirror gaze — all give us that brief visit to the spiritual realm. Those experiences, whether we view them firsthand or hear about them from someone who went through it, give us constant reminders that we are spiritual creatures, and there is more out there beyond death.