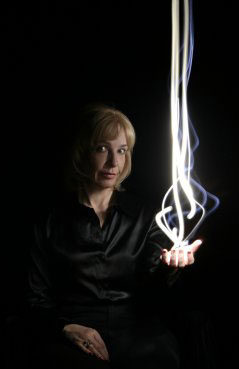 Rosemary Ellen Guiley is one of the most prolific women writers focusing on the paranormal today. To-date, she’s penned 31 books, including eight single-volume encyclopedias, on a wide range of topics. Her work has been translated into 13 languages. In addition to her books, she is a columnist for TAPS Paramagazine; a consulting editor of FATE magazine; an associate editor of JAR, the Journal of Abduction-Encounter Research; a blogger for the Arts & Entertainment site, Paranormal Insider; and consulting editor of Mysteries, Legends and Unexplained Phenomena, a large line of nonfiction books for the young adult audience. She writes for other publications as well.

Rosemary makes numerous conference and college presentations and media appearances, and is featured in documentaries and docu-dramas. She is a member of the League of Paranormal Gentlemen, a group of experts working with Spooked Television Productions on paranormal docu-dramas. She consults with various paranormal investigation groups, and participates in many investigations of haunted places. Rosemary is on the advisory board of The Paranormal Source, Inc., a nonprofit educational organization, serving as Advisory Director of Paranormal and Spiritual Research. She is a past board member of the International Association for the Study of Dreams and the Academy of Spirituality and Paranormal Studies. She is president of her own company, Visionary Living, Inc. She lives near Baltimore, Maryland.

Ghostvillage.com caught up with Rosemary recently to ask her about her perspective on the field of paranormal research today, and the challenges that women face.

Rosemary Ellen Guiley: I was drawn into the paranormal in childhood via three avenues. Psychic ability runs in the family. I think most children have a variety of psychic experiences, but they usually get downplayed or discouraged by adults, and as a child grows older, these experiences fade into the background. In my case, I was fascinated by them. In particular, my mother had dramatic precognitive dreams, which stimulated my interest in exploring the psychic side of dreaming. I wanted to know why people have uneven experiences with the paranormal, and especially why skeptics write the paranormal off as fantasy. It was always quite real to me.

Second, I was passionately interested in astronomy from a very young age, and had an early ambition to be an astronomer. I devoured books on astronomy and did telescope sky gazing well into adulthood with my father. Astronomy brought me into contact with mind-expanding concepts and ideas about what’s “out there,” and about time, other realities, life in the universe, and so on. My interest in astronomy led me into ufology.

Third, I was a voracious reader, and I especially loved science fiction, fantasy and horror, all of which deal with the paranormal. So, I have always been immersed in the unseen.

I didn’t set out to be an expert on the paranormal, but I became one in the course of pursuing my art and vision. After a head-on crash with math, I had to abandon my ambition to be an astronomer. I had always loved writing and was very good at it, and one of my other ambitions was to be an author. Except, I thought I was going to be a novelist. (I have written fiction, both short story and novels.)

After a career in journalism, I quit to write on my own, and within a few years was writing nonfiction books on the paranormal, including encyclopedias. I had found my calling. I love what I do. I spend my time pursuing knowledge in fields that fascinate me, and I write about what I discover. As an artist, I love writing. Those are what drive me — a quest for knowledge and a love of writing.

I’ve done a lot to further my own understanding of the paranormal: besides my usual voracious reading (I have a library of about 4000 books), I attend lectures, conferences and classes. I took a lot of training in psychic and intuitive development, and energy healing, and I worked for years as a professional psychic and energy healer. (Note: I don’t do readings or energy work professionally anymore.)

I wish it weren’t so, but yes, women often have to work harder than men for the same authority status. Sometimes even work harder for less. Not just in this field, but in almost any field. Women have certainly come a long way, but we’re not equal.

Unfortunately there are still pockets of chauvinism, no matter what a woman accomplishes. A male conference organizer once told me that audiences come to hear “guys” talk, not women. I do not think that is true at all, and my calendar every year belies that. In fact, I hear from men and women equally in terms of appreciation of my work.

I think that most of the people, male and female, who are the true leaders in the paranormal are not gender-biased.

In general, women have been conditioned to fall into supportive roles, to let men be in the spotlight while they help from the sides. Women are less likely to seek attention than men, and consequently many of them don’t get noticed as much. I’d like to see women get bolder about showcasing their work and owning their authority.

Consequently, I feel that women are more likely to have a holistic understanding and appreciation of the paranormal. We’re less likely to reduce it to statistics and measurements as the only legitimate perspective.

The paranormal is blurry, subjective, experiential territory. Some of it can be measured and documented, but not all of it. The late Rhea White, an esteemed parapsychologist and the founder of the Exceptional Human Experience journal (she coined the term), is one of my heroines in that regard. She appreciated the science, but she advocated turning more attention to the experiential end — how and why people have these experiences, and what they do with them, i.e., integrate them, reject them, etc., and in turn, how that influences our culture: our folklore, myth, religion, etc.

My own work has always been oriented toward the subjective — the how and why of human paranormal experiences throughout history. I’m not a scientist, but I do follow the scientific research and I think it is very important. It is only one aspect on the paranormal, however.

That we are not competent investigators. I’m referring to lay investigation, not scientific, because that’s my arena. I don’t work in academe or the lab. I wince when I see programs on television where the “girls” are sent home or excluded from entering a haunted location because the “boys” say it’s “too dangerous.” Or, the women are the sole persons on a team who are always assigned to secretarial work or historical research.

Fortunately, there are women out there who head teams and do an excellent job at investigating, and I have had the pleasure of working with teams where the men and women are on an equal footing.

One other thing: I am weary of television shows about the paranormal that always show females screaming and running. Quite often, the production companies instruct the women to do that. Please, stop it. We’re not like that.

In writing your many books, and conducting lectures all over, do you find some areas of the United States where women seem to be more accepted in leadership roles within paranormal organizations?

I can’t say that I see any noticeable geographic patterns. I find women leaders in organizations everywhere.

Yes. The explosion of personal and media interest in ghosts and the paranormal have encouraged that. Not only are more women joining the field, they are taking the helms, starting their own groups. I say this to women — and to men too — if you don’t like how the game is being played, start your own game.

Rosemary’s Web site is www.visionaryliving.com, and she is on MySpace at: www.myspace.com/rosemaryellenguiley. Both sites have her calendar of events.