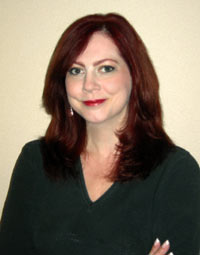 In 1998, L’Aura Hladik founded the NJ Ghost Hunters Society, the largest paranormal investigating organization in the Garden State. L’Aura has appeared on many local radio and cable TV programs including CN8’s Family Talk and Cablevision’s Neighborhood Journal as well as NJ 101.5 FM radio and WNNJ FM radio. She appeared on the nationally syndicated television show Montel Williams for the Sylvia Browne Halloween special on October 31, 2006. In March of 2007, L’Aura and Brian Sandt, NJGHS Techie, were featured on the Treasure HD Network show Magnificent Obsessions for the investigation of Eastern State Penitentiary. Currently, she is writing a book on ghost hunting in New Jersey, which is due out Fall 2008 and has written articles for NJ History’s Mysteries on Ringwood Manor and the Antoine LeBlanc murders.

Given L’Aura’s longevity in this field, and her ability to manage such a large organization, Ghostvillage.com wanted to get her perspective on the role of women in the paranormal.

My Dad introduced me to The Twilight Zone television series when I was a kid. Some of those episodes terrified me, and yet completely held my attention and fascination. My Mom worked in a haunted restaurant as a bookkeeper and told me the ghost stories related to it when I would be there on days I had off from school. Of course, finishing out 8th grade living in a haunted rental house, took my interest to the level of research and my senior term paper was on “ESP & Its Psychic Relations” and it included a chapter on ghosts.

I went away from the paranormal in early adulthood to concentrate on school, career, marriage, and starting a family. I came back to it fully in October 1992 when I took a ghost tour at the famously haunted Spy House Museum in Port Monmouth, New Jersey. By 1993, I was out investigating cases, and in 1998 formed the New Jersey Ghost Hunters Society.

Being a woman has no impact on investigating the paranormal, thankfully. Yet I do notice a significant difference in the attitude of others, whether it be the media, owners of places I want to investigate, or other investigative organizations with males at the helm. Twice now I have witnessed firsthand this attitude or treatment.

First was when my husband and I divorced and I went on to run the NJGHS myself. Granted, I was operating and growing the organization all along, but he had billing as “Co-Founder.” Having that male energy there was the ticket for the media to interview us, me primarily, as credible professionals in the field. Once I was the only name on the business card or fax, it truly was an uphill battle to get cooperation from the media for something as simple as publishing an upcoming meeting announcement in the local newspaper.

Second, I tried for a couple of subsequent years as the sole leader of the NJGHS to get into a certain historic landmark to investigate it. I left countless messages on voice mail and with administrative assistants. I never received a return call, not even a polite “blow off” call. Finally, one day, I decided to test my theory that I was dismissed simply because I was female. So I asked the NJGHS “Tech Guru”, Brian Sandt, to place a call for me. Interestingly enough, he received a return phone call 45 minutes after he left his message. The gentleman representing the historical landmark explained that the site was off limits in the paranormal respect, but appreciated his interest.

Honestly I can’t think of any “unique” challenges in this field as compared to any other for women. It appears to me that we’re seen as “less than,” have to work twice as hard to gain credibility and respect as a man would, and must maintain a cover of Vogue appearance at all times while men can go bald and gain weight with no impact on their career. One only has to flip channels through the news hours on television to see this best exemplified. The news women are young, beautiful, and lately a lot more provocatively dressed than 10 years ago. The news men are in their tried and true suits, gray hair-if they have hair, and severely weathered skin.

The “Old Boys Network” is alive and well in all sections of industry. An interesting news clip on www.womanowned.com illustrates how many business deals are struck on the golf course at the same rate, if not more frequently, than in a board room. Networking is key for success, and yet, in the paranormal field it is sorely lacking. Some investigators are hoarding their evidence and seeking the limelight to be next “Jason and Grant” of SciFi fame.

I honestly can’t say that I had any advantages on a case or in doing research by being female.

We’re all psychic and emotional. Most paranormal teams that I’ve seen on television who incorporate psychics as part of their “gear” almost always have the female in that capacity. And worse yet, she is the one exhibiting all sorts of hysterics and dramatics. It’s interesting to note that when a team has a male psychic, he is presented with more grounded capability — no tears, no fears. I have yet to see on television a female in the Team Leader position. The women are relegated to the administrative positions of “Case Manager,” “Historical Researcher,” etc. The media is feeding the misconception that women are not strong enough to take on the leadership role.

You run the largest ghost investigation team in New Jersey. What’s the percentage mix of women to men in your group? Have you seen an increase in the amount of women who want to join the NJGHS?

Looking at the database of members, it appears to be a slim margin of 55% women and 45% men. If one attends our monthly meetings, it appears to be about 60-65% women in attendance. Yet, it is the men who primarily pursue their Certified Paranormal Investigator status via the hands-on course we offer at Eastern State Penitentiary.

As for an increase in women joining the NJGHS, it’s about the same. Typically it’s the wife who joins because she has a slight interest and is looking for a social outlet from the daily home making and work. Eventually she drags her husband along to a meeting, and from there, I see them “hooked” and vying to be on the investigative teams.

I do think women have gained a little more ground in terms of credibility and being taken seriously as investigators in the paranormal field as compared to five years ago. Personally in that time span, I’ve grown the NJGHS to over 500 members. It’s amazing to see the correlation between the size of the NJGHS and my acceptance by the media. The larger the NJGHS grew, the more easily I got press releases published and the more the media sought me out for interviews beyond the “spooky Halloween” slant. Conversely, much smaller groups headed by men have landed the television series and other deals more readily. It seems to me, that just like in any other occupation, the woman has to be twice as good and/or work twice as hard to equate her male counterpart.

A study in Working Woman magazine years ago showed how even in “traditional female” jobs such as secretarial, a male secretary earned on average 6% more annually than the female in the same job.

I have two Team Leaders who are women, Laura Lindemann and Dina Chirico. I have one married couple as Team Leaders, Gregory and Sherry Irish. I can honestly say that I have just as much confidence in dispatching a team headed up by a female as I do a male. I think women out there need to give themselves a little more credit and step up to the leadership roles rather than buying into the propaganda the media sells.

On September 20, 2008 L’Aura and several other authors and leaders in the field of paranormal study will present workshops at the Paranormal Intensive 2008 in Hackettstown, NJ. For more information and to register to attend this event, visit http://www.njghs.net/paraintensive.html.