Paranormal investigation is a hobby for thousands and an armchair fascination for millions. There are many reasons people become actual investigators. For a lucky few, dabbling in the avocation has lead to local or, in some cases, national fame. Many people feel an quiet, altruistic calling to help others with the unexplained.

For some, ghost hunting is a creative way for families to have together time.

There is a story about a particular family with dynamics so bad that they rarely spoke at home. Imagine the surprise when mom, dad, and son bumped each other on the Ghostvillage boards! This discovery formed a new bond and conversations starting occurring at the dinner table.

There are many things one can say about the paranormal, but here is something not often discussed: ghost hunting can do a family good.

People in the community often bond over shared spectral interest and, in some instances, these individuals take a committed relationship plunge. It is easy to understand why mutual attraction occurs — paranormal investigation deals with big questions such as life after death, metaphysics, the nature of good and evil, and our place in the world. It is natural that couples sharing this spooky passion consider it as relationship enrichment.

That said, ghost hunting can pose problems when interest is one-sided. Investigative team membership doesn’t sit well when one spouse is out at strange locations until late hours. Relationships can be destroyed if one life partner travels alone in the ghost frontier.

The paranormal cracks open exciting possibilities about viewing the world and reveals new ways of thinking. It is difficult when one person in a relationship starts this transformative journey without support. On the flip side, families who share the passion consider it an important bonding activity.

Ghostvillage spoke to three couples that investigate together to get a sense of how paranormal interest fits into relationship dynamics.

Eric Risinger and wife Kim met before they jumped head-on into the paranormal, but they launched their online paranormal talk show PEMA TV (Paranormal Encounters Mid-America) just two months after tying the knot. One can say that this is a lovechild produced by the marriage, although both had interest in the paranormal before meeting one another. 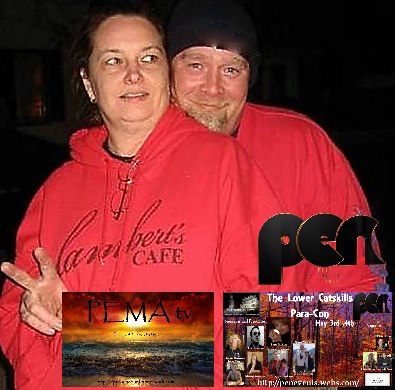 The Risingers each have slightly different philosophies about paranormal phenomena, but Kim feels the differences are complimentary: Eric is more of a “techie” while she is an “old-school dowser.” PEMA TV is a joint effort and they are an emerging husband-wife team covering paranormal conferences and giving platform to research in the community, including Big foot and UFO enthusiasts.

Kim gives advice to other couples in the filed, suggesting that “you have to have a strong relationships to be in the field and to compliment each other.”

Angel and Nicole of CT Soul Seekers have been together for sixteen years. Nicole grew up in a haunted house. Angel developed an interest in 2009 when his mother passed away.

Nicole and Angel share a joint effort in team management, although Angel admits that he takes on more of a “tech” role. The paranormal is truly a family effort. Their 13 year-old daughter, Angie, is also part of the team. 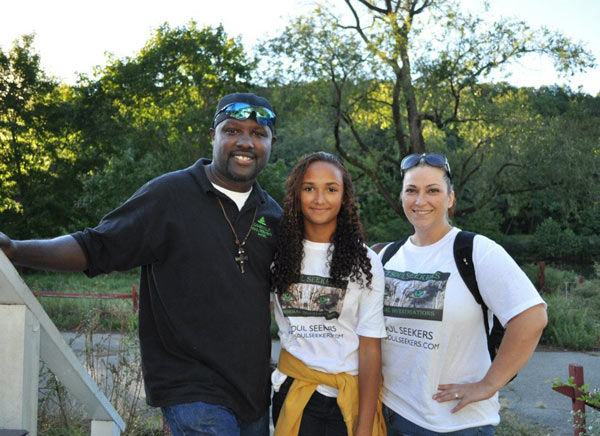 Nicole feels this activity benefits Angie on multiple levels. She explains, “while investigating, she is working on problem solving skills, science, social skills, public speaking, organization, and what it means to be a productive member of society and how to be a team player.”

More than one couple interviewed for this article suggested that their children considered investigation as a coolness factor for parental units. Nicole and Angel are no exceptions. Their daughter says that she likes investigating with her parents. “It is pretty neat that my mom and dad have been on TV and do a radio show. My friends all think that they are cool!” Angie reveals.

Nicole and Angie are an interracial couple. In the absence of many minorities in the field, I asked if they had ever experienced negative reactions. Angel comments, “To me, when we meet people and they find out I’m an investigator, I kinda get a look like the plane is crashing! Black people die just as much as white people, Asians, Spanish, or anybody else. We should be involved and investigating more. I think it’s more of a cultural thing and how we are raised. I’m sure you’ve heard the jokes: a black guy walks into a haunted house and the ghost yells GET OUT. The black guy just runs out….” Fortunately, they both admit that the paranormal community has demonstrated tolerance and acceptance.

Adrian and Tina Scalf of RVPRI

Tina and Adrian Scalf became investigators in their tenth year of marriage. Tina was a believer, but not so Adrian until they moved into an active house. 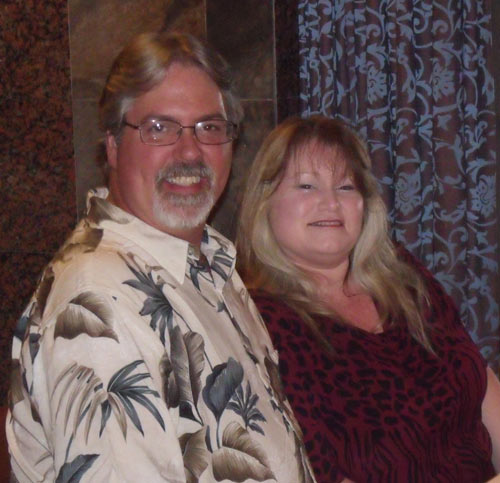 Adrian accounts his ascent into ghost hunting. “Tina had been telling me that the house we were renting was haunted, I openly laughed at her. I actually took it a bit further and openly spoke with friends that Tina thought we had a ghost in our house. I would ask her to ‘tell them about your ghost’ in a mocking way.”

The experiences were profound enough that Adrian reconsidered his staunch skeptical approach. They started a team, River Valley Paranormal Research and Investigation, in 2006 to reflect their unique combination of Adrian’s background in theology as a way to help people deal the spiritual components of paranormal events.

All couples interviewed for the article suggested that they take a skeptical approach in varying degrees, careful to first rule out non-paranormal explanations. But these couples don’t always share exact philosophies. Rather than this being a conflict, all felt it strengthened their investigative unit.

Likewise, they all said one spouse could walk away or take a break from the paranormal without negatively impacting the marriage.

Couples may find investigation a meaningful shared activity, but Adrian suggests that there are potential consequences to this hobby that could negatively impact relationships. He reveals that there was a time the paranormal investigation almost destroyed his marriage.

Adrian shares,”Ghost hunting is not always a non-contact sport. There are things out there that can make your life miserable and it will do whatever it can to ruin you and your relationships.” He was a victim of such an entity that was “not like the movies would have people believe.” The experience was severe enough to develop marital strife.

Tina’s love and tenacity was what kept the couple together. Adrian points out that when he finally realized what was happening, the damage was done. “There is nothing that you can take back stuff after you have done them. Words and actions both leave scars. Of course, there is a lot more to this story. Now, on the other side of that dark time, I can say that we are stronger in our marriage,” he says.

A family that investigates together stays together. Or at least, they do it family-style in the dark.