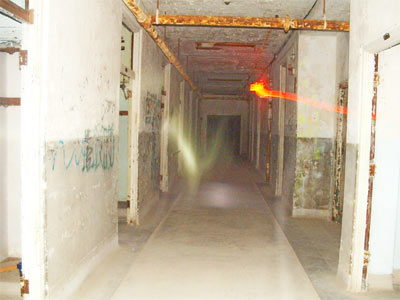 I took this picture on the third floor of Waverly Hills around 3:00 A.M. in the morning. The guide came up from the second floor and said it was time to leave, we are missing three people, and everyone else was down on the second floor waiting to leave. It was me, my wife, and a friend. So when we started to leave, I just turned around and took a picture. Of course it was very dark and I didn't see a thing when I took the picture. I then took a few more pictures of empty rooms on the way to the second floor. I didn't think anything about it until the next morning when my wife was looking at the pictures. She said she thought she could see something in one of them. When we got home I uploaded to my computer. That is when we noticed the picture with a ghost of a woman in it. Then I lighted the picture up [see above], and you could really see her face. Also in two others pictures of the rooms, there was something in them, but I don't know what it is. There were only three of us up there at the time, so no one else was around.