Click on pictures for larger view in pop-up windows. 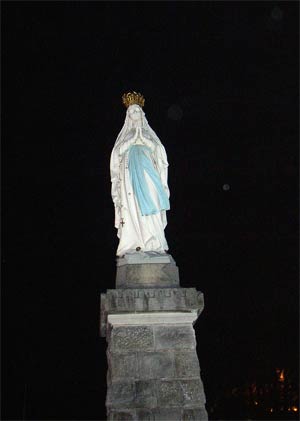 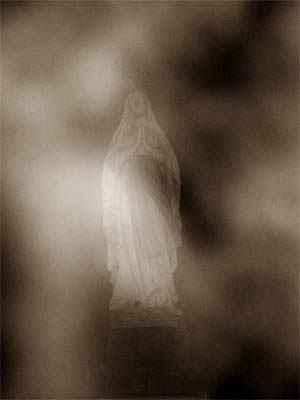 I traveled to Lourdes on February 1, 2005 on business with two friends. My job was to help them decide on a hotel to buy for pilgrimages. Jeannette and Father were Catholics, and I was brought up in the Church of Scotland. My father was a Polish Catholic, but died some years previous. Our journey getting to Lourdes was one delay after another — Father left his Mass kit on the bus, we missed our train, then there was a bomb scare at the station. Four hours later, we arrived at Lourdes and then had to walk to the hotel. At the hotel, all that was talked about was the journey — Jeannette described it as a journey of penance. All I knew was I would not want to be traveling like that again. They were talking about religious experiences — I suppose I was the odd one out.

Then this little Scottie dog came in. My father had done an oil painting when he was younger and hung in my mother's drawing room. This dog even had the same tartan collar. I mentioned this and the dog's owner made the comment, "You do not come to Lourdes, you are brought to Lourdes." It didn't really mean much to me at the time.

That evening we went to look at the grotto. Saturday morning we visited the hotels, and my business was done. On Sunday morning after breakfast the owner asked if Father would take Mass. I was sitting next to Jeanette listening to her conversation while the table was prepared for Mass. I looked around and saw a statue of the immaculate conception being put on the table. I suddenly felt sick, and my whole body became light I had to leave the room. Jeannette asked what was wrong. I explained and we went to her room. At that moment the little Scottie dog ran into the room and jumped up beside me. I did not feel well, but after some time we went down and I sat and watched the Mass with one eye on the statue. After the Mass, we decided to take a walk to the grotto — this was the first time I had seen it during the day. We walked on the other side of the river opposite the grotto. Jeannette was walking with a gentleman who was staying at the hotel (Michael), he was a tour guide for pilgrims. As I walked, my legs went limp again as in the hotel, but as I walked on the feeling disappeared. I walked back and my legs went again. I said, "The statue looks a lot better from this spot." Michael said not many people know this, but around here somewhere Bernadette had her longest apparition experience. At that moment I said to Jeannette quietly, "I want to come back here tonight."

That evening, at 10:00, Father, Jeannette, and myself headed for the spot. As during the day, my legs went light, so I knew we were getting close. For the first time I asked Jeannette to help me pray. The three of us knelt on a concrete bech and prayed. Looking back, it was a very spiritual moment. Without going into my past, my two children had been through a lot. In a way, their mother had not been treating them very well (we divorced). In my simple way, I asked the lady of the house if she would mind looking out for my two daughters. As I looked over at the grotto, I thought I saw our lady wave at me, so I did a little wave back. For some form of reassurance, I said, "Did anybody see her wave?"  The father replied, "Is she not turning her head?" I thought he was just consoling me. I took my camera out and took a picture.

We crossed over to the grotto where I had a little chat with our lady and took two pictures hoping that she would not have red eye. As we left, we stopped at the crowned virgin Mary. I took another picture, but didn't check it until the morning when I noticed the crown on the virgin Mary was all cloudy. Not thinking much of it, I took pictures that night around 11:00 (the night sky was crystal clear on both nights). We left Lourdes and I was picked up at the airport by my friend, Robert. He had to stop off for a message on the way home, so I just sat in the car. I closed my eyes for a rest, then strange things started happening. A vision appeared: as clear as day, I was in the sky looking down on green pastures where people were walking. I was then on the ground at somebody's feet wearing a bright red robe and leather sandals. I am wondering what I am seeing. It is so clear — like watching a video. There was a stone building, a window, and a beautiful women looking in at a crowd of people — I blink my eyes — I see many crosses. I am looking down and the car door opens — Robert arrived. Back at home I wonder if the vision would happen again. I sit on the couch, close my eyes and bright red fire then drops to the ground. Strange images come flying at me, then a beautiful women, a man, and then a small light in the distance is coming toward me. As it gets bigger, a face appears, then pauses, then disappears. Then pictured of Hitler, Stalin, a Chinese person, then African people I did not recognize. I decided to open my eyes.

Later, I was looking at the pictures I had taken at Lourdes. I was showing the cloudy picture to my family from the camera viewer. A picture error then came up, but the strange thing was I had over 140 images on the chip and only 6 had picture errors (the ones from Lourdes). Why six and not one from the rest of the trip, I don't know. I looked at them closer to find at the grotto, as I zoomed in, I saw the eyes and faces I had seen in my visions. My first week back I felt I was in cloud — cuckoo land — but as the images have been explained to me, I am more at peace. These images are still happening and I hope your readers will see what I see in the pictures. I have told this as it happened to me. The camera was an Olympus c300 digital. I'd welcome any thoughts on these.