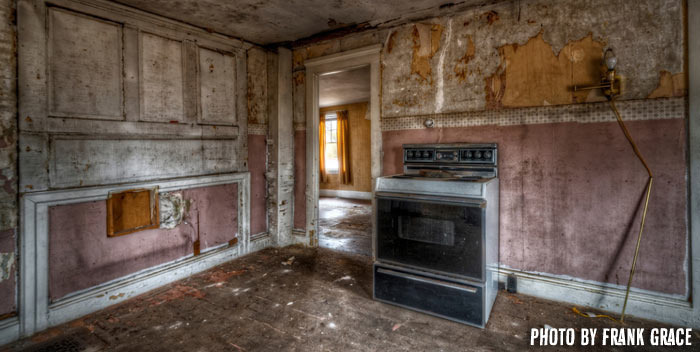 When I got back from Vietnam I went to live with my mother in Chicago. Chicago is where I was born and lived all my life.

My encounter happened either in 1968 or 1969 with a possibility of 1970 also. My mother had a “summer home” in northern Illinois and would go there every weekend. So I would be home in our third floor apartment every weekend by myself. I would usually fall asleep on our front room coach watching TV.

One night I woke up somewhere in the middle of the night and went to the kitchen for a glass of water. As I walked through the doorway going into the kitchen a transparent short haired (or bald) man/boy ran out from our pantry, looked me straight in the eye, almost like hesitated for a split second, and then ran into the gas stove area and disappeared. The look in his eyes was like someone being startled or caught doing something wrong. It was so real that when he ran closely by me I kind of moved back… like if someone was going to bump into you.

It all happened so fast and I just woke up that I really didn’t hit me as to what just happened or what I saw. I just continued to the sink for my glass of water (mind you this all took place in seconds). As I turned on the water and filled my glass and started to drink… it hit me.

Wow! I stopped… I was just in a little shock… I was frighten. Then I thought maybe some intruder was in the house, but no… This figure ran right into the stove and disappeared. And this figure was semi transparent. Needless to say… I was afraid. I thought that maybe because I saw him he would kill me in my sleep, so I couldn’t tell anyone. I stayed up half the night and finally did fall asleep.

One or two years later I found out that The landlord’s son had died in our house. I don’t know what floor or exactly when or how, but I do know it was before my encounter.

My Mother moved out of the house and I got married and went on with my life. I never went back there to see if I could find a picture of the landlord’s son.

For many years I thought about it and wish that I would have gone back, but now it’s too late… this was over 40 years ago now.

I’m somewhat of an artist, not very good, but I did draw a face picture of my encounter. I don’t know what happened to that picture. The vision that I have of him is vivid in my mind to this day. Maybe I should try to draw another picture.

That’s my story… All true… So help me God.
-RGS