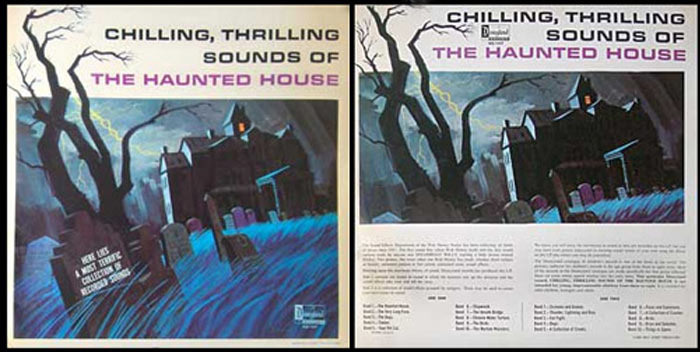 All kinds of weird things used to happen around my house, day and night. I inherited the Disney’s Haunted House record album from my brother when he moved out of the house. I played it for the first time in my bedroom that I shared with my sister.

I had asked my friend if she wanted to listen to it with me. I turned it on. Then she suggested we pull the drapes down and get on the bed with the sheet over our heads so we would be in semi-darkness to enjoy the album more. I figured why not, and we proceeded to do just that. Not much time later, about the second section of the album, she noticed something and asked if it was me doing it. I had my eyes closed, so I asked her what she meant. She asked me if that was my hand. Huh? I opened my eyes and there was a perfect image of a hand on the sheet! Just the hand, no arm attached or shadow of a person on the sheet. I told her to cut it out, that it wasn’t a funny joke. She said it wasn’t her. I looked over at her and she had her right hand above her head holding onto the sheet and then I felt her left arm and hand against my right arm. It scared us half to death! We threw back the sheet, and there was no one there.

I have always been nervous about going into the basement. One day, when I was around nine or ten years old, I was down there with some friends, we were listening to the Disney “Haunted House” album, which was not a bright move on our part.

One of my friends said she saw a shadow of a man near the stairs that led into the house. I went over to her, because from where I was standing my view of the stairs was blocked by a 10-by-10-foot cement foundation block; which acts as a base for the fireplace. When I got to her I looked and saw the shadow of a man in rain slicker and hat. It was like the kind that fishermen wear. He was standing on what would be the third step of the stairs. There is a window to the left side of the stairs about 10 feet away.

There was nothing there to cast a shadow. The only rain gear down there was 12 feet away to the left of the window. It was impossible for it to cast that shadow, and even if it did, the angle of the light coming through the window would have cut off the lower part of the figure. We freaked and ran from the cellar up the outside steps. My mother came outside and asked what was wrong. I told her, and she insisted I show her. Needless to say, I was none too happy about that. We went down to the cellar so I could show her. It was gone, which freaked me out even more. She gave me a weird look and said that it was all right and that she believed me.

I still have the Haunted House album, but I never played it again.