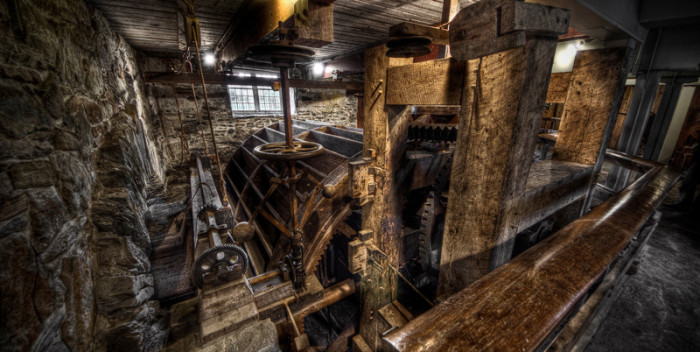 My son has a very unusual job, he is an antique weapons restorer. He works for a prestigious antiques auction house, the weapons he refurbishes are bought by people from all over the world. He has worked there for over 13 years.

The weapons he works on have been used for defense, or have actually killed someone in battle or fights. He also refurbishes old jewelry, adornments, canes, clubs, walking sticks, some torture objects, shields, but primarily weapons. (Not guns, though.)

When he first started working, he was told about some of the strange happenings going on at the shop. People reported strange noises coming from the storage area, objects flying across the break room (a full can of coffee flew off the top of the fridge, landing at least 10 feet away) strange shadows, voices, things going missing, then returning, and the like. It seemed everyone there had a story or two to tell. He wasn’t frightened by any of this, he grew up with me (his mom) as a paranormal investigator, and he has seen and heard many things throughout his life. He took a lot of it in stride!

One of the groups of weapons he works a lot on are from the Viking era: swords, knives, clubs, shields etc. There is a Viking funeral rite that is done when a Viking warrior dies. Their spear’s haft’s are smashed, and knife blades are bent to show the finality of the warrior’s life. These are placed in with other grave goods upon death. When he receives a lot of knives that are bent, one of his jobs is to straighten them out again, so they can be re-sold. There has been discussion in the shop, everyone wondering if this angers the warrior spirits that this is being done to their weapons.

My son brought in my Ovilus, and while running it, when this question was asked, it made a beeping noise, it seems indicating that someone didn’t like this practice! There have been other indicators that spirits are present, EVPs, high readings on the EMF meter, and the appearance of shadows and apparitions, others have seen over the years.

Lately, there have been a lot of noises in the storage area, boxes have been moved, voices heard. This happened after a large lot of weapons came in to be worked upon.

Again my son started asking if everyone thought they were desecrating these weapons by straightening them out? Well, I think he got his answer!

My son was at his work station with his friend Rod across from him. As they were talking about the weapons they were working on, up above on a shelf behind Rod, a Viking axe came smashing down onto his desk! There was a group of axes on that shelf, held in place by these clips, and had been there for more than six months without incident. When it came down, it was so loud that the people in the front office came running out and asking if everyone was alright! Rod was clearly shaken, as was everyone! It had come down with such force to have made that noise. My son and Rod both tried dropping the Axe from the shelf level, and it did not make that much of a sound like it had when it came crashing down! At the time there were four people working in the area, and it freaked everyone totally out!

It took a whole lot of energy to have made that noise. My son plans on doing a mini-investigation, trying to see if a spirit responds to his questions. It has been mentioned that someone needs to come in and do a formal investigation, and hopefully put everyone’s mind at ease.

And they were worried about a spirit named Fritz they got an EVP of on a digital recorder! I wonder what will happen next!