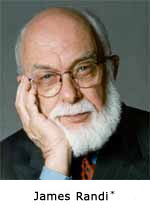 About five years ago, I went on a ghost research expedition in the woods of northwestern Connecticut with a small group. On that trip, I wandered away from the crowd for a few minutes to do my own exploring, and as I turned the corner of a trail, I suddenly saw Elvis, Bigfoot, and the Loch Ness Monster square dancing with each other in the woods.

You don’t believe me? That’s good, because it didn’t happen. But there were people with me on that trip who I think would have believed me had I been able to keep a straight face. People who will believe anything without any evidence are dangerous. Don’t believe everything you hear, or read for that matter — this is common sense. We should all be skeptics to some degree.

When talking about skeptics, one name comes up quite a bit: James "The Amazing" Randi. Randi is passionate about what he doesn’t believe in. He wants proof of the existence of the supernatural, and he’s willing to put up a million dollars for that proof.

I asked Randi for his definitions of "skeptic" and "debunker." Randi said of the skeptic, "Someone who doubts in absence of evidence. A debunker is someone who goes into a situation with the attitude that ‘This isn’t so, and I’m going to prove it to be not so.’ That’s why I don’t accept the term ‘debunker’ to define myself."

James Randi was born in Toronto in 1928. His family halfheartedly tried to apply religion to him, but according to Randi, "I didn’t quite make it. My family was Anglican, which is sort of watered-down Catholic — they didn’t take it very seriously, and I certainly didn’t." Today, Randi doesn’t subscribe to any religious beliefs. "I have no superstitions at all. I’ve never allowed superstition to bother me in any respect. Religion is organized superstition."

At an early age, Randi was inspired by performing magicians such as Blackstone. "It was an experience that stayed with me, and I had to figure out how this was being done," Randi said. "I found out that it wasn’t supernatural, wasn’t paranormal, it wasn’t any of those things. It was tricks." The Amazing Randi, as he is known on stage, performed magic at many venues around the world. He’s performed on The Tonight Show with Johnny Carson and even at the White House. "I know how to fool people," Randi said. "Most magicians do, but they do it mostly for purposes of entertainment. And I know how people fool themselves — and that’s even more important. Because the magician doesn’t ever tell somebody, for example, that this is an empty box. He handles the box as if it’s empty whether it is or not and allows them [the audience] to come to that conclusion. So people fool themselves more than we fool them. That happens in the paranormal field as well, of course."

Many people often asked Randi’s opinion on different paranormal topics. Randi said, "People would be talking to me following shows and what-not and they would say, ‘What about so-and-so?’ and I would always offer my opinion. When I reached sixty years of age, I decided to get out of the magician performing business and went into skeptic mode full-strength and full-time."

When trying to prove or disprove the existence of the supernatural, you are shaking the very foundations of people’s belief systems. Questioning the validity of religion, for example, is something that many people don’t take kindly to. After all, some people partially define who they are by their religion. So does religion have a place in our society? "Yes, a lot of people absolutely require it," Randi said. "They haven’t got the faith in their own abilities, they fear the future, and they are very hesitant to assume that anything that they can decide will be better than some deity who knows everything. Of course, my argument is if the deity knows everything, he would have told you. Not only that, if he’s omnipotent, nothing you say or do in the way of prayer is going to change his mind, and since he’s omniscient, he already knows whether you’re going to pray and what you’re going to say when you pray. It just doesn’t make any sense at all to me."

Randi started the James Randi Educational Foundation in Fort Lauderdale, Florida, in 1996 with a goal to "promote critical thinking by reaching out to the public and media with reliable information about paranormal and supernatural ideas so widespread in our society today." Randi was the first to put up a sizable sum of money to anyone who could prove the existence of the supernatural. He said, "I was offering ten thousand dollars to any psychic who could do what they said they could do. Then a gentleman came along and said, ‘Hey, that’s not much money nowadays… I tell you what, I’ll give you enough money to start an actual foundation.’ I had to think about that for quite a while — like twenty seconds — and I decided that was a good offer."

Randi’s $10,000 prize turned into $1 million, and he began taking his dare to the streets. He has challenged psychics such as Sylvia Browne on Larry King Live, and he has issued his challenge to the world on programs like Dateline and 20/20. He has been an out-spoken critic of homeopathic medicine, faith healing, ghosts, ESP, remote viewers, and religion — especially in regards to mixing church and state. Randi said, "With the present administration, we’re essentially in a theocracy because we have a president who appeals to God and prayer and all kinds of superstitious modalities every opportunity he gets. Anybody in public office, of course, claims all kinds of religious affiliations, and they’re constantly appealing to gods and deities, and spirits, and angels, and imps, and goblins — whatever they happen to appreciate at the moment and depending on what culture they’re in. But that doesn’t mean that they follow it. That just means that they want the people that have to vote for them or approve of them to accept them. Sometimes you get to talk to these people and they say, ‘Oh I know it’s a bunch of horseshit, but I’ll never get reelected if I don’t come out in favor of angels.’"

Randi’s foundation receives an average of 150 applications for the challenge each year. So what does it take to win the million dollars? Randi said, "All they have to do is what they say they can do. It’s that simple. They have to define what they can do, and it has to match the description of being paranormal, or occult, or supernatural — that’s a problem they all have. They can’t define it. They can’t say what they can do, under what circumstances, so they negotiate literally for years."

When speaking with Randi, it becomes apparent that he obviously has strong feelings on what is and isn’t possible. Through our conversation, I began to wonder if he was predisposed to a specific line of thought. Randi said, "I’m predisposed from this point of view: I’m seventy-four years of age. I gave this up when I was about sixty, but say for sixty years I keep watching the fireplace at the bottom of the chimney every December twenty-fourth — all night. And the fat guy with the red suit doesn’t come down with a bag of toys. I’m going to look around and say, ‘Ya know, I think they’ve been kidding me. I don’t think Santa Claus really exists.’ So naturally I’m prejudiced against finding the fat guy in the red suit standing in my living room covered in soot. I’m prejudiced against it from experience — from knowledge of the subject. I can’t possibly claim that I’m not prejudiced against the phenomenon being true because I’ve been with it for many, many years. I’ve seen hundreds of people who tried to prove their claims, and none of them have been able to prove it. That doesn’t prove that there is no such thing, it just shows that I have a prejudice based on experience."

Randi’s million-dollar bet forces the suggestion that many of these high-profile psychics may be fakes. If they were for real, why wouldn’t they go pick up an easy million bucks? This is a strong argument that needs to be taken seriously. But part of the problem is also that you can’t necessarily apply the rules of physical science as we know it today to some supernatural phenomenon.

Part of the problem with skeptics and believers alike is that people tend to see what they want to see. Your expectations can have a big impact on your perception of a situation. Being truly open-minded means going into a situation neither believing nor disbelieving. When it comes to the supernatural, we all have different thresholds of evidence we require to believe. A threshold that is too low is not a good thing — you may find yourself telling your friends you know this guy who saw Elvis, Bigfoot, and the Loch Ness Monster together. I don’t believe an evidence threshold that is too high is necessarily a good thing either. I just don’t want to live in a world without mystery.