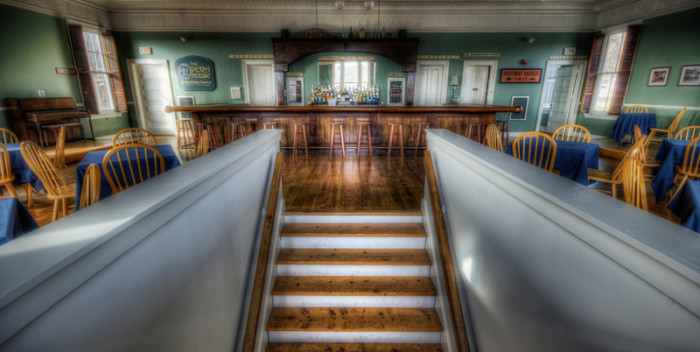 Several years ago as a child around the age of 7 in the town of Wheat Ridge, Colorado, there was a Mexican Restaurant that was operational in the same building that is now known as Clancy’s Irish Bar and Grill. I am now 34, so that tells you how long it has been.

It has been so long that I actually have no recollection of the event that I am about to speak on, but my sister swears that the story is true! It was questionable until several years later my 5 year-old daughter had a similar experience in the same restaurant.

Now let me rewind to the beginning of the story. Keep in mind the building still exists under the current restaurant name of Clancy’s Irish Pub and Grill. My sister is 8 years older than me, and every now and then she would always talk about the event that had happened when I was 7. At that time it was a Mexican restaurant that was very popular and well known. As a family we had gone there one night to eat, and being the ornery little punk that I was, I had wondered off to explore, and ran up the stairs to the next level of the restaurant. The upstairs was apparently closed to customers and is where the restaurant office was held. My sister said she saw me run up the stairs and so she chased after me to take me back downstairs. All she remembers is seeing me stop as if I was frozen at the very top of the stairs for some reason. She called out to me from the bottom of the stairs, however, she said it looked as if I was staring at something and was in a trance and would not budge or acknowledge her. She then walked up the stairs to grab me thinking I was ignoring her. Immediately upon reaching the top she felt a cold chill and said she had also felt extremely uneasy and even scared. She said when she got to the top, the area was very dark but she could see a room with a door open. After having the feeling of uneasiness she scooped me up and rushed down the stairs. She always said she felt like something was up there even though she saw nothing.

A few years later the restaurant closed down and the building was left abandoned for over 10 years until another restaurant decided to take it over again. My family and I were living only a few blocks away at the time and saw that there was a construction crew remodeling the inside and just doing minor touch ups to the exterior. Seeing the remodel I couldn’t help but think about the story my sister would speak about from time-to-time. I told my wife about the story and of course she did not believe it! A couple weeks after the restaurant had been open for business I decided we should go eat there just to see what it looked like after the remodel and to also try the food. When we arrived to the restaurant I picked my daughter up and carried her toward the building. As soon as we got closer to the building my daughter instantly started screaming and yelling, and having a fit even though she was perfectly happy while in the car. When we got inside the restaurant my daughter started screaming even louder, and as we passed the staircase she looked up and pointed up to the top of the stairs while still screaming her head off. We decided to leave shortly after because she just would not settle down. As soon as we got in the car she instantly stopped screaming and calmed down! This may be a coincidence, however the next week my wife and I talked to my wife’s mom while visiting her, and told her of the story of when I was young. We also told her the situation with my daughter when we went there recently. Her mom asked where it was located and after we told her she gave us a very serious and shocked look, and told us a story of her own. Her mom told us that her friend at work had recently spoke about her son doing an electrical job at that same building during the remodel. Her friends son apparently was an electrician and was working upstairs when he heard someone whisper in his ear, “Look outside.” Just after hearing that he heard a crash outside. He ran to the window and saw that someone had crashed directly into his parked work truck! He also had told her that he was the only one upstairs at the time when he heard the voice and then the crash happened. This restaurant also later closed within a month and was then bought out by Clancy’s. Clancy’s is still there and I also believe it is still haunted upstairs. I have always wanted to visit again and speak with the employees just to see if they had any stories of their own, however, I have never been back since!