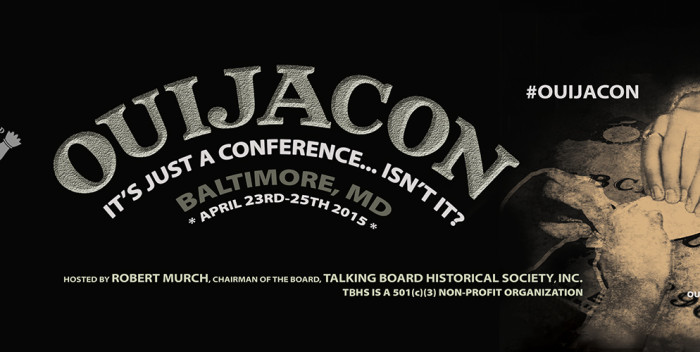 Talking board collectors, historians, paranormal experts, and fans to gather to discuss the world’s most enigmatic “game” in the city where it was born.

BALTIMORE, MD – January 13, 2015 – The Talking Board Historical Society, Inc. (www.tbhs.org), a 501(c)(3) non-profit organization, announced today that it will be celebrating the 125th anniversary of the Ouija® Board April 23-25, 2015 at the Baltimore Harbor Hotel. The purpose of OUIJACON is to bring together talking board collectors, historians, paranormal experts, fans, and enthusiasts for a first-of-its-kind event that will feature symposiums, panel discussions, vendors, and an exhibit displaying some of the rarest and most valuable talking boards on the planet.

The Ouija Board was named in Baltimore, Maryland, and manufactured there by the Kennard Novelty Company beginning in 1890. William Fuld soon took over the company to steer the famous talking board to worldwide acclaim. Millions of boards have been produced over the last 125 years. In 1967 the Ouija Board even outsold Monopoly®, and the talking board has been featured in hundreds of songs, movies, and television shows.

“The Ouija Board has been called a gateway to the other side, a tool for demons, and it’s been labeled as just a game,” said Robert Murch, Chairman of the Board, Talking Board Historical Society, Inc. “On April 23rd, we’re going to celebrate the 125th birthday of the Ouija Board and discuss not only its history, but its effect on popular culture throughout the decades.”

Generically known as talking boards, there is a vast community of collectors who have chronicled the history and lore of these games. OUIJACON will feature a museum of boards, dial plates, spirit trumpets, planchettes, and other items from the Spiritualist movement and beyond.

“We’re holding OUIJACON for the collectors, paranormal investigators who seem to either love or hate this game, fans of Victorian-era séances and Spiritualist devices, and those who have been enamored with Ouija since childhood but may not know the whole story,” said Brandon Hodge, Vice President, Talking Board Historical Society, Inc. “Ouija has been part of our lexicon for over a century. In April, we’re going to tell you why.”

About OUIJACON
OUIJACON will take place April 23-25, 2015 at the Baltimore Harbor Hotel. The three-day conference will include a meet-and-greet party among the most extensive collection of talking boards and Spiritualist items ever assembled under one roof. The event will feature talks by notable historians and paranormal experts such as Robert Murch, Jeff Belanger, Chip Coffey, John Zaffis, Rosemary Ellen Guiley, Brandon Hodge, Dave Schrader, Karen Dahlman, Darren Evans, and more to be announced. All OUIJACON proceeds will go to benefit the Talking Board Historical Society, Inc.

About the Talking Board Historical Society, Inc.
The Talking Board Historical Society, Inc. (www.tbhs.org) began in 2008 as a loose affiliation of talking board collectors and enthusiasts, brought together by talking board historian Robert Murch to bring recognition to the forgotten founders and history of the enigmatic Ouija. In 2014, the TBHS officially incorporated and became a registered non-profit 501(c)(3), naming Robert Murch Chairman of the Board. The TBHS has since worked tirelessly to preserve the history of this unique pop culture phenomenon.

Past projects include raising the funds to erect a Ouija-inspired headstone at the formerly unmarked grave of Ouija patentee Elijah Bond in Baltimore’s historic Green Mount Cemetery, which has since become the historic cemetery’s most-popular gravesite. Their next project is the construction of a grave marker recognizing the medium Helen Peters for her role in giving the Ouija its unique name. Through these projects and others, the Talking Board Historical Society hopes to bring greater and wider recognition to the nearly-forgotten stories and lives of this incredible institution.