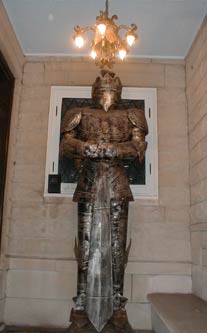 In New Orleans’ Garden District, on a quiet side street off of St. Charles Avenue, lies the Castle Inn – a bed and breakfast that seems plucked out of history. About a hundred years out of history to be exact.

It was a warm Monday night in October, with a hazy full moon casting a soft glow on the mansion when I paid a visit. When I walked up the cement steps toward the door, I was first greeted by a giant and foreboding suit of armor at least ten feet tall on its pedestal, standing guard. At the door, however, the Inn’s manager, Nicholas Franklin, was certainly less intimidating.

Inside you feel like you’re experiencing the Big Easy the way people in the Civil War era may have seen it. The 13-foot ceilings, hardwood floors, and décor make you feel like you have stepped into the past. The Gilded Age, 13-room mansion also hosts two more relics from a bygone era – two spirits have been seen and experienced in the house by staff members and many of the Inn’s guests.

The guest rooms have names like The Jazz Emporium, Napoleon, Miss Blanche’s Streetcar, The Gothic Sanctuary, The Crawfish Den, and The Bordello Room. The Castle Inn’s ghostly guests have been seen all over the house; however, according to Franklin, the second and third floors seem to have the most activity.

The Castle Inn stands on land that was once a plantation in the 1800s. Before the current structure was built, a London-style townhouse was constructed in 1848. It was home to a very prominent local man who was a leader of a group called "The White Man’s League" – a group with ideals very similar to the Ku Klux Klan during Reconstruction times. After his death, the house was torn down. 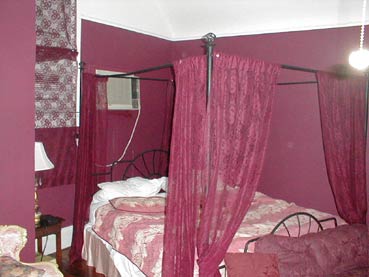 The building that was to be renamed the "Castle Inn" was originally built in 1891. When the most recent owners purchased the property four years ago, much of the furniture and decorations, which had suffered overuse by its guests during its 50-plus years as a transient rooming/guest house, had to be thrown out or given away to a local charity.

The current owners don’t know a lot about ghost stories under previous owners, but they do know what their staff and many of their guests have told them. The two spirits that have been seen are that of a young girl who, legend has, drowned in a nearby pond that was on the plantation before the urbanization of New Orleans. Her spirit has also been spotted in some of the neighboring houses as well. Some believe she wanders the area forever searching for her mother.

The second spirit who reportedly wanders the house is that of a light-skinned black man who was a paid servant. This gentleman was known to speak several languages, be quite fond of the ladies, and also be a bit of a drunkard and a prankster. He died in his bed -lore states that he was either smoking in bed or he knocked over a heating pot and caused the fire. No matter the cause, he was supposedly too drunk to escape the flames. Some psychics who have visited the house believe this man haunts the Inn because he feels he should be in the mansion and not the servant’s quarters. One psychic woman even reported getting a ghostly kiss on the cheek from the man. 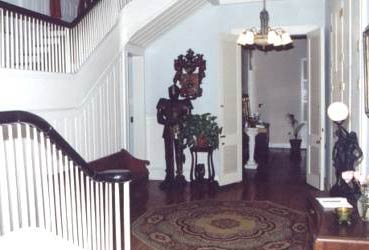 Many guests have experienced the two spirits. Some common occurrences include the bed shaking, lights going on and off by themselves, keys and papers being moved and hidden among other pranks, and the smell of tobacco smoke. John and Aly Brothers stayed in the Jean Lafitte’s Tradewinds Hideaway (Room 9) and experienced both ghosts during their stay on July 27, 2001. An excerpt from their guest book entry reads:

The ghosts kept us up two nights in a row! The first day our TV kept coming unplugged. We’d leave and it would be unplugged when we returned. This happened a total of three times. The second night was amazing and frightening at the same time. We saw this little girl by the stairway. My wife also saw the male black ghost once or twice that night. So we finally got to sleep around five A.M. Oh yeah, we also heard steps running up and down our stairs – and no one else was staying on our side of the mansion that night. Around five A.M., the last thing we heard was a little girl giggling.

Nicholas Franklin, the Inn’s manager, admits he’s not completely sure if he believes in ghosts or not. "I’m pretty skeptical myself, but every morning I hear these people say things like they can’t find their keys and then we go upstairs and find the keys in the microwave," Franklin said. "Or there was one lady who was staying in The Bordello Room and she was fuming because the ceiling fan wouldn’t turn off. Our owner was laughing because it isn’t even wired to be a fan, it’s used just as a light fixture." 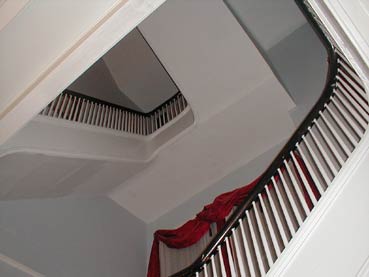 Going up? The staircase to the second and third floors.

But Franklin does admit to one unexplained personal experience: "I was staying in Room 10, and around 11:30 at night some friends and I were watching TV, and the shower came on by itself. And not just a little bit – it was coming out full force. When we went in to check on it, the faucet was turned off at the bottom. That was the only experience that I’ve had personally."

Franklin told me that many people do come to the Castle Inn looking for a ghostly encounter, and some get a little more than they bargained for. "I had one lady call me at two in the morning in tears, asking if I could come walk her out. She was staying in Room 11 (The Crawfish Den), and she said she looked over and there was a man in her bed, smoking. She was hysterically crying and said I don’t want anything but for you to walk me out." 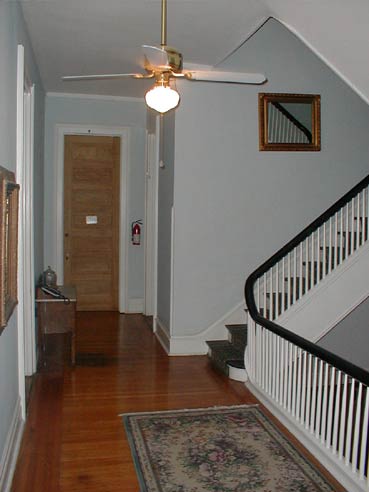 The Castle Inn is located near some very famous places (or infamous, depending on your perspective). MTV’s "The Real World: New Orleans" was filmed in the mansion across the street, Anne Rice lives three blocks away, and the Mardi Gras parade route is half a block away. New Orleans has long been a focus of supernatural activity, and a browse through the Castle Inn’s guest book proves that this bed and breakfast is no exception.

After my tour, I walked out of the Inn, past the suit of armor, and back into the present day. Near the bottom of the steps, I turned around to get one last look at the mansion, and I noticed the chandelier in front of the door seems to form a halo of lights around the giant knight. Maybe he’s not so scary after all…