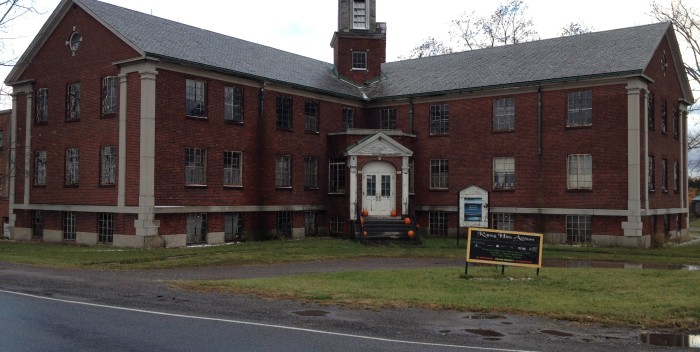 This strange event took place back on October 24, 2015. I had just had my 15th birthday and my Mom decided to take me to the notorious Rolling Hills Asylum which we had heard about on Ghost Adventures. Looking into it, it was just an hour and a half drive away. We decided to take the 3 hour tour and ghost hunt. Pulling up to the location was surreal almost. I spotted it in the distance on the road we were on. It wasn’t huge like some other notable haunted locations but it was a decent walking size. We waited for the tour to begin and walked through all the active hot spots of the location, some of which I had seen before in pictures and video. After the tour we decided to begin the investigation. While it was daytime, the place was still creepy, especially in the lower levels of the asylum.

The first thing that happened to me is what I can only describe as a ghost. In previous experiences, I was able to come up with logical explanations for my previous ghost encounters that may have been the case but for this, I could not.

My Mom and I went into the Women’s Ward, better known as the “Shadow Person Hallway” where dark masses have been seen moving throughout that area. The first room on the left had a couch, two rocking chairs said to move by themselves, a shelf, two chairs, and table and a couple of children’s toys including a volleyball. When my Mom and I walked into the room the volleyball sitting on the floor on the carpet moved toward her and I about a foot or two. Before we went in the room, the ball was stationary. There were some other people out in the hallway but nobody was in that room. It was the first time I had ever seen an object move on its own. Better yet, my Mom had spotted it as well, so I was sure it couldn’t have been my imagination. We both froze for a second and she grabbed my arm and said

I was disappointed I was unable to capture it on video. I had just turned my phone off (which I was using to record) and had only just turned it back on a moment before the ball moved. I wasn’t quick enough. I decided to see if the ball could move again, this time on video. I moved the ball back to its original spot but it didn’t move and there were no drafts in that room. No further communication came from the spirit that moved the ball. We decided to keep moving. We ended up trying again later but nothing came out of that.

Next, if I recall correctly, we went looking for the Organ Room on the top floor. The Organ Room is where the spirit of a girl was in the closet and a doctor named George Flemming passed away in. This room, both my Mom and I felt was the most haunted room here. During the tour, I thought something touched my elbow in that room but I wasn’t certain that I hadn’t bumped it against something. There was a strange feeling in that room, like I was being watched. I opened the closet door and almost expected to find that girl from The Ring but nope, just a creepy doll put in there for the spirit girl. We weren’t getting much and I had wished we had more time there in the place but we again wanted to see more of the building.

We walked down to the lower levels of the building and checked out the Christmas Room where more children spirits are said to haunt. There was a xylophone on the floor and I attempted to talk with the spirits. I bent down and tapped on the xylophone a few times and stood up. I wasn’t certain but a couple seconds later, it sounded like something hit the xylophone. Pretty odd to say the least. While roaming around in the basement, we went over to the morgue.

I thought it would be cool to lay on the autopsy table that was there. Soma people have said they have felt hands on them but I didn’t feel anything. There was a suit on a string that is in the morgue and supposedly you ask it questions about people in the room and the suit will move over to face them. My Mom started asking questions while I was sitting up on the table and I heard two quick shuffling footsteps heading my way. Some people walked in after we had left the room and started asking questions for the spirit to move the suit towards certain people. My Mom and I went back in and the people in the room asked “Can you move the suit to face the people who just entered the room?”

Slowly, the suit moved and faced right at my Mom and I and stopped. Then, a woman began asking questions and it moved towards her.

My final experience here, I was sitting in the wheelchair located in the Shadow Person Hallway. We had to go back before the investigation was over. As my Mom filmed, I heard a noise beside me like a squeak. She said we had to go and began walking away. I heard the squeaking noise take off from beside me and move down towards her, it was following her down the corridor.

Personally, I believe the Rolling Hills Asylum is haunted and it will probably always remain a part of my own history in my life. I do wish to go back to that location sometime in the near future.