Hello, my name is Michael Wright, and we live down in Milton, Florida. We live on a piece of property that is one and quarter acres of land. It was once a salve cemetery back in the early 1800s.

Somewhere down the line, someone removed the headstones, but not the graves. We have had a lot of paranormal actively going on here almost all of the time. Well, last Christmas I added these large statues of Christ and Angels — seen in the pictures .

We have had a lot of ghost investigators come through here and a lot of public too. Everybody enjoys themselves and can not believe what they have caught on film .

Just the other night the temperature was in the low fifties and we got a call around 7:00 at night — three people wanted to come out. They were passing through and heard about our place through Ghostvillage.com.

Now here are three pictures. The first picture is located on the side of our property between two trees and I placed a small statue of Christ there. You can see the guests standing there while I was taking a picture. Look at the ecto going over top of their heads and moving around them. What a great picture this one is. 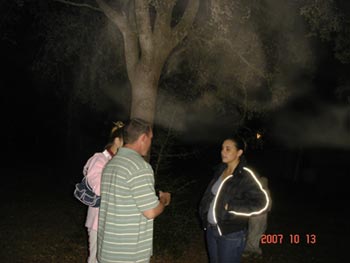 I am known to be as a Spiritualist Photographer, Part Medium. Now the other pictures are located in the back corner where the large statue of Christ is placed.

It is a very large statue and the young man was going to stand by it. Now you can see the ecto all around him and you might see something in the ecto. It's a very unusual picture. Now, when the young man was walking away I thought I would take one more shot and it seems to me that the spirits were following him where ever he goes. 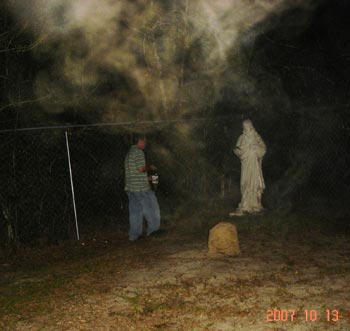 I caught a moving orb in this last picture. The young man is already out of the picture, but you can see that the spirits are following him. This is one of the most unbelievable shots that I have ever taken. 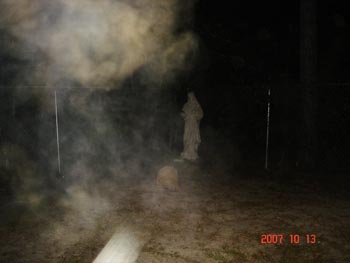