From the Editor: Ghostvillage is pleased to announce Living Voices, a series dedicated to personalities who influenced paranormal research and investigation prior to paranormal reality TV. Living Voices seeks out individuals of all persuasions, from parapsychologists to amateur investigators, whose contributions are often unrealized among the large numbers of paranormal enthusiasts currently defining the contemporary ghost hunting field. This series hopes to celebrate the pionneers who made "ghost hunting" what it is today. Our first installment is Richard Senate, and investigator and author who has been around for a LONG time (and someone who has contributed to Ghostvillage). Thanks for reading!

Digital equipment, highly sensitive microphones, and audio analyzing software are common tools used by today's paranormal investigator. Rewind to 33 years ago and you'll find that none of those gadgets were available. The hefty equipment back then also came with a wagon to tote it around investigations. Richard Senate remembers all too well those early days when he began his involvement in paranormal research in the late 1970's. 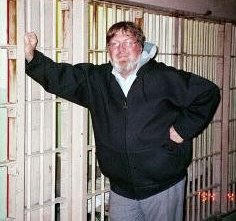 His fascination with the paranormal field began as the California-based paranormal researcher was assisting with an archaeological dig at the Mission of San Antonio de Padua.He found himself confronted with a full apparition of a monk holding a candle walking on a path that intersected with the path he was walking on.

"It was so real that I believed it was a real brother-that is until he vanished before my eyes. I had several small encounters as a child such as seeing a white figure under a tree where a man had hanged himself, but I dismissed them as imagination and not real. I saw a figure of a woman in a mirror once — I guess I was about seven. But the major sighting was the monk."

Richard began to investigate with friends and family in nearby haunted locations and always remained on the lookout for previously unexplored areas. He noticed haunted houses were more common that one would think. Once as a college student at California State University-Long Beach, he and some friends investigated the claim of a ghost girl in the girls' dormitory. But being a young investigator, there were… distractions at times.

"My friends and I got in there to investigate, but being college lads, we were more interested in girls and booze than paranormal investigation. [The alleged ghost] had killed herself so it seems and the room and corridor were haunted. I never did much with this but now I wish I had.

Delving deeper into researching paranormal phenomena, he began to read the works of local parapsychologist D. Scott Rogo, paranormal pioneer Hans Holzer, and Dr. Thelma Ross, who became known for her work in Kirlian photography as well as parapsychology. He was fortunate enough to meet all three during his career and even worked with Dr. Moss on several occasions. Among those that have helped him through the years include Barry Conrad , Lillydale spiritual minister Rev. Edmund Foard, and numerous psychics, including his own wife, Debbie, whom he met in 1983.

The field has evolved since he first began and there is now more group involvement by the community. But he does have some critical concerns of where it is now going. With a higher number of those interested in investigating paranormal phenomena, there will be added issues to deal with.

"I have seen the study grow mathematically in the last 11 years-but I am uncomfortable with the direction," Senate says. "It has devolved into a confused quest for fame and fortune rather than a study of an unknown phenomena. It is now dominated by electronic equipment and gadgets — the growth in this I believe has hampered ghost hunting. EVP is perhaps the best example. I find many groups are poorly led and do not share their data with others."

Senate's concerns echo what many others feel. He explains, "We need to work together as we did in the old days. Too much high school-like drama is found in today's paranormal investigations and too much back biting. I have been a victim of attacks like this. Rumors and such have destroyed good research. One group I know of never shares data and has all their files in boxes under the president's bed. We will never be recognized as real science acting like a bunch of high school sophomores."

And what about the effects of the many paranormal shows on TV today?

Senate expresses that, "…all the problems can be traced to the TV shows. The new people do not innovate. They copy what they see on TV. They fail to see that what's on TV isn't really ghost hunting. It is a TV show with motivations of gaining ratings. TV ghost hunters are celebrities now."

He stresses that media culture doesn't really represent real investigation. Senate explains that "real investigations take days and nights and cannot be done in one hour. Some sites I have visited a dozen times. Much of real ghost hunting is boring and tedious. Not the stuff of TV programs. Hours of boredom with minutes or even seconds of terror. TV ghost shows have spread some bad habits like 'ghost baiting,' yelling and insulting the ghosts in hopes of getting something to happen. It's bad form. It makes good TV but now every ghost group is doing this. Some have even turned to vandalism to get a ghostly reaction. Some of the best sites are closing their doors to ghost hunters or charging them to investigate. This isn't the way it was. We had ethics once."

Richard calls himself "old school" in his belief that there is a place for the metaphysical in the study. He feels the two, the scientific and the metaphysical, can work together and help on any investigation. He adds that there seems to be more of an acceptance of this practice in England and Europe. Senate has worked with many psychics through the years and as stated before, his wife is a psychic medium herself.

He has become a fixture in the Ventura area as a paranormal lecturer, investigator/researcher, and even tour guide to some of the areas most haunted locations. He often leads investigations and tours of the 1847 Olivas adobe structure which he has called one of the most haunted sites on the West coast .There have been reported sightings of a woman in black, a little girl and boy, a monk, and the phantom image of a horse. I can add to that list with my own photo of a little girl I captured in the window of the upstairs room for the children taken several years ago. He also has a ghost tour of the vintage 1912 Ventura City Hall where there have been claims of the ghost of a former judge who passed away there. There is also the wife of a deputy who committed suicide and the spirit of a murderess charged in a 1958 court case that involved the killing of her daughter-in-law. One stroll through the marble-walled structure at night and one can feel the energy within.

Senate believes that "historic events– such as battles –leave psychic scars upon the environment. Unfinished business is a prime cause for phantom encounters. Any place where people have faced stressed is haunted. A background in history is a must for any ghost hunter."

Here is one example: Senate feels that the clashes between different culture groups of Ventura's past, such as the Chumash Native Americans, Spanish missionaries, Mexican settlers, Yankee Americans and later, the Chinese, have created psychic echoes. These may be some sources of various local ghostly reports.

When asked about his most significant contribution to the field, he states this: "The use of historic research in ghost hunting and re-stimulation by re-enacting events of the past is one. I hope my books and media coverage have spawned new interest in the subject. Acting as a spokesman may well be my best contribution, but I leave that to history."

As a self-described "old school" researcher, his approach to paranormal research should be examined and used by new investigators. His use of history as a guide to connecting the past and present is a practice that all should use. If you get a chance to be in the Southern California area, check out his website for his newsletter. You might be able to take one of his guided tours and chat with him about a ghost story or two.