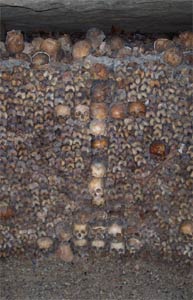 “Avez-vous vu un fantôme?” I asked the man at the ticket counter in my best French if he has seen a ghost. “Je ne sais pas,” was his reply. The man smiled and shrugged his shoulders. Last week, I spent three days in Paris, France and had the chance to visit the Catacombs. I knew there were human bones stacked in the tunnels under the city, but I wasn’t prepared for just how many. I was ready to hear more accounts of the moving shadows and ghostly voices that have been reported in those bowels of Paris throughout the centuries, but I wasn’t ready for how the experience would make me feel.

The Catacombs of Paris are a network of tunnels and caves that run for more than 300 kilometers under the city. To build a city, you need materials. The Romans were the first to quarry the limestone in the area in 60 B.C.E.; however, those quarries were the open-air kind — the Romans just dug out the rock that was exposed. As the city grew and covered the landscape, tunneling would be required to get more building materials. In 1180 C.E., Philippe-Auguste became King. He was a major proponent of tunneling to quarry in order to build ramparts to protect the city, and it was under his rule that this tunnel network would truly be born.

The quarries grew in size and complexity and produced building materials for centuries to come. Quarrying continued with reckless abandon until problems began to arise. In the eighteenth century, the city of Paris (and the weight of its buildings) continued to grow as the ground became more hollow underneath. Some buildings began to collapse and fall into the earth that was opening up below them. On April 4, 1777, the Inspection Générale des Carrières was formed to manage, fill in, or close sections of the tunnels deemed dangerous.

It was during the eighteenth century that a second problem arose for Parisians — the graveyards were getting full… very full. The Cimetière des Innocents (Cemetery of the Innocent) alone held more than thirty generations of human remains.

Taara, as she is known in the Paris underground, is the author of a Web site on the Catacombs. She said, “Families used to pay the parish priest to bury their dead in here [the cemetery near the church]. The priest didn’t want to refuse money, so after a while, of course, there’s no more place [to put the bodies]. So many priests decided to build a sort of house for dead people, which is called a ‘charnier’ [mass grave]. The dead accumulated there.”

As the emerging city enclosed around the cemeteries, there was no place to go but up. Near the end of the life of the Cemetery of the Innocent, as well as several other cemeteries, the ground swelled more than ten feet above the road. The smell was tormenting those who lived in close proximity to the graveyard. Some of the cemetery walls actually broke open, spilling rotting bodies onto the street. Soon after, disease took hold of those living in the vicinity, and people began dying from the pestilence spread by the corpses.

The decision was made to start emptying the cemetery and to place the bones into the network of tunnels under the city. In 1785, when the bones were moved to the underground network en masse, the quarries became the Catacombs. The first quarry that received the bones is called ‘Carrière de la Tombe Issoire.’

Disturbing the dead is a bit of a universal taboo. It’s understood across many cultures that one should leave the dead alone, and many go through great care to perform rituals and ceremonies to see their departed loved ones off to the afterlife. However, the living will usually take precedence.

On a sunny, early autumn day, I walked into the Catacomb museum located off the Denfert-Rochereau Metro stop in the Montparnasse section of Paris. For five Euros, I was on my own and descending into the Catacombs.

I walked 130 steps down a spiral staircase that led me 20 meters below the surface. I first encountered two rooms full of photographs containing images of ancient graffiti from within the Catacombs as well as some of the below-ground structures. After passing through the two small rooms, I was into the actual Catacombs. The ceiling of the tunnel was as low as six feet and as high as about 12 feet. The lighting was very low, but my eyes quickly adjusted.

Very few people were in the tunnel when I took my tour. I passed one young couple who were shining a flashlight into every corner. I took note of the texture and contour of the walls and the crunching of damp gravel under my feet. The only other sound was an occasional drip-drip from somewhere around me — parts of the ceiling were collecting water, and when the puddle got too heavy, it dripped to the ground. 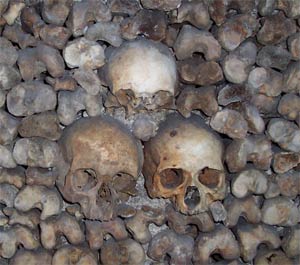 I spotted some dated carvings and some graffiti I couldn’t read, but I kept walking. The tunnel made 90-degree right and left turns, and my pace quickened. I felt as though I were in a tunnel — nothing more. I began to wonder if I was in the right place at all. After a few more long tunnels, rights, and lefts, I approached some painted pillars surrounding a narrow doorway. There was a sign on top. Arrete! C’est ici L’Empire de la Mort — “Stop! Here is the Empire of the Dead.” Due to the difference in darkness between the room I was in and the tunnel beyond, I couldn’t really see what was in there. I paused for a moment and slowly walked into the Ossuary of Denfert-Rochereaux.

In a passage no more than six to eight feet in width were stacks of human bones and skulls. At the doorway they were stacked about four feet high. The empty skulls greet those who enter with empty, but powerful stares.

About three feet in, I stopped completely and looked around me. Nothing but the ornate patterns of bones and skulls as far down the tunnel as light would allow me to see. Within the entire Catacombs, there are more than six million bodies stored — only bones now. I don’t know how many tens of thousands of people were located along the 1.7-kilometer stretch that I walked that day.

In different sections, the skulls formed patterns within the stacks of arm and leg bones. There were crosses made of skulls, Valentine hearts, arcs, and other groupings. The stacking of bones was intricate, symmetrical, and very macabre. I tried to imagine how the people who had to stack these bones must have felt. Dumping millions of human remains down a 20-meter hole is not very respectful of the dead. Perhaps the meticulous care in the arrangement of the remains was the workers’ way of trying to give some dignity and beauty to the deceased.

The place I visited was the official Catacomb museum — the tunnel off-shoots were barred so visitors can’t get lost — but the 1.7-kilometer stretch the museum offers is only a tiny fraction of the entire network. There are bones placed in other sections as well. Taara said, “In the non-official Catacombs, the bones are not placed as you’ve seen them. They are not well-ordered. They are just accumulated in a little gallery. So you have to crawl on them. It’s a very strange sensation, but after a while, it’s not really different than crawling on rocks.” Taara has been a “cataphile” for 17 years. In her younger days, she went into the tunnels several times a week. Now with her job and family, she still gets down below once a month. 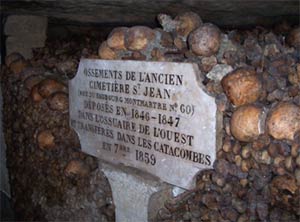 In different lengths of tunnel, there were signs marking which cemetery the particular bones came from, along with the date they were placed. The process started in 1785, and the oldest year I saw was 1859. Though the movement of bones to the Catacombs wasn’t a nonstop process, for at least seven decades, bones were being transferred below ground.

Taara said, “You can find bones in a very small part of the Catacombs. The most interesting thing is that those quarries are the witness of a great part of history. For example, you can still see traces of the Revolution or other important periods like the Second World War. You can see many places that are fabulously architected, the sort of architecture you can’t find now. So it’s really a very lovely place, and we are proud to know those places because most Parisian people do not know there’s another Paris under Paris.”

I did find a few Americans who walked through behind me. I asked what they thought. “It’s a little overwhelming with all of the bones,” said Julie Hardman of Tempe, Arizona. Hardman was there with her daughter, Megan.

A security guard who asked not to be identified told me, “Some people go down and they are very afraid after seeing the bones. Some say they hear things. Voices.”

Near the end of my Catacomb tour, I stopped again and reminded myself that these people all had names. Every one of them was a person. I could think of nothing I could do to acknowledge them at the time. There was no offering I could give to show them some kind of respect. I said a silent prayer and walked up the spiral staircase to the exit. As I sorted through my notes, recordings, and pictures, I came to realize that all I can give them is to tell their story. Those six million people sacrificed their eternal resting ground so the city of Paris could grow and thrive. Noblemen’s bones are intertwined with peasants, families’ skeletal remains may be crushed with their ancestors’ bones, and I walked through all of it. Thirty generations speak to each passerby, forced into a single, collective voice.