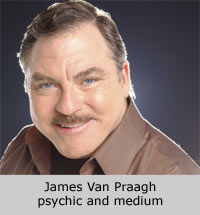 When James Van Praagh was eight years old, he asked God to reveal himself. It was a Saturday morning, and young James was lying in bed in his Bayside, New York home. What happened next would set him on a spiritual journey of self-discovery that would eventually lead him to become a world-renowned psychic and medium.

I recently spoke to Van Praagh from his Los Angeles home. He described this profound spiritual experience. He said, "I just asked God to reveal himself. I was lying in bed, looking up at the ceiling, and a hand comes through — like an open palm. And incredible light — beautiful golden light — came through, and it kind of enveloped me with a feeling of complete peace and understanding."

Raised a staunch Irish-Catholic, Van Praagh took to the Church early. He became an altar boy, and at age 14, he entered seminary to prepare for priesthood. It was in those early days of seminary that Van Praagh said he, "got the overwhelming sense that religion was too limited. That God was beyond these walls. That’s where my sense of spirituality began and my sense of religion ended."

Van Praagh has written best-selling books such as Talking to Heaven and Reaching to Heaven on his experiences with the spirits and the other side, and he hosted the syndicated television show Beyond with James Van Praagh in the fall of 2002. For more than 20 years, he has been speaking and teaching on the subject of life beyond death.

Van Praagh refers to himself as a "survival evidence medium" — his objective is to give proof of the existence of life after death. The proof he offers is through spirit communication. Regarding the language of spirits, he said, "We live in a three-dimensional world, and we’re limited to those dimensions. So we communicate in a way that we understand each other — with words. In the spirit world, because they’re in a different dimension, they have to communicate in a different way. Everything is done telepathically — mind-to-mind communication, which, in a way, is spirit-to-spirit communication. So their spirit is communicating with my spirit on this earth."

Van Praagh discovered his psychic ability and mediumship when he was 24 years old. He met a British medium who saw psychic gifts in James. Van Praagh was told that within two years he would begin utilizing his clairvoyance — being able to see spirits, and clairsentience — the ability to clearly feel the emotions and personalities of those who have passed on. Van Praagh went on to explain the difference between a psychic and a medium. He said, "Every medium is a psychic, but not every psychic is a medium. Every single person, I believe, is psychic to one degree or another, or born with a sense of intuition. Intuition is the language of the soul. Some people are born with a little more sensitivity than most and are able to not only read someone from a psychic perspective but also read the energy around someone — throughput energy. A medium is someone who can do that, but they also attune themselves to a higher level of energy or other dimension. They’re able to be the interface between that higher vibration of energy, or other dimension, and the physical world."

So the language is telepathy, but what does Van Praagh actually see and feel during this communication? He said, "It’s a thought. Many times, along with the thought will come the personality of the individual. If the person was very emotional, there tends to be an emotional feeling behind that thought. They may reveal an image of their face. Or let’s say they were in the military — they may show me a military suit at the same time that they’re sending the thought, the personality, and the feeling. They’ll give me the vision."

Van Praagh said the personalities and emotions of the spirits aren’t very different than people on earth. If one was an emotional person in life, they come through as an emotional spirit. If a person was more cerebral, they will come across that way from the spirit world. He said, "It’s because it’s who they are — and they’re trying to convey who they are to the medium so that there’s evidence of proof of their personality. Many times they’ll come through like a vision — they will show me a scar, let’s say, or a birthmark, or their hairline. Something that the person I’m reading for can relate to."

So why are spirits coming back? What do they have to say to us? Van Praagh said, "Number one, they want to reassure us that they’re alive — they’re not dead. So the grieving process can be sped up. They come back to their loved ones, and they want them to know they’re okay. When they pass over, there’s a life review that happens. And you relive every single moment of your life — you see the good things you did, you see the bad things you did. Many times, there’s a sense of regret or ‘I wish I loved you more.’ They want the loved ones on the earth to know that. They’re sorry for what they did, and they want them to know they love them and they’re still around them."

Van Praagh is also a proponent of reincarnation — the idea that we all have past lives, and we will return again. With so many people on earth, are there enough souls to keep up with the exploding population? Van Praagh said, "There are other forms of life, there are other planets, other solar systems, there’s other experiences and other expressions of life. There are many places we can go back to; this is just one place. You have to remember that your soul being is more than just a physical body. So even though you’re not aware of the other dimensions, it doesn’t mean they don’t exist."

To make the idea of reincarnation even more complex, some believe we not only lived before, but we may be living concurrently and in several different places right now. Van Praagh said, "There are many bodies to us. This is the physical — the densest body we have. Right now, we’re existing on several levels, on several different bodies, but we’re only aware of the physical body. But there’s the spiritual body, mental body, emotional body — there’s layers, if you will, of bodies. And those bodies are in other dimensions.

Reincarnation is not a new idea at all — many cultures and religions have taught the idea for millennia. If we have been here before, how can we find out about our past lives? Van Praagh said, "Many times people can be brought back through regression — hypnotic regression, meditation regression — and they can be brought back to a safe place, a safe environment to observe what they have gone through. For instance, with phobias, we can examine what has occurred to have traumatized them."

We all have some unexplained, seemingly built-in fears, and Van Praagh explained his. "As a kid, I was always afraid of the water. I hate the water, I’m afraid of drowning; I don’t go in the water. I didn’t learn to swim until I was 13 or 14 because I was so afraid. Why does this happen? I had a dream once — I swear to God, it was so incredible — I was a galley slave on a boat with oars, and I was chained with a whole bunch of other guys in front of me and behind me. There was a tidal wave, we couldn’t get loose, and we drowned as the boat went under — we couldn’t get away. That’s my past life.

"There’s some amazing, dramatic, and documented healings that have taken place when people have been regressed. They experience [their phobia] and they see what happens, and then they can be healed in this lifetime."

This idea of never-ending life leads us to how we act and react in our lives right now. It’s the concept of Karma — that each of us gets back the good we put out, as well as the bad. Van Praagh points out that there is punishment and reward for your actions, but you don’t need to wait for death to receive it. He said, "Once you realize that there is no death, how do you live your life on this earth respectively? My job is to help people to live in a mindful sort of way. The good things you do will come back to you. It’s like a rippling effect in a pond, when you throw a pebble into the water. That’s what energy is. The good that you put out there ripples out, and the bad also ripples out."

Van Praagh sees his role as that of teacher in these diverse spiritual matters. He said, "I think any good psychic or medium is someone that really helps somebody to open up their own self — educate them or enlighten them to their own intuitive ability or psychic ability. At least, that’s my role: to help someone open up their own power."