What better way to celebrate St. Patrick’s Day then with a story of a haunted Iris pub! This excerpt is from Troy Taylor’s Weird Chicago (co-authored by Ken Melvoin-Berg and Adam Selzer) and is used with permission from the author.

Walking down Chicago’s North Clark Street today, there are only a few reminders of the old days. These days, the area is a bastion of nice restaurants that cater mainly to tourists. But, in the midst of it, one still comes upon the odd adult book store and dive bar — a lasting reminder that “Clark Street” was synonymous with squalor not too long ago. In fact, lower North Clark has always bounced back and forth between respectability and a distinct lack thereof.

Nowhere is this more evident than at the corner of Clark and Grand, which has been the home of grand hotels, dirty rooming houses, and countless cabarets and strip clubs — often at the same time!

On the northwest corner sits an 1876 Italianate building, currently the home of Fado, an Irish pub featuring furnishings that have been painstakingly imported from several venerable pubs around Ireland. But the decor isn’t the only part of the building that serves as a reminder of the old days — there are ghosts there, too. 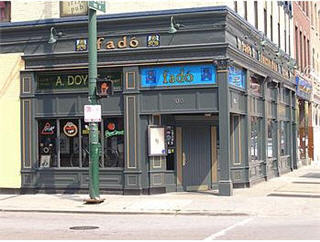 Several staff members have reported seeing the ghost of a woman in a nightgown. She is described as being fairly young, but dressed and made up in such a way as to make witnesses assume that she comes from the late 19th or early 20th century. Especially active around the holidays, she is sometimes blamed for the many electrical disturbances, cold spots, slamming doors, and the sensation of a hand on employees’ shoulders. When Fado first purchased the building, the burglar alarm would go off nightly, indicating that someone had broken into the office on the third floor. No such intruder was ever found, and for someone to break into the office without setting off any of the other alarms along the way would have been impossible.

The woman in the nightgown may not be responsible for all of the ghostly activity in the building, though; other ghosts have been seen as well, including the ghosts of two men in suits on the first floor. These men, according to witnesses, appear to come from the 1950s.

So, who could these ghosts be? Attempts to identify them have been frustrating, mostly because several previous owners quite purposely covered up the tracks of the building’s history.

The building was first constructed in 1876, and has served many purposes over the years. It has been a shoe store, the St. Lawrence Hotel, and several restaurants, saloons, cabarets and strip clubs at various times in its more than 130-year history. Finding actual data on them is rather frustrating, as the owners seem to have been often confused about what number to use as an address. Prior to 1909, it would have been 105 North Clark, on the corner of Clark and Indiana streets. Since the change of Indiana Street east of the river to Grand Avenue, and the 1909 renumbering, the address has been listed in a number of different ways. When the law firm of Conklin and Adler moved into the building, they began to use the side street as the main entrance, and the listing became 100 W. Grand, which Fado still uses today.

Several strange things have happened that may have led to hauntings in the building. In 1953, a waitress working (and possibly living) in the building set a couple of fires there to impress her boyfriend. Apparently, she intended to save his life from the fire she had set herself! She was sentenced to three to ten years in prison, and then escaped after three years. The footsteps found in the mud leading from the prison to the highway are the last traces she appeared to have left behind!

Perhaps the most notorious use of the building came a few years later, when it became the site of the Shore Club, a strip club owned by Mike Glitta, who was described by the police as a crime syndicate hoodlum and the number two man in the Chicago numbers racket. The strip club, it was said, was a front for a syndicate-owned prostitution ring. Mayor Daley himself revoked the club’s liquor license in 1959. Shortly thereafter, the place was described as “a strip club where they don’t take their clothes off anymore” by Slim Brundage, who ran the College of Complexes across the corner. It’s easy enough to imagine that there was murder and suicide in the building at the time, and that the tracks would have been completely erased. The apparitions of the two men in suits may date to this period.

Tracing the woman in the nightgown has proven even more difficult, as covering up traces of crime and death in the building goes back a long time. In 1898, during a meeting of Clark Street businessmen to discuss the decline of Clark Street, it was mentioned that there had recently been a murder and suicide that was so well hushed up that few of the neighbors had even heard about it. Apparently, late one night, a “jealous railroad brakeman” had “a few beers” (blaming all crimes on “a few beers” was a sort of running joke in the area at the time) and used a revolver to murder a woman in a rear apartment before turning the gun on himself. This rear apartment would have probably been on the third floor, where the ghostly woman in a nightgown is most frequently reported. Given the lateness of the hour, it’s certainly not unreasonable to assume that the murdered woman would have been wearing a nightgown.

However, the story was told only in passing, as evidence of how crime was commonplace in the area at the time. Who knows what else may have happened that never made the papers at all? At the same meeting, it was mentioned that at around the same time, two female saloonkeepers had fought in the street, and one, Tillie Wolf, was stabbed through the skull with a sharpened umbrella.

Clark Street began to turn itself around in the early 1980s. Today, the sheer notion of a woman being stabbed in the brain with an umbrella in that area is practically unthinkable. A few reminders still stand: the upscale Clark Street Ale House still displays the neon sign from a previous saloon, the elegantly named Stop and Drink. And, if reports from Fado are accurate, a few ghosts remain, as well.