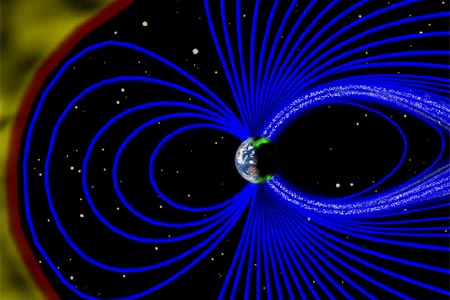 I just returned from the Kent Paranormal Weekend in Ohio. It was a great event at an old, haunted theater. We had the chance to pow wow with each other over ideas and theories about ghosts and monsters, and all the wonderfully weird stuff that gets kicked around at these things.

During a Q&A, someone asked our panel the question: Why do we ghost hunt at night?

It’s a great question. Sure, there are ghost sightings during the day. And you can absolutely look for them with the lights on, but in reality, most of the time it ends up being at night. There are tons of reasons for this. Some of them are practical: many ghost investigators have day jobs and can’t do this work until after hours. Or the place where they’re going to investigate is a business, and only after hours can you better control the location without people bustling about and potentially contaminating any evidence you find. I suppose you can sometimes say the same for private homes. At night there are less cars driving by, and less distractions outside.

The biggest factor for me, though, is the fear factor night offers. Night is the context for scary stories. Night is a time when our precious sense of sight is greatly diminished, making our other senses more keen to protect us from potential danger. Night is when we most often sleep (you know, except during our late teens and early twenties), which leaves us in a vulnerable state. That fear triggers a physiological response in our body. Fear activates our adrenal glands which triggers our senses to sharpen, it hits the hippocampus in our brains—which is tied to storing long-term memories so we can remember this event should we survive, and fear enables our body to get ready for fight or flight.

A little bit of fear allows us to turn to that primal/animalistic part of ourselves and tune in to subtleties in our environment that may very well be there all day long, but we only spot it at night based on a variety of factors. This begs the next question: If we’re scared and jumpy, can we trust our senses? Maybe this is the reason NOT to look for ghosts at night. It’s a fair point. Which may lead us back to how we document our search for spooks.

Though we can’t fully trust our senses, can we trust our video and still cameras? Or our audio recording equipment? The other gadgets we brought along to try and verify our human experience?

At some point we have to look at our own objectivity and selves and make the call on whether something is a ghost or manufactured in our minds. I recall being on a ghost hunt with my friend Dave Schrader years ago in an old jail in Virginia City, Nevada. We had attended a midday wedding that day (yes, there were drinks), then led the ghost investigation for something like six hours. It was around 2:00 AM and I’m looking up on the second floor where there are several jail cells in a row along a narrow walkway. The lights are out, it’s mostly dark in there, and I see this human-sized shadow moving back and forth between a few of the doors contrasting across the white walls in between.

I pulled Dave aside. “Dude, do you see a shadow moving up there by the doors?”

Dave looks, takes a deep, defeated breath and says, “Yeah.. but we’re so damn tired, I wouldn’t believe it if the ghost of Elvis walked up right now.”

Fair enough. Through experience we could be objective enough to dismiss our own senses in that case. Which reminds me, a well-rested investigator is a better investigator. I’m going back to bed!