You know, this paranormal investigating stuff seems really easy to do. You collect and evaluate evidence, learn and share what you find to be possibly paranorma,l and get the opinions of other people in the field of study. Then clean the spirits from the haunted location and move on to the next haunting to be investigated. What about the emotions that are involved?

Often times I sit and reflect upon one particular case our group investigated. It was a little rental house in Cohasset, Minnesota where a young couple lived with what we discovered to be five different spirits. It was the site of tragedy at some point in the past. We believe a mother and her two children were brutally murdered in the basement of this house. 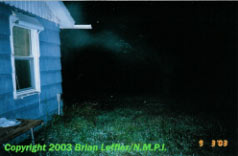 We believe that one of the spirits was the woman’s uncle. He was the bad spirit that killed her and her two children with an axe in the basement. He was accompanied there by who we believed to be his brother, the woman who was in her late twenties or early thirties and her two children, a boy about age twelve and a little girl about age eight.

When we started sifting through all of the collected evidence from the investigation, we found pieces of the spirits of these two children and their mother. We collected electronic voice phenomena (EVP) from the site as well as a few ghostly pictures. The most striking EVP came from the brother, it was the EVP that I have titled “bound” where I tell the spirits they will be bound to the property and he responds by saying, “We are bound, we are not going anywhere.” That EVP, although great paranormal evidence, isn’t what really gets the emotion going for me, it is all of the EVP that was related to the mother and children that does that. We collected an EVP of the little girl in the dining room where she asked, “Mother, can we eat?” As we moved outside the house to the outbuildings, we got more of a feeling of dread. We believe that this was the territory of the mean uncle. We didn’t collect any EVP from him but we knew that he was there, constantly on top of us while we were out there. He refused to go into the house though; it was always a more warm and comforting feeling although sad in there. Through my reflections, I am thinking that guilt over what he had done while living was too much for him to enter the house. This was our first trip to the house and even though being told there was a bad spirit there, the family couple didn’t want to have the spirits removed. That is what prompted the statement of the “bound” EVP. After about a month or so after our first trip to the house, the couple invited us back to the house for the removal of the spirits. I think that they became emotional about the children and the mother and finally agreed with my thoughts that they should move on to the other side and leave this site of horrible tragedy.

We entered the residence and began to try and collect more evidence before we began our cleaning ritual. We started with the outbuildings, yard, and attic. The attic was very interesting since we had to access it with a ladder from the outside of the house. When we later listened to our tape we caught the little girl saying, “Hey, I feel like playing.” When I listen to this EVP even now I can’t help but wonder what her shortened life was like.

When the cleaning ritual started we still kept the tape recorder going. We collected on EVP in particular that still shakes me up. We collected the mother telling her son, “David, go into the light.” It was a strange feeling to hear that for the first time. Not only does it confirm that there is some kind of light involved in crossing over to the other side but there must also be a comfort in it also. I can’t believe that a mother would calmly tell her son to go into the light if she weren’t confident that it was a good thing.

It is sometimes strange when you have had as many ghostly encounters as I have to reflect back on it all. You see, I, as many paranormal investigators do, loose track of the fact that these were once people like you and me. The reason it is strange is because it almost feels surreal at times to think that this voice without a body talked to you, even answered your questions. They show intelligence and cognitive thought. I ask all who read this to be aware when doing investigations that they were people once and they deserve our respect.

The next time you get out to your favorite haunted spot and start collecting evidence of the paranormal, take a step back and try to remember the life that existed before they were ghosts.