This picture was taken on June 31, 2001, which was exactly three days after my step dad passed away. He was obviously still staking his claim on his favorite recliner that we still own to this very day. If you look closely you can see the outline of him sitting in the chair. This image appeared on the picture. When we picked the pictures up from the photo lab, we questioned about the processing of the photos and the lady that personally developed them said that this particular image was something that she has never seen before, so there obviously was not a glitch in their equipment. We also had the negatives examined and we were told that it was not a defect in the film. The people at the photo lab reinforced what we already knew. This is proof that there is life after death and daddy's still hanging around the house sitting in his favorite recliner. 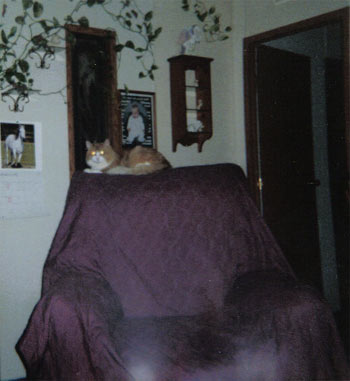