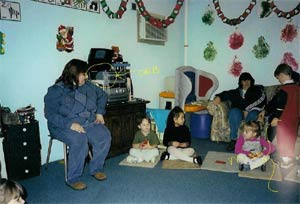 During Christmas 2002 I had taken some photos at my four-year-old's preschool and at home. When I got the film back I was astonished at the number of orbs and mists that appeared on the film. I can see no consistency in the photos that would lead me to believe it is the camera and I also had taken several other photos with the same roll of film at other locations and those pictures had nothing out of the ordinary on them. The only consistent thing that I could find is a dust particle that appears in the upper corner of the photos.

These were taken in Hibbing, Minnesota at the Hibbing Parents Nursery school and Daycare. The Home photos were taken in my home in Chisholm, Minnesota. We have had several "odd" occurrences in our home. We have had many thumps and crashes that we can find no explanation for, along with several of us hearing the voices of a woman and a little girl talking to each other and calling our puppy. Our puppy also barks and growls at "nothing" on frequent occasions. We think that we have a haunted house — take a look and see what you think. We have also had a friend in the house that is somewhat psychic and she has said from day-one that there is at least one ghost here. We call one of them Amanda, as that name just popped into my fiancée's head one day while heading to the basement. We have had tightly shut doors pop open also without explanation.