The old ship is now moored in Long Beach as a floating hotel. But she has a long reputation as a place of ghosts and supernatural happenings. She was an ideal setting for a ghostly retreat put on by TAPS and Darkness Radio. My wife, Debbie, and I attended, but we didn’t expect what happened. Maybe we should have predicted it, after all the ship is one of the most haunted places on the planet.

We were invited to attend the retreat and we saw it as a chance to meet some of the most important people in modern ghost research and touch base with some old friends. What we didn’t expect was a visit from one of the ship’s ghosts.

It was late as we snuggled into our cabin on R-Deck, a place now known for many ghostly events. When we checked into the cabin, it was small and a bit stuffy. I saw it as a rather ordinary place, but Debbie, a gifted psychic, didn’t want to step into the place and even considered having our cabin changed. As the ship was full with the ghost convention/retreat we knew changing rooms was quite impossible. We settled down after dinner and I fell right to sleep. I work up two hours later. The cabin had become ice cold.

In the near darkness I could make out our cabin. We had the curtains open over the port hole and the lights of Long Beach, across the bay, provided illumination. 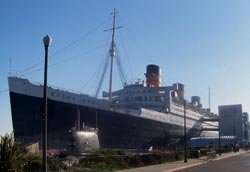 Debbie was sitting up and I could see the breath streaming from her lips. As I became fully awake, the old sensation creped over me. It wasn’t a real chill but that supernatural cold that accompanies the presence of an entity. Debbie was staring at something down the narrow hall.

“What is it?” I asked in a whisper, sitting up in bed.

“She’s there,” Debbie answered nodding her head toward something. I looked and saw something sitting at the vanity down the hall.

It was a sort of silvery outline sitting before the mirror. I stared until my eyes watered as it took form as a semi-transparent, full-form apparition of a young woman. She was looking into the mirror as if putting on make-up. There was a sort of faint glow coming out of the glass that cast some illumination on her thin face. Her hair was cut short, and she seemed to be wearing a light purple slip.

As the image became clearer, the chill raced down my back. It was a feeling I had experienced many times in the past. I always felt it when there are ghosts about.

Debbie reached out and held my arm, I recall that her hand was freezing cold.

“You see her now?” she asked in a whisper.

“I have been watching her for the last half hour,” answered Debbie. “I believe she is getting ready for a party on the ship. Her name is Helen. She is going to meet her love tonight.”

I didn’t ask how Debbie knew these things, being psychic she just did. It wasn’t the first time she had psychically communicated with ghosts, and nine times out of ten, she was right.

“She is sad. This is the one place where she felt happiness, that’s why she returns here over and over again.”

The figure was now almost solid looking in the dim light. The chill was going up and down my back. Slowly the woman stood up in one gliding motion. I saw she was wearing a strand of pearls and long earrings. What I mistook for a slip was really an evening dress. She kept looking into the mirror.

“Helen,” Debbie said in a loud voice that caused me to jump. As my heart leaped into my throat, the woman turned and faced us with a cold, angry glair.

“You need to move on,” continued Debbie. “You’re dead. Your life ended long ago after your Trevor was killed in the war.”

Something inside of me wanted Debbie to be quiet. Don’t confront the specter! Now it was slowly moving toward us.

“Who are you?” she asked with a soft English accent.

“Go on, go toward the light,” answered Debbie.

“Who are you?” she repeated. “I shall call the steward.”

“We are here to help you,” Debbie answered forcefully. “You must move on to the next place. You do not belong here, you need to go on to Trevor.”

“Are you an Angel?” the apparition asked in a voice so low I could barely make out.

“Go toward the light. You are forgiven.” Debbie said in a low voice.

At that, the figure turned slowly and began to glow all over. A bright light surrounded her, and in a moment she was gone and the cabin was dark.

“She’s gone,” whispered Debbie. “She met her lover and fiancé on this ship long ago. Before they were married he was killed at Dunkirk in the war. When she heard of his death she killed herself with gas. That’s why she keeps coming back here, to this cabin. Taking her own life she thought she was going to be sent to Hell.”