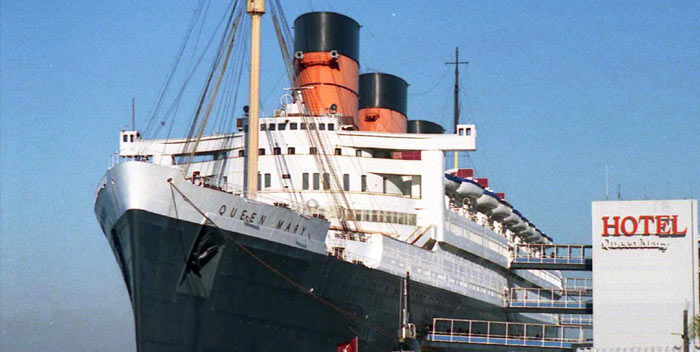 This is one of my numerous experiences with the supernatural. At this time I was young, maybe 10- or 11-years-old. My family: Mom, Dad, and two brothers drove up from San Diego to Long Beach to stay one night at the Queen Mary. We took in the usual tours (no ghost tours), and had a typical site seeing day. Our room was a suite type set-up with two attached rooms which each opened to the inner hallway. My two brothers were in the one large room and I stayed in the connecting room with my parents. They had the master bedroom and I was in the small room which opened out to the hallway. During the Queen Mary’s voyages, this room would have been for the occupants’ maid or valet’s use.

We retired to bed for the night, but I was awoken early, I couldn’t exactly tell if it was early dawn, being I was in the small interior room with no window, but it seemed to be just before sunrise. What awoke me was the maid entering the room from the hallway corridor with towels or clothes she was carrying in her arms. While that’s not so unusual, but she was dressed in old fashioned maid clothes. She wore a long black dress with a white apron and a funny maid hat. As she passed the foot of the twin size bed (remember it’s a small room), she was heading toward the door which was my parents’ room. I sat up as she passed and she looked at me and raised her finger to her lips, leaned over, as if to say shhhhhh, and walked into my parents’ room. The door was open slightly, but had been closed prior at bedtime. I laid back down and fell back to sleep. I never saw or heard her leave. I would have never questioned the encounter, but as we were leaving our rooms in the morning to go to breakfast, we all exited from my room into the hallway and the maids were pushing their carts down the hallway. I looked to my parents and said, “Those maids are wearing different clothes than the maid whom entered your room this morning.” These maids were dressed in modern hotel maid attire: Grey jump dress, no funny hats, no apron. My parents both stopped walking and told me no maid had entered their room that morning, and asked what I had seen?

After describing the event, they both looked at one another mysteriously. As we sat at breakfast my Dad said that there was stories the Queen Mary was haunted and maybe what I saw was a ghost? My only odd recollection from that experience was the room’s atmosphere seemed off. The room seemed to have an amber glow and the pressure in the air was different. But the maid I saw seemed solid and real.