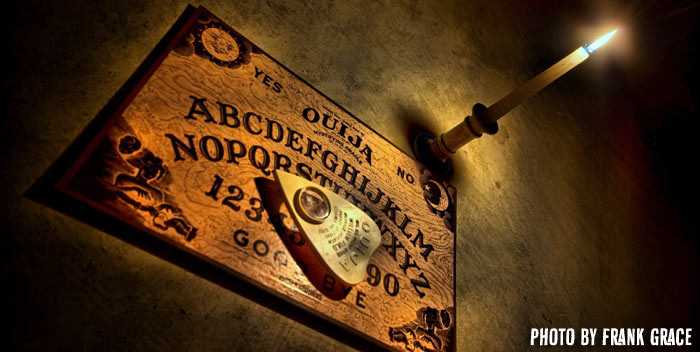 Hey, my name is Maddie. Today me and my best friend Summer had a strange encounter with a malevolent spirit. Let me explain what happened.

A few months ago me and one of my other friends, Alecia met an 8 year old spirit child named Ris through a Ouija board. She seemed like a very sweet and innocent girl, she told us at her own will (and I repeat HER OWN WILL) how she met her death. She apparently got beaten to death by her abusive father. Then a few weeks went by and I introduced Ris to my now best friend Summer, they got along very well. It didn’t seem like she had any sorts of problems with her or anyone she met.

The next day we were playing when we got a call from my friend Amie. Long story short, she had an encounter with a spirit name Sarah. She claimed that Sarah was a very stubborn spirit, it took her hours just to get her to say goodbye. Amie also stated that Sarah seemed like a very lonely, and clingy spirit who did not want to let her go.

Then we made an attempt to contact Sarah through the board, it was a success. After we talked to Sarah for a bit, we asked her if she ever knew Ris. Sarah suddenly stopped moving the planchette, we asked her if she was alright. She answered no. She also said that Ris isn’t Ris. She said that Ris is actually a man named Roger W**** [last name omitted by Ghostvillage.com editor].

We tried to contact Ris/Roger on December 10, 2016 around 2:30 pm eastern time. We successfully contacted Ris. At that period of time he didn’t know that we knew who he really was. Then we did something that we both regret. We asked if she was hiding anything from us. He responded this in his own words.

We simply responded “The internet” In hopes to keep Sarah safe.

Then Roger responded “You lying scums.”

Then the planchette started to circle around the alphabet counterclockwise excluding the letter M. It did not touch the corners whatsoever! Summer and I started to panic wondering what it was trying to do. I thought he simply lost control over the planchette, but Summer thought it was something more because at that time is was spinning around continuously for around 2 to 3 minutes. So I suggested that if we put pressure on it, it might stop it. It just kept going even with pressure, but just slower. But after we lifted the pressure it continued to spin and got even faster.

After a while it just randomly landed on goodbye. Maybe it just got tired or got sick of us panicking. But it would mean a lot to us if someone could shed some light on why it repeatedly spinned around the board counterclockwise excluding the letter M, then randomly landing on goodbye.