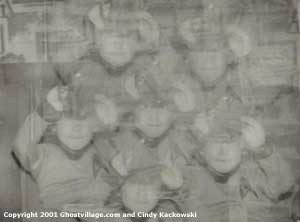 This picture was taken some time in the later 1980's (after '87). It was taken at my brother's house in New Britian, Connecticut.

I was taking a picture of a little girl standing in the living room. When I had the film developed this is how it looked. As you can see, the girl's face is all over the picture. But if you look at it carefully, right dead-center–sometimes your eyes have to focus to it–there is a lady. She is standing and it's her profile you're seeing. It reminds me of Aunt Jemima, as funny as it sound. But you can clearly see her head, eye, nose, mouth and her hair is wrapped up in a bandana. This lady was not there that day, I do not know who it is. I was only taking a picture of a cute little girl in a Star Trek uniform. However, this picture doesn't surprise me as this house has had some other strange occurrences. I had the film examined at a few places and no one has any idea what happened.