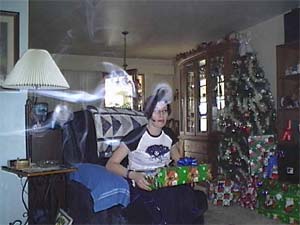 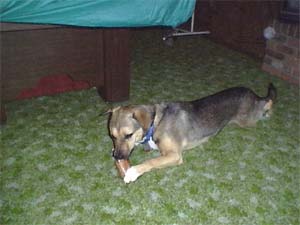 We live in Fairborn, Ohio and I have lived in the house since 1991. There have never seemed to be any strange occurrences in the house that I can recall until I remarried after my wife Marlene passed away in 1999. Since I owned my house it was only natural for my new wife, Terrie and her daughter, Val to live with me. Ever since we got married, my new wife has had several major illnesses and my stepdaughter has heard voices. There have been other strange feelings in the house with cold spots and our two dogs and cat starring off at walls or into space. We decided to take some digital pictures just to see what we could find. The two pictures here are very recent. One, this Christmas 2002 and the other two days later in the family room. We've contacted a local ghost hunters organization and they have reviewed about 40 pictures we have taken containing orbs and what I call fog. They feel we have ghosts here and have agreed to do a study here in a couple of weeks.

The house was built in the 60's I believe. I know that there have been two deaths here in the house. One was the mother of a former owner. My understanding is that she passed in one of the back bedrooms around the age of 80-something. The other death was that of my former wife Marlene, who passed suddenly in the living room where our new recliner now sits.

Terrie and I believe we have two female ghosts but Val thinks there are three — two female and one male. Here is an interesting story about one of the things that has happened here:

One day after school Val was messing around with a sewing machine that belonged to my former wife Marlene. Val was attempting to sew something and had broken two needles. She heard her name called and thought it was her mother coming home from work early. She answered but there was no response. She heard her name again and she answered but again no response. She continued to mess with the machine and she heard her name called out again. This time Val left her room and called out to her mother. She checked the house and no one was there. She called her mother at work to see if she had been home and Terrie told her she hadn't been home all day. Val quickly put the sewing machine away and didn't say anything to us for almost a week when she finally told us what had happened. That was about a year ago and I don't believe it was something she would have made up as she knows she would have gotten into trouble for having the machine out. She hasn't touched the sewing machine since.

Several incidences have happened to me where I have either come around the corner from another room or just happened to look up and there was a fog type area. I remember one night back in October when Terrie was in the hospital for a sleep study (she hasn't been sleeping well since March of last year and has been ill ever since we got married 18 months ago). Val was in bed down the hall and I was sitting in the recliner watching TV. Something caught my eye to the right. At first I thought it was Val out of bed and when I looked over next to me was this pillar of fog. It disappeared just as soon as I looked over at it. Scared the stuffing out of me, I must say.

Terrie believes that the two ghosts are that of the lady who died in the back room and Marlene. We don't feel any threat and actually feel it was Marlene who stopped Val from hurting herself on the sewing machine. Val believes that the male spirit is not very friendly but there has never been anything to substantiate that. We do get some lights flickering but that doesn't happen often and could be attributed to just bulbs getting ready to go out.